During the half-decade of Taiwan's current Tsai Ing-Wen administration, tensions between the People’s Republic of China and the Republic of China (Taiwan) have become increasingly fraught. Cross-straits relations have been on a downward spiral, exacerbated by the hard-line stance emerging from Beijing under President Xi. The skid marks of this fallout have deepened with heightened political and military rhetoric and aggressive military manoeuvres, unseen in the past 40 years.

As the PLAAF grows in strength and sophistication, it has become the chosen instrument for China to demonstrate military muscle and achieve its political objectives through ‘other means’.

GROWING TENSIONS IN THE SKIES

On October 1st, the situation became even more critical when, the PLA sent 39 aircrafts, including fighters and bombers, to fly over Taiwan's air identification zone. Three days later, the PLAAF flew another 56 airplanes into Taiwan's ADIZ. Chinese aircraft sorties have continuously entered Taiwan’s zone over the following days making it a total of 145 aircrafts in a mere four-day stretch of time.

What does this entail? Are these provocative acts indicative of a shift in policy from Beijing or a grim reminder to the self-governed democracy that the big brother is looming on its periphery? It is important to remember that ever since the end of the Chinese Civil War in 1949 when the Kuomintang (KMT) retreated from the Mainland to Taiwan, the Chinese Communist Party (CCP) has made it clear that it would never allow China’s sovereignty to be dented.

Independent observers are keenly watching the rapidity with which China is closing the military capability gap with its arch-rival, the U.S. They may view the dramatic uptick in intrusions into Taiwan' ADIZ as not only indicative of Chinese confidence in its military capacity, but also its resolve to resort to a kinetic means to achieve geopolitical goals. 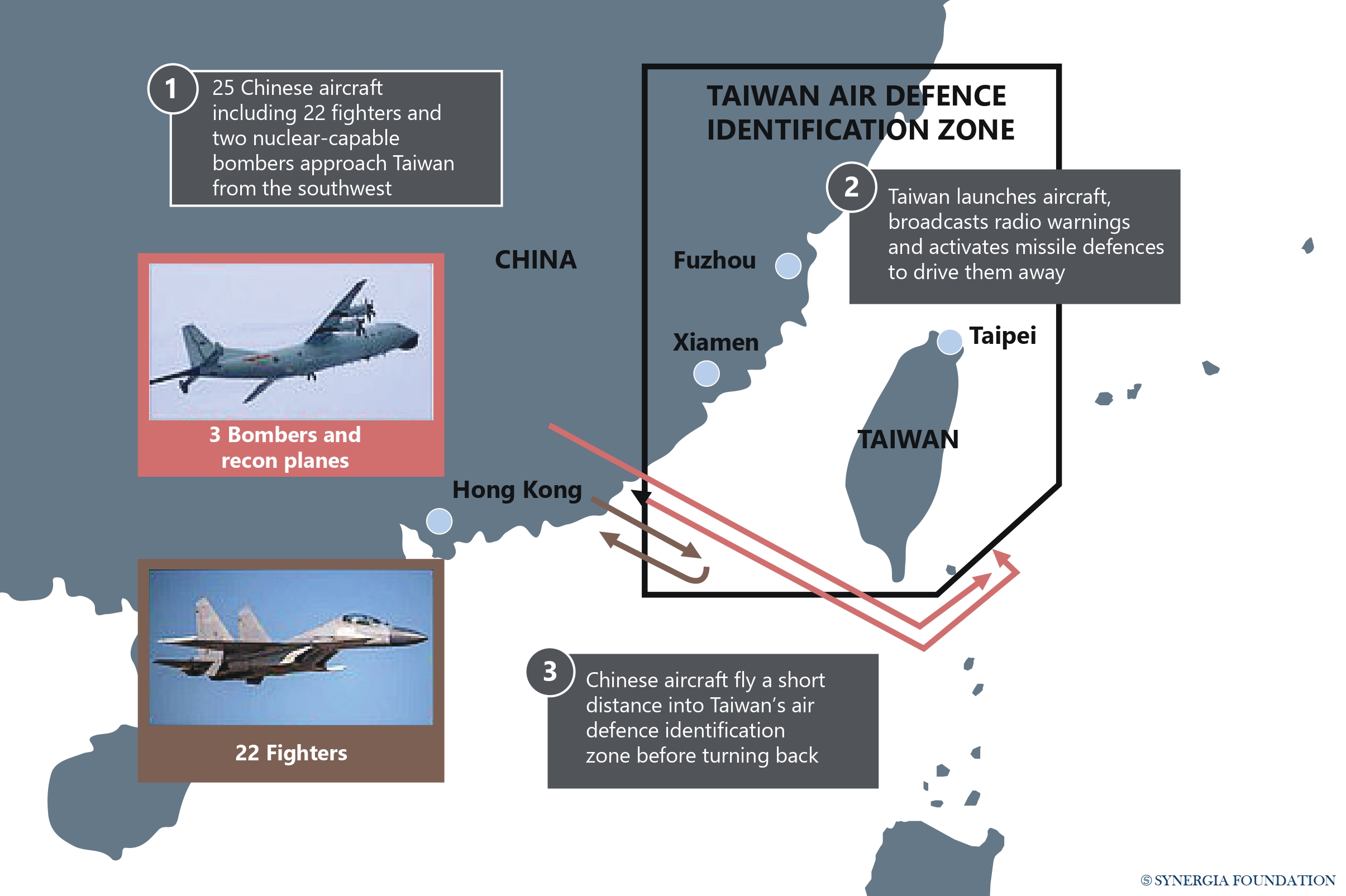 However, even though the number of incursions by Chinese aircraft into Taiwan's ADIZ is on the rise, it is unlikely that the PRC intends to start a full-fledged military conflict or even an amphibious invasion of Taiwan in the near future. More likely than not, these demonstrations of power and intimidation tactics are essentially symbolic and political.

Beijing has a tendency of using displays of military force as a signalling exercise rather than as a preparation for attacks. In the past, escalations in PLA sorties conducting manoeuvres and "exercises" have been associated with political events (such as U.S. arms sales or the domestic political situation in Taiwan).

Beijing has a unique way of communicating displeasure to adversaries and competitors, usually by leveraging its military power. An example of this behaviour is when the U.S. Health and Human Services Secretary Alex Azar visited Taiwan last summer. China’s reaction was to deploy two fighter jets across the Taiwan Strait to record its displeasure. However, these actions could also be seen as a way for China to measure the U.S.’s response and resolve in the region.

It is critical to bear in mind that the latest incursions coincide with the National Day Celebrations of the PRC and Double Ten Day in Taiwan, it's National Day. Beijing’s National Day celebrations are usually combined with a display of its military force. Around this time of the year, with the unveiling of homegrown technologies such as the WZ-7 high-altitude reconnaissance drone at the Airshow China 2021 in Zhuhai, the PLA “is nearing the end of this year's training cycle and going out with a bang, so to speak” (Glaser, 2021).

Furthermore, this could be seen as a long-expected reaction to the build-up of unease, frustration, and tension from the Chinese point of view in relation to the U.S. and its allies’ actions in the Indo-Pacific, harkening to US FONOPs, carrier strike group drills, the AUKUS / QUAD alliance, and others. These incursions cost Beijing near-to nothing and adds to its political calculus. With the benefit of intelligence-gathering and low expenses, these actions are likely to continue, especially at a time when the U.S. and its partners are building alliances which do not include China.

The Taiwanese Mainland Affairs Council (MAC), which is the body in charge of “overall planning and handling of Mainland affairs”, has accused Beijing of seriously damaging the status quo of peace and stability in the Taiwan Strait. “We demand the Beijing authorities immediately stop its non-peaceful and irresponsible provocative actions,” said a statement from MAC (BBC, 2021).

For its part, the Ministry of National Defense, R.O.C. stated that the Taiwanese air force scrambled aircraft, issued radio warnings, and deployed air defense missiles systems. President Tsai also stated that while Taiwan does not seek confrontation, it would do whatever it takes to defend itself (Cheung & Lendon, 2021). On the speech given by President Tsai on October 10th to mark Taiwan’s National Day, she said that Taiwan will not bow to pressure by Beijing and will defend its democratic way of life. She added in the same speech, “the more we achieve, the greater the pressure we face from China, nobody can force Taiwan to take the path China has laid out for us” (Gibson, 2021).

The tensions over Taiwan are the most worrying aspect of the U.S. -China rivalry, and any military clash here could quickly spiral out of control. Friends of Taiwan are concerned about this increasing tendency on the part of China to play a dangerous game of brinkmanship.

The U.S. Department of State has denounced China’s military activity as provocative, arguing that the flights undermine regional stability (DePetris, 2021). Australia’s Department of Foreign Affairs has also expressed its concern over China’s increased air incursions. Meanwhile, Japan has stated that it is watching the situation closely and hoped that Taiwan and China could resolve their differences through dialogues. Its Foreign Minister Toshimitsu Motegi said that Japan believes that it is crucial for the situation surrounding Taiwan to be peaceful and stable (Lee and Blanchard, 2021). Over the weekend of October 3rd, the Japanese, U.S., British, Dutch, Canadian and New Zealand navies held joint drills near Okinawa, which included training with U.S. and U.K. aircraft carriers.

Inevitably, despite China viewing these actions as a necessary tactic in its toolkit for regional dominance and reunification with Taiwan, the space for miscommunication only increases and destabilizes the status quo across the strait.