The South American country with the smallest GDP is about to burst with oil. ExxonMobil found oil off Guyana's coast in 2015, and believes the reserves are between 4.4 billion to 6 billion barrels. Guyana is a state on the northern mainland of South America. It is, however, often considered part of the Caribbean region because..

The South American country with the smallest GDP is about to burst with oil.

ExxonMobil found oil off Guyana's coast in 2015 and believes the reserves are between 4.4 billion to 6 billion barrels.

Guyana is a state on the northern mainland of South America. It is, however, often considered part of the Caribbean region because of its strong cultural, historical, and political ties with other Anglo-Caribbean countries and the Caribbean Community (CARICOM).

The main industry of Guyana is agriculture and mining, and it enjoys a robust growth rate of 4.2%, one of the highest in the western hemisphere. For a country with a population of fewer than 800,000 and GDP slightly more than $6 billion, this recent discovery is life changing. Therefore, how Guyana prepares for the windfall from a newly discovered fossil fuel repository will have big ramifications for its future. 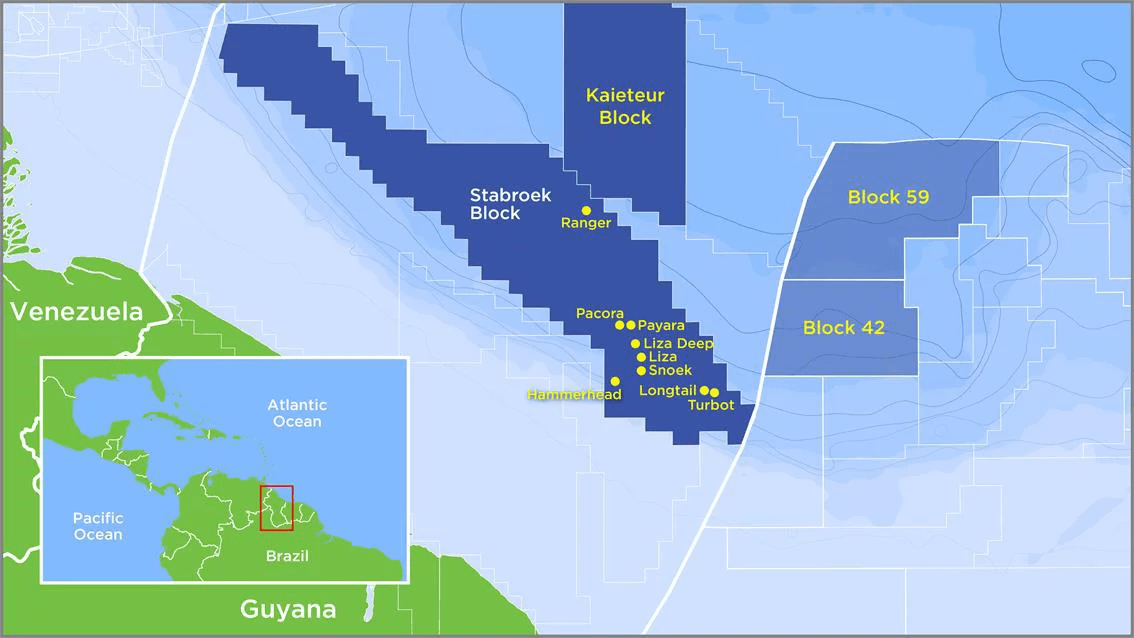 Guyana has struck black gold 120 miles off its large coast in the Starbroek block. ExxonMobil, the giant oil corporation discovered petroleum deposits in the off-shore block in 2015.

"There's a realistic chance of this transforming the economy," said Pavel Molchanov, senior vice president and equity research associate at Raymond James. "It's particularly impactful for a small country like Guyana." However, corruption, infrastructure and unexpected market forces could present challenges for Guyana, too. The democratic republic comprises two political parties made up of descendants of African slaves on one side and descendants of Indian indentured servants on the other. The fear is that the government in power could unfairly favour its ethnic constituents.

At the moment, the Afro-Guyanese party, the PNC, is running the government. But there's an election in 2020, which could decide who controls the purse strings.

Guyana should also be aware of "Dutch disease," a phenomenon in which existing industries are forgotten in favour of a new one. Guyana currently makes most of its revenue from exporting gold, bauxite, sugar and rice.

Some countries have handled windfalls well, and not spend everything at once. Notably, Norway set up an "oil fund" for investing surplus revenues to benefit future generations.

Most experts agree that Exxon's contract with Guyana is favourable toward the oil giant. The IMF recently advised the Guyanese government to revise the contract for future deals, stating that its tax laws are "well below what is observed internationally."

As the oil is tapped and more is found -- and the investment risks disappear – Guyana would probably tighten its future contracts. Additionally, Guyana could become world class hydrocarbon basis because of its geography and proximity to the sea.

For now, Guyana is doing everything right on paper in preparation. It's due to establishing a sovereign wealth fund this year, and has joined the EITI, an organization that helps countries "manage hydrocarbon reserves in a fiscally responsible manner."

But it's still too early to tell as the revenues will start to flow only in 2020.

Guyana’s main worry will be guarding against exploitation from foreign companies. Up to 40% of the Starbroek block, where the main deposits of oil were found, have been awarded to ExxonMobil. The remaining parts of the block are given to other smaller private American firms but there is no significant government presence in the extraction process. Coupled with Guyana’s relatively cheap labour, foreign MNCs could be able to exploit local workers, despite extensive labour regulations.

Additionally, Guyana’s oil reserves may be proven at 5 billion barrels, which is a small fraction compared to the major oil producers like Venezuela or Saudi Arabia or even Nigeria. Therefore, this oil discovery should not be treated as an unlimited cash cow but rather an injection of capital and cash into the Guyanese economy.

Our assessment is that Guyana should exercise caution as it reaps the benefit of an oil windfall. Countries like Venezuela and Equatorial Guinea offer examples from history, of badly managed oil reserves.  We believe that Guyana will heavily depend on private firms to operate any future offshore facilities as the country lacks extraction and processing equipment for crude oil. We also believe that ExxonMobil will continue to explore surrounding blocks and sectors in an attempt to establish a foothold in Guyana.