The GST Council announced that it will be keeping only 50 items, mostly demerit, sin and luxury goods in top 28 per cent tax bracket. Prime Minister Modi has been..

The GST Council announced that it will be keeping only 50 items, mostly demerit, sin and luxury goods in top 28 per cent tax bracket.

Prime Minister Modi has been campaigning for GST since 2014. Goods and Service Tax is a value added tax, which is multi-stage and destination-based taxation on each stage of good and service production as well as generation. It is part of his economic agenda to reform India. Earlier this year, PM Modi adopted a radical economic agenda in the form of demonetization which met with numerous criticisms and whose success is yet to be determined. Experts believe that the new tax code would face similar criticisms and would result in chaos in the country.

The GST is governed by a GST Council and its Chairman is the Finance Minister of India. Under GST, goods and services are taxed at the following rates, 0%, 5%, 12% ,18% and 28%. There is a special rate of 0.25% on rough precious and semi-precious stones and 3% on gold. In addition, a cess of 22% or other rates on top of 28% GST applies on few items like aerated drinks, luxury cars and tobacco products. GST replaced a slew of indirect taxes with a unified tax and is therefore set to dramatically reshape the country's 2 trillion dollar economy.

There have been both positive as well as negative reactions towards the introduction of GST. Economists believe that it could boost output up to 2% if executed and administered well. On the other hand, All India Manufacturers’ Organisation claims that GST should be handled carefully and meticulously and there ought to be systems in place to address problems that may arise. The industrial group raised its concerns over the government rushing in the implementation of what is a long-term tax reform. 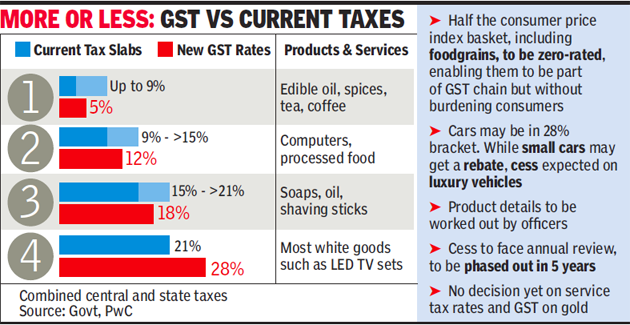 In 2017, the growth of the Indian economy has considerably slowed down. Between the months of April and June, it grew by 5.7%, which is a three year low. Experts believe that economic slowdown was caused by demonetization as well as the rollout of GST.

The Indian government has been introducing new programs to boost the economy. In October 2017, Indian government announced a capital infusion plan of $32.43 billion into public sector banks over the next two years.

The GST Council announced that it will be keeping only 50 items, mostly demerit, sin and luxury goods in top 28 per cent tax bracket. "Lower 18 per cent GST will be levied on chewing gums, chocolates, after shave, deodorant, washing power, detergent, marble," Bihar Deputy Chief Minister Sushil Modi said. He added, “There were 227 items in the 28 per cent slab. The fitment committee had recommended that it should be pruned to 62 items. But the GST Council has further pruned 12 more items. We’ve limited the number of items in the 28 percent tax list to 50 items. He said that this move could cost the exchequer around 200 billion rupees ($3.07 billion) this fiscal year.

Modi called it a “historic” decision and added, “There was unanimity that in 28 per cent category there should be only sin and demerit goods. So, today the GST Council took a historic decision, that in the 28 per cent slab there will be only 50 items and the remaining items have been brought down to 18 per cent.”

The latest announcement was widely expected as Finance Minister Arun Jaitley had hinted towards this a week ago. At the time he said, “We have been gradually bringing them down. The whole idea is, as your revenue collections neutralize we must prune it and that is the pattern in which the Council has so far been functioning. I see that as a future guide as far as the Council is concerned.”

The GST Council has readjusted rates for many items since the implementation the new tax regime and further changes are anticipated. When the GST was introduced, there were 200 items in the bracket. Top BJP leader Shyama Charan Gupta has said that demonetization has crippled the unorganized sector. He is also the founder of Shyama Group of companies in 1973, which is involved in Bidi manufacturing (an industry heavily dependent on unorganized sector).

Our assessment is that the growing criticism against GST prompted the government to declare the latest announcement. Critics have spoken about the economic disruption caused by the tax roll-out. This move is likely to ease the burden on small businesses in the country. We feel the government is sensitive to comments made by senior leaders in the party who operate MSME businesses.