The most important transformation of recent decades has been the declining fortunes of the high-income countries in global economic activity. Affluent countries of the 19th and early 20th centuries have gone into rapid retrogression.

The most important transformation of recent decades has been the declining fortunes of the high-income countries in global economic activity. Affluent countries of the 19th and early 20th centuries have gone into rapid retrogression. The paradigm shift in wealth and power has happened with the rise of Asia and importantly of China.

The US is the prime driver of the global technology, since the advent of the 19th century. US productivity grew rapidly between 1920 and 1970. The economy again had transient growth between 1994 and 2014, which was the era of the internet.

One of the major indicators of China’s advance is its huge domestic saving. Chinese capital market and financial institutions have become influential in the world economy today.  It is likely to occupy the position the US had in the 20th century. 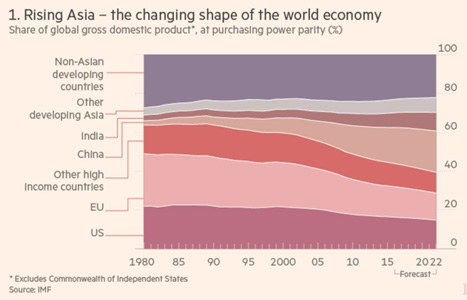 By 2022, the share of Asian emerging and developing countries in world output is forecast to be the same as that of the high-income countries.

The rise of China is the principal reason for this dramatic shift in relative economic power, though India’s rise is also significant. China’s share in world output is expected to jump from 4 % in 1990 to 21 % in 2022. In the intervening period India’s share is predicted to rise from 4 % to 10 %.

Technology: The collapse in the price of semiconductors is the driving force behind the revolution in communications and data processing. The relative price of information processing, has declined by almost 96 % since 1970.

Productivity: Economist Robert Gordon has revealed that the productivity index of US enterprises in the period between 1920 and 1970 has not been improved since then.

Globalisation: The rapid growth of both trade and financial assets and liabilities, relative to global output, halted after the financial crisis. Protectionism may be part of the reason for this, but it does not seem to be the dominant factor.

Income: About two-thirds of the population of 25 high-income countries suffered a drop real income from wages and capital between 2005 and 2014. This study was conducted by the McKinsey Global Institute in the period of 2005- 2014 and released in July 2016.

Our assessment is that, with globalisation, skills rather than resource base of countries determine their competitiveness. Skilled workers gain at the expense of unskilled ones. As emerging countries acquired these skills, they too were able to provide a more skilled work force. The emergence of Japan, Taiwan, Korea, Malaysia, Singapore, China and now Vietnam, all Asian countries, in the last four decades, as leading manufacturers and exporters of high technology products, demonstrates how these countries were able to imbibe western technology and successfully compete in global markets. A paradigm shift might now appear with the introduction of robotics and artificial intelligence in the market place.