The Golden Age of Hydrogen?

The Vernian vision of a hydrogen economy may soon come to pass as countries adopt strategies to mitigate climate change and democratise energy sources.

As climate pressures incentivise governments to formulate ‘net-zero’ strategies, hydrogen has been touted as a clean alternative to fossil fuels. Most recently, the United Kingdom has unveiled plans to develop a hydrogen economy, pledging to attain 5GW of low carbon hydrogen production capacity by 2030. Other countries like Germany, Japan, Australia and China are also contemplating the utility of hydrogen in driving decarbonisation agendas.

Although hydrogen was first identified as a distinct element in 1776, its potential use as a fuel was recognised much later on. During the nineteenth century, the possibility of an energy economy based on hydrogen had occurred to several visionary thinkers, including the popular English author Jules Verne. As can be recalled, in 1874, he had prophetically hypothesised about a hydrogen economy in his work of fic­tion entitled ‘The Mysterious Island’.

The term ‘hydrogen economy’, however, was officially coined only a century later by electrochemist John O’Mara Bockris when he delivered a speech at the General Motors (GM) Technical Center in Michigan. Building on this, the University of Michigan had proposed a hydrogen economy to solve some of the adverse effects emanating from hydrocarbon resources.

With the 1973 OPEC oil embargo and the concomitant supply shocks, the world became aware of the need to pursue alternative fuels. This was bolstered by growing scientific evidence about human-induced global warming, which drew attention to the use of hydrogen as a veritable energy source. 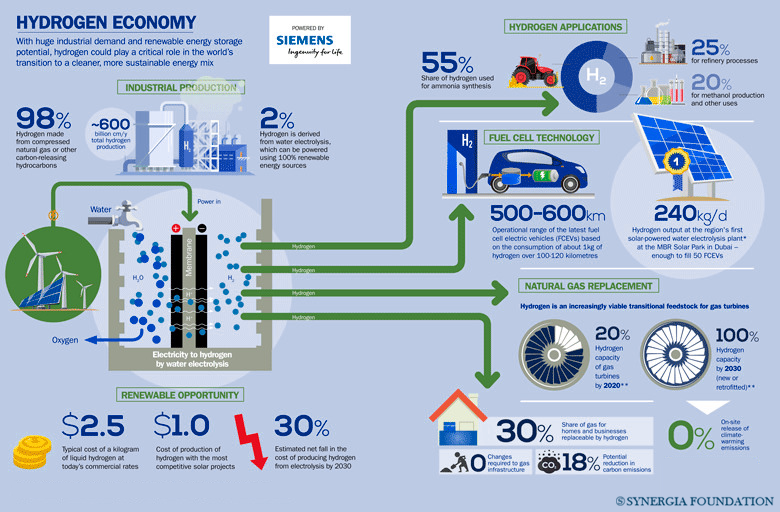 Apart from being the most abundant element in the universe, hydrogen is a good energy carrier. When combined with oxygen in a fuel cell, it releases energy like electricity or heat. The only by-product is water, making it a highly attractive and clean source of energy for net-zero economies.

As per the most optimistic estimates, hydrogen can be effectively employed to make fertiliser, heat houses, balance power grids, fuel vehicles and drive heavy industries like steel and cement. Given that it can be stored, liquified and transported through pipelines, countries need not invest in new and expensive infrastructure. Existing gas pipelines can be leveraged to transmit and distribute hydrogen fuel.

However, to drive these applications, hydrogen will be required in staggering quantities. Since it rarely occurs in a natural state, the element will have to be artificially manufactured. This can be done either by steam-methane reforming or by using electrolysis to split the hydrogen and oxygen molecules in water. In this context, it is important to recognise that the hydrogen economy will be clean as long as the methods used to produce this energy source are clean.

Currently, there are three kinds of hydrogen worth considering - grey, blue and green hydrogen. ‘Grey hydrogen’ refers to the vast majority of hydrogen that is already in use. Made from natural gas, it emits carbon dioxide during the manufacturing process, making it as polluting as fossil fuels. No carbon capture technologies are used to mitigate these emissions. Despite being a carbon-intensive process, grey hydrogen remains the most widespread production route, as low-carbon technologies are not necessarily cost-competitive.

As far as ‘blue hydrogen’ is concerned, it refers to the energy source made from natural gas, but with carbon capture and storage (CCS) technologies. The process of steam reformation is employed, whereby natural gas is mixed with steam and heated until the mist resolves into carbon dioxide and hydrogen. The carbon by-product is then captured and sequestered away through CCS.

Finally, ‘green hydrogen’ is derived from the electrolysis of water, which itself is powered by renewable sources of energy. Given that there are zero carbon emissions, many environmentalists consider this to be the ideal medium for transitioning to a net-zero economy.

However, cost considerations have driven many stakeholders to argue that both blue and green hydrogen should be part of the energy mix. According to them, blue hydrogen sources can play an interim role in the net-zero economy, as long as they are accompanied by appropriate climate safeguards. Since they are available more immediately, oil and gas majors can use existing fossil fuel infrastructure to produce such hydrogen. Once they bring down prices through economies of scale and green hydrogen becomes simultaneously cheaper, companies can completely transition to the latter energy source.

Many climate scientists and researchers have pushed back against the use of blue hydrogen on the grounds that it can 'lock' nations into a future of methane leakages. In their view, burning blue hydrogen for heating can possibly result in higher emissions of greenhouse gases when compared to grey hydrogen. This is because the process of carbon capture will entail increased use of natural gas, which will result in "higher fugitive methane emissions”. Moreover, CCS technologies have not reached their full potential. Even now, they can cut CO2 emissions only by 80-90%. Unless a 100 per cent capture rate is attained, blue hydrogen can hardly be deemed a 'zero-carbon' alternative.