Automaker Geely’s shares increased up to 8.8 percent after the purchase of a $9 billion stake in Mercedes maker Daimler. This rekindled fear in Germany on Monday of its..

Automaker Geely’s shares increased up to 8.8 percent after the purchase of a $9 billion stake in Mercedes maker Daimler. This rekindled fear in Germany on Monday of its highly-prized expertise falling into Chinese hands. 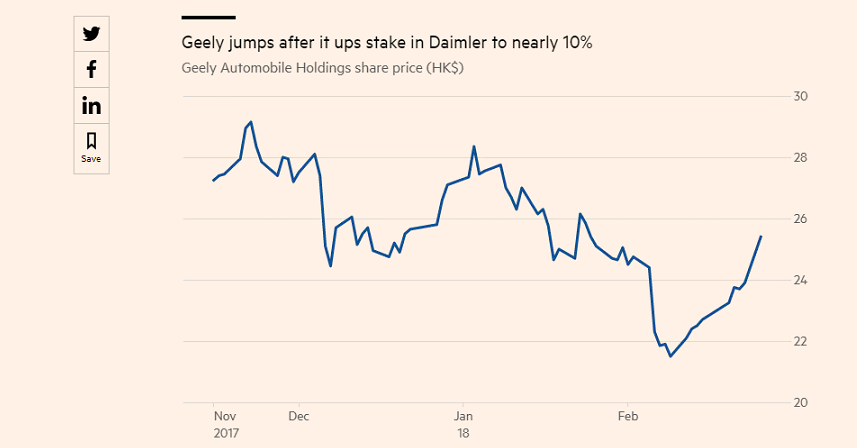 Zhejiang Geely Holding Group Co., Ltd is a Chinese multinational automotive manufacturing company headquartered in Hangzhou, Zhejiang. Geely has been the most aggressive of the Chinese OEMs in expanding internationally.  Geely bought Volvo Cars from Ford in 2010 and recently acquired an 8.2% stake in non-affiliated truck maker AB Volvo, as well.  Geely also owns 49.9% of Malaysia's Proton and 51% of luxury marque Lotus, which had been controlled by PROTON since 1996.

Daimler AG is a German multinational automotive corporation. It is headquartered in Stuttgart, Baden-Württemberg, Germany. As of 2014, Daimler owns shares in several car, bus, truck and motorcycle brands including Mercedes-Benz, Mercedes-AMG, Smart Automobile, Detroit Diesel, etc. Daimler is considered among the furthest ahead in the automotive industry in developing pure electric technology, with ambitious plans to release 10 different fully electric vehicles by 2022 and invest more than €10 billion into the technology.

Daimler currently has a joint venture with BYD in China to build electric cars.

On Friday, Zhejiang Geely Holding Group chairman Li Shufu said, “I am particularly pleased to accompany Daimler on its way to becoming the world’s leading electro-mobility provider.” He further stated, “No current car industry player is likely to win this battle against the invaders from outside without friends. To achieve and assert technological leadership, one has to adapt a new way of thinking in terms of sharing and combining strength. My investment in Daimler reflects this vision.” Geely said on Saturday it would not buy any further shares in Daimler “for the time being”.

The German government warned that, “the deal should not be used as a “gateway” for Chinese industrial policy interests.”

Geely, which has bought a 9.7% stake, says it “ hopes to co-operate with the German car giant on electric cars.” Geely's $9bn (£6.4bn) investment has raised some concerns that the Chinese firm will seek access to technology and innovation in exchange for the deal, as reported by BBC.

The German government said it would not block the investment, but Economy Minister Brigitte Zypries said it must "keep an especially watchful eye". Germany is "an open economy that welcomes investments, as long as they happen in line with the market", she told the German newspaper Handelsblatt.

She further stated, “Nevertheless, Germany's openness should not be used as a gateway for other states' industrial policy interests." “I have no objections to the fact that China wants to trade ... and to invest," said Chancellor Angela Merkel.

Last week Daimler also announced a $1.9bn investment into a partnership with another Chinese auto firm, BAIC. “The money will go into modernising a BAIC plant to build Mercedes cars including electric vehicles” the two companies said. Daimler and BAIC are already co-operating in the Chinese market, where foreign production is often only permitted through partnerships with Chinese firms.

Last week, German carmaker BMW announced a deal with Chinese manufacturer “Great Wall Motor” to build electric-powered Mini cars in China for the local market. The Chinese government has said 20% of cars sold by 2025 should be electric or rechargeable-hybrid vehicles - a target that is spurring many global carmakers to raise their investment in China. Forbes, a global media company reported, “Geely has exposure to the world's largest car market but will never have the cachet and engineering prowess of the Mercedes brand or the and 130-year history of Daimler.”

“The events of last Friday are the latest demonstrations of China’s growing confidence and assertiveness, growing desire to impose its will on global affairs, and growing willingness to exploit the German OEMs’ heavy reliance on Chinese profits,” Bernstein Research said.

Our assessment is that Chinese firms could gain much influence in European economies via foreign investments since the European Union is more open to investments from abroad than what Beijing would normally allow in its territory. We believe that the Germans are aware of the strategic nature of such investments.