The genesis of a conflict

As fears about a full-blown trade war continue to grow, China has announced that it will be levying an additional 25% tariff on imports of 106 U.S. products. It has been speculated that the previous list of tariffs imposed by United States Analysts are intended to target Beijing’s “Made in China 2025” policy.

US President Donald Trump’s announcement of tariffs on US$60 billion worth of Chinese imports has raised the prospect of a trade war, which is expected to threaten the global economy. The upcoming trade sanctions have triggered retaliation from China’s foreign ministry, which said that Beijing would “take all legal measures to protect our interest.” In retaliation, China unveiled tariffs on $3 billion of US imports. Fears continue to grow, of a trade war between the two countries that could ultimately affect the global economy. The day China unveiled its tariffs, Asian shares declined.

Meanwhile, the US has already launched a formal complaint against China at the WTO. Its statement said: “China appears to be breaking WTO rules by denying foreign patent holders, including US companies, basic patent rights to stop a Chinese entity from using the technology after a licensing contract ends. China also appears to be breaking WTO rules by imposing mandatory adverse contract terms that discriminate against and are less favorable for imported foreign technology.” 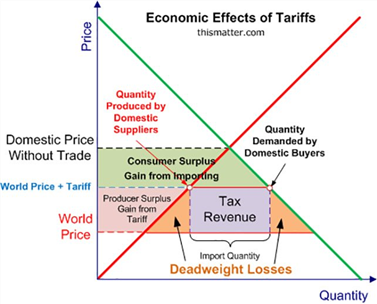 “This level is appropriate both in light of the estimated harm to the US economy, and to obtain elimination of China’s harmful acts, policies, and practices,” the US trade representative’s (USTR) office said in a report on Tuesday.

China’s ministry of commerce has criticized the US administration noting, “China plans to immediately bring relevant US practice to the dispute settlement body of the WTO (World Trade Organisation), and is ready to take counter measures on US products with the same intensity and scale - that will be published in the coming days.”

China has announced that it will be levying an additional 25% tariff on imports of 106 U.S. products. This includes soybeans, automobiles, chemicals and aircraft, in response to proposed American duties on its high-tech goods. "China’s response was tougher than what the market was expecting -- investors didn’t foresee the country levying additional tariffs on sensitive and important products such as soybeans and airplanes," said Gao Qi, Singapore-based strategist at Scotiabank. "Investors believe a trade war will hurt both countries and their economies eventually."

"The U.S. list suggests that the government is targeting the ’Made in China 2025’ initiative, while China’s retaliation intends to bring Americans back to the negotiation table," said Zhou Hao, an economist at Commerzbank AG in Singapore. said in an e-mail.

John Kemp, energy analyst and public policy specialist said that trade wars are hard to stop once the escalation begins. He tweeted, “Trade wars are easy to start but hard to stop. Like the First World War, once the GO code is given and the trains start moving they are hard to stop. Who is going to help the United States and China come up with a face-saving solution? Most analysts and investors still assume a last-minute deal can avert tariffs actually being imposed. Maybe. But by then damage may already have been done. And neither Trump nor Xi can afford to appear to back down and look weak in front of a domestic audience.”

“If history is any indication, these proposed tariffs will not work and will be entirely counterproductive,” said Dean Garfield, chief executive officer of the Information Technology Industry Council. “Tariffs penalize US consumers by increasing prices on technology products and will not change China’s behaviour.”

Our assessment is that history has shown time and again that trade wars can sometimes directly play a role in escalating armed conflict. It was the Smoot-Hawley Act of 1930 that acted as a precursor to World War II. Some experts claim that the Tariff of Abominations of 1828 was one of the key reasons for why the US Civil War began. As China and the US continue to unveil more aggressive tariffs, the nations will find it harder to find a compromise. What will this lead to?