American aerospace manufacturer SpaceX, known for its success in private ventures into space travel, has already conducted two launches in 2018, to varying degrees..

American aerospace manufacturer SpaceX, known for its success in private ventures into space travel, has already conducted two launches in 2018, to varying degrees of success. The first of these launches was the highly secretive and reportedly unsuccessful “Zuma” satellite in January. The second was the high-publicity Falcon Heavy launched on the 6th of February, which has seen largely positive results despite some miscalculations.

Meanwhile, Musk’s pet project “Starman”, the dummy payload carried by Falcon Heavy, has come under critique for its frivolity.

Elon Musk is a South African-born Canadian American business magnate, investor and inventor. He is listed by Forbes as the 53rdrichest person in the world. As of January 2018, he his  net worth is $20.9 billion. Best known as the Founder, CEO and CTO of SpaceX, a private aerospace manufacturing and space transport services company, Musk is known for his aspiration to enable the colonisation of Mars, and reduce costs of space travel within the next two decades.

SpaceX was the first privately funded company to successfully launch, orbit, and recover a spacecraft. It was certified for military launches in 2015. The company currently flies missions to the International Space Station under a cargo resupply contract with NASA. In 2017 alone, SpaceX launched 18 crafts.

Zuma is a high-secrecy satellite commissioned by the US government. It was launched by SpaceX on its Falcon 9 rocket in January 2018. Zuma was reportedly built by American global aerospace and defence technology company Northrop Grumman.

Falcon Heavy, SpaceX’s latest mission, was launched from the Kennedy Space Centre on the 6th of February. Falcon Heavy is a reusable super heavy-lift launch vehicle. At $90 million per launch, it is capable of carrying double the capacity of the second most powerful rocket in the world, at one third the cost. The livestream of the launch event was watched by 2.3 million live viewers.

The rocket’s test payload was Musk’s old red Tesla roadster, with a mannequin nicknamed “Starman” in the driver’s seat. On the car’s radio system, Bowie’s “Space Oddity” plays on repeat, on its circuit board is printed the phrase, “made on earth by humans”. The car was meant to be launched into orbit near Mars. Musk’s four-hour livestream from a camera strapped into the car, titled “Live Views of Starman” has over 10 million views on Youtube.

The Zuma mission has reportedly been unsuccessful. The satellite meant to dock in orbit may have crashed into the sea due to a malfunction, according to Bloomberg. After the launch, US Strategic Command stated that it was unable to track the satellite. SpaceX, in a review, claimed that “no design, operational or other changes are needed,” to the rocket used, leading to speculation that the fault may have been the satellite’s failure to separate from the rocket properly.

Thus far, the Falcon Heavy has seen more success. The rocket’s side boosters detached and landed safely soon after the Falcon reached the upper layers of the Earth’s atmosphere, however the middle booster missed its mark to crash into the Atlantic.

Whether the Falcon’s mission is entirely on course as intended, however, is uncertain. Musk’s quirky payload, “Starman” may travel beyond Mars into the asteroid belt between Mars and Jupiter. On the 7th of February, Musk tweeted: “Third burn successful. Exceeded Mars orbit and kept going to the Asteroid Belt.” Besides the possibility of collisions with celestial objects, scientists have warned that radiation found in that area of space may degrade the car into mere debris before it even reaches its intended orbit. 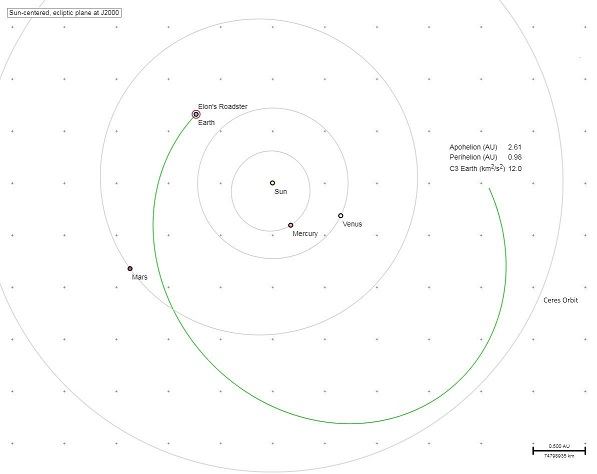 Despite the popularity and attention this project has received, critics have called it childlike and whimsical, a colossal waste of resources. Commentators have questioned the frivolity of sending a car into space, given very real crises in other parts of the world. Nathan Robinson, in the Washington Post deems it an “indefensible waste of resources”. He refers to the Syrian crisis, whereas the rocket was being launched into the atmosphere, 80 people on the outskirts of Damascus were killed by government airstrikes.

Robinson believes that this project is representative of the enormous wealth gap that exists in the world today. “There is, perhaps, no better way to appreciate the tragedy of 21st century global inequality than by watching a billionaire spend $90m launching a $100,000 car into the far reaches of the solar system,” Robinson writes.

Our assessment is that the debate surrounding the ethics of investing billions in space travel has two facets. One, is it a rich man’s fantasy and need to invest such large amounts of money into the future when more than 50% of the population in the present find it hard to live? We believe that this money could have been used to find solutions to threats that affect the very existence of mankind. Having said this, we also do not want to discard the benefits of scientific progress. As stated earlier, the development of global aerospace capabilities will help us continue to expand our knowledge of the known universe.