The future of net neutrality

America’s Federal Communications Commission is scheduled to vote on a controversial plan to repeal net neutrality protections that were put in place by former President Barack Obama.

The action has sparked another international debate over the veracity of net neutrality.

Net neutrality is a term that was coined by Columbia University media law professor Tim Wu in 2003. It is the principle that Internet service providers must treat all data on the Internet the same, and not discriminate or charge differently based on user, content, website, platform, application, type of attached equipment, or method of communication. If there is no net neutrality, then providers can choose to make certain sites and content faster to load than others. It can charge money to access specific websites. It will have unlimited control over the content viewed and perused by millions across the world on the internet.

The Federal Communications Commission (FCC) is an independent agency of the United States government that regulates interstate communications by radio, television, wire, satellite, and cable. The FCC works towards six goals in the areas of broadband, competition, the spectrum, the media, public safety and homeland security. It is also committed to modernizing itself and these sectors. The current White House administration is trying to initiate a roll back of the net neutrality rules enshrined in law under President Barack Obama.

At the core of this debate is Title II of the Communications Act of 1934. Title II is the legal foundation on which the FCC enacted the Open Internet Order of 2015, which established rules for internet service providers (ISPs) regarding net neutrality. Title II of the Communications Act was used to provide the legal basis for the FCC to enforce net neutrality rules two years ago. 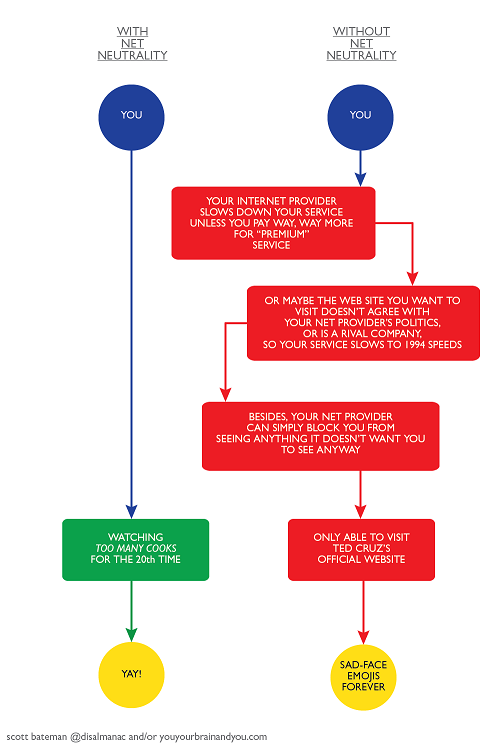 In December 2017, the Federal Communications Commission is scheduled to vote to repeal the net neutrality laws that were imposed during the tenure of former US President Barack Obama. The action has sparked another international debate over the veracity of net neutrality. The FCC is currently led by the Republican majority. The FCC’s chairman, Ajit Pai has strongly rallied against net neutrality.

More than 20 internet luminaries including the inventor of the World Wide Web, Tim Berners Lee, have written an open letter opposing the vote. “The FCC’s rushed and technically incorrect proposed order to repeal net neutrality protections without any replacement is an imminent threat to the internet we worked so hard to create. It should be stopped. It is important to understand that the FCC’s proposed order is based on a flawed and factually inaccurate understanding of Internet technology,” read the open letter which was addressed to lawmakers with oversight of the Federal Communications Commission. Pai himself has fielded much of the criticism as he has been called biased by protestors. Some have alleged that as a former employee of Verizon (internet provider), he has his own agenda.

Net neutrality campaigners say losing net neutrality will mean internet service providers will be free to trample all over the open web, slowing down services they don't like, and speeding up ones they do. The Center for Responsive Politics has revealed that players in the telecoms industry have spent $101m (£75.2m) in wooing the 535 members of Congress for a variety of reasons, not just net neutrality.

Pai's plan has been praised by the telecom industry, which argues the earlier regulation was a drag on broadband investment and innovation. Recently, India’s telecom regulatory body TRAI, published a fresh set of recommendations strongly backing net neutrality. With these new regulations, India could quite possibly introduce the world's most progressive policy on equal internet access for all.

Our assessment is that the internet was developed as a fair and unbiased platform for people to access information. Governments should work to preserve that space. We believe that net neutrality is important so that ISPs cannot legally give preferential treatment to services they directly profit from and block those they don’t. It is reasonable to expect that without an open internet governments and companies friendly with these governments are able to do anything from simply blocking or banning apps entirely (example Facebook, Twitter) to more aggressive moves such as the effective shut down of internet service providers.