Freezing out the Games

The International Olympic Committee (IOC) has tried over the past 40 years to keep politics and sports as separate as possible in the spirit of ‘Olympic cooperation’ but has failed occasionally over big power politics. This was most recently seen in the case of the 2022 Winter Olympics in Beijing, where Western powers from the US to the UK announced a diplomatic boycott of the opening ceremony.

Political tensions and diplomatic standoffs are, of course, not new to the Olympics, and boycotts have become a showcase for geopolitical rivalry. Who can forget the 1936 Berlin games, which were used by Hitler to showcase his theory of Aryan supremacy?

The most prominent boycott was in the 1980 Moscow Olympics when the U.S., China, a clutch of Islamic nations and many European countries boycotted the summer games in protest against the invasion of Afghanistan by the USSR. The Soviet Union, along with its Warsaw pact allies, retaliated by staying away from the next edition of the summer Olympics held at Los Angeles. Of course, during its apartheid era, South Africa had remained a global sports pariah till the dissolution of the white regime.

The upcoming Beijing winter games in February 2022 have been the subject of much debate and discussion. Calls for a boycott began many months before the Games when officials in many participating capitals, principally the U.S. raised the issue of human rights abuses in China, including atrocities against Uyghur and other ethnic minorities in Xinjiang and the crackdown on the pro-democracy movement in Hong Kong. Protests gained fresh impetus when Chinese tennis player Peng Shuai disappeared from public view after she raised sexual assault allegations against a former top official of the Chinese Communist Party. 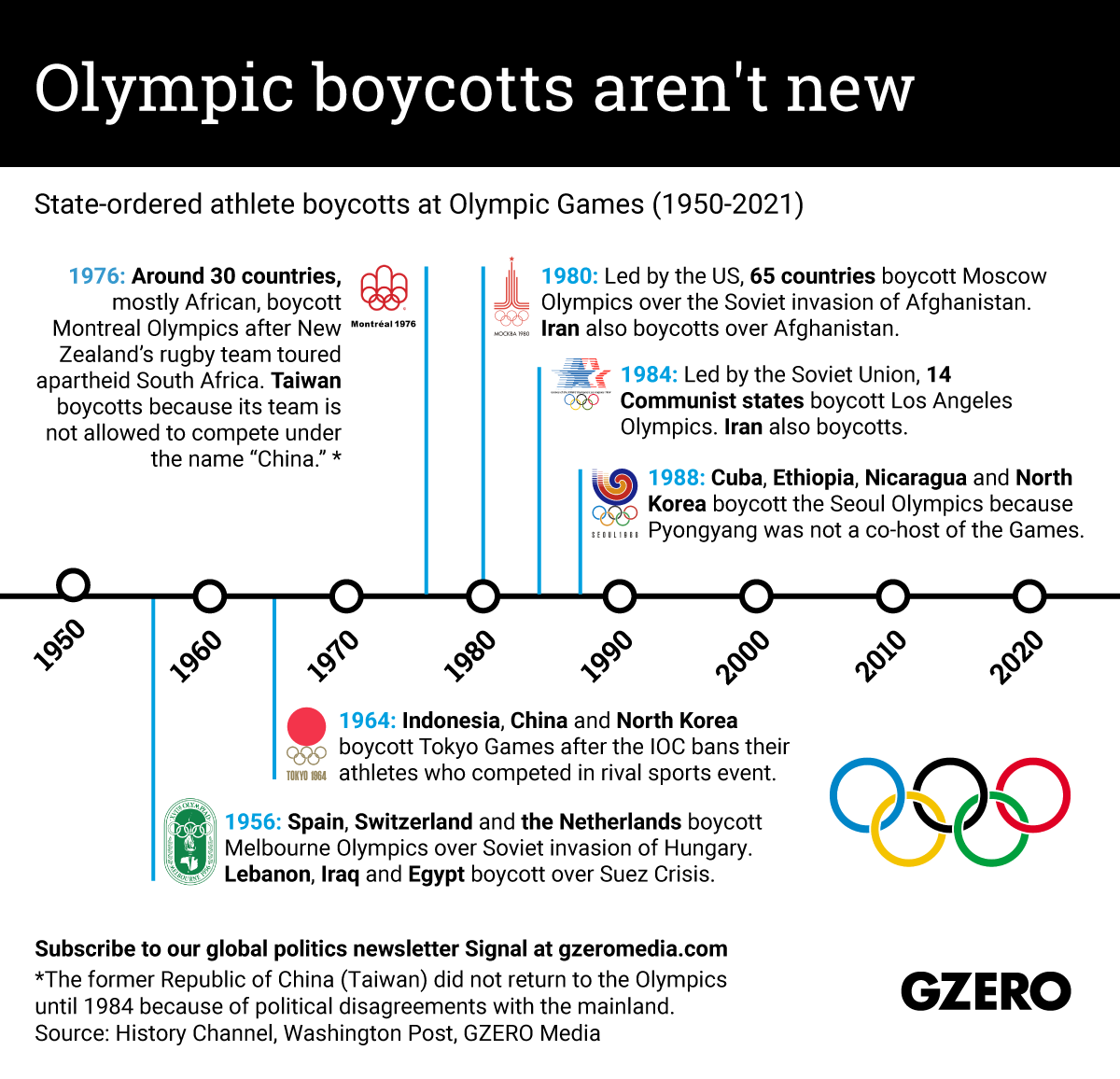 A cluster of countries has indicated their intention to boycott the games entirely or send only athletes to participate for the sake of sports. China called the American call for a ‘diplomatic boycott’ a ‘plot’ to disrupt the Olympics and called it against the spirit of the Olympic Games. It warned that it could harm the ongoing two-way dialogue to reduce tensions between the two great powers.

The diplomatic boycott of the Beijing Winter Olympics, of course, does not meet the scale or severity of the Cold War-era boycotts. In any case, in the current scenarios of the pandemic and COVID-19 protocols, including mandatory quarantine, far fewer dignitaries were likely to attend anyway.

The international community, including allies and partners of the United States, stand divided over the Biden administration's decision to diplomatically boycott the games. It seeks to allow athletes to compete while protesting China's human rights abuses. So far, it has gained the support of key U.S. allies such as Australia, United Kingdom and Canada. Japan has also decided to skip sending diplomats to the Games, while New Zealand maintains a ‘non-involvement’ position due to the COVID-19 pandemic.

At the other end are countries such as France who chose to send diplomats in a bid to draw a sharp line between sports and politics and concerns over human rights. South Korea is not participating in the boycott, citing its coordination with China over North Korea. The European Union is yet to make a final decision with member nations at opposing ends of the debate. Norway has planned to send both its diplomats and athletes to the Beijing Games.

Such boycotts have little effect other than focussing the media glare on certain geopolitical issues. Going by past precedents, the Soviet occupation of Afghanistan was hardly impacted by the boycott of the 1980 Moscow Olympics, and the Chinese are unlikely to make any meaningful changes to their alleged policies in Xinjiang. At the most, the so-called 'diplomatic dialogue' is just a message to China to address some global concerns about her internal law and order policies.

Any boycott of such high-level games has its human side; hundreds of athletes toil over years to reach Olympic standards and may have just one chance in their lifetime to make their mark in their chosen sport. It is grossly unfair to them if politics come in the path of their lifelong dream. In the end, only athletes suffer, as was seen both in 1980 and 1984, with the politician remaining unruffled by the boycott.

As regards boosting sports diplomacy for improving the geopolitical environment, there are many detractors. A sportsperson is forbidden from making political moves during the games under the IOC's stringent rules, which prohibit political protest or demonstration at official ceremonies or in the arena.

The IOC, on its part, has tried to stay out of the controversy. It allocates the games to countries not on political considerations but purely on the ability to stage such a mega event and a track record for excellence in the sporting field. Critics do not concur with the IOC's 'neutral' stand and call out its efforts to organise the talks between North and South Korea before the 2018 Seoul Winter Olympics, which ended successfully in the participation of the North Korean team. This was then hailed as a demonstration of the power and influence of sport to bring about a greater good.