A recent report published by environmental groups has revealed that funding for “extreme” fossil fuels increased by 11% in 2017. This increase took place largely in US..

A recent report published by environmental groups has revealed that funding for “extreme” fossil fuels increased by 11% in 2017.  This increase took place largely in US and Canada, however, banks across the world fund environmentally destructive fossil fuel projects.

Climate change is a change in the statistical distribution of weather patterns when that change lasts for an extended period of time. Global warming is the observed century-scale rise in the average temperature of the Earth's climate system and its related effects. Multiple studies published in peer-reviewed scientific journals show that 97 percent or more of actively publishing climate scientists agree that climate-warming trends over the past century are extremely likely due to human activities. In addition, most leading scientific organizations worldwide have issued public statements endorsing this position.

The Paris Agreement is an agreement within the United Nations Framework Convention on Climate Change (UNFCCC) dealing with greenhouse gas emissions mitigation, adaptation and finance starting in the year 2020. As of October 2017, 195 UNFCCC members have signed the agreement. However, last year, the United States withdrew from the deal. Since election, President Donald Trump has been sceptical about the threat posed by climate change. He has repealed US environment protection orders including the Clean Power Plan.

The combustion of fossil fuels contributes greatly to air pollution. Scientists have also drawn correlation between the widespread use of fossil fuels (beginning with the industrial revolution) and increasing global temperatures. Due to depleting reserves of petroleum, fossil fuel industries have begun moving towards “increasingly [environmentally] dirty and dangerous” means of extracting these resources. These sources of fossil fuel have been labelled “extreme” fossil fuels.

“Extreme” fossil fuels include oil obtained from the Arctic, fuels obtained from ultra-deepwater drilling, fracking, and coal mining. Tar sands or oil sands include low-quality oil obtained through strip mining in Canada and Venezuela. According to environmental NGOs such as Price of Oil, tar sands is one of the most environmentally damaging sources of fuel. Extraction of tar sands is energy and water intensive, and highly polluting. 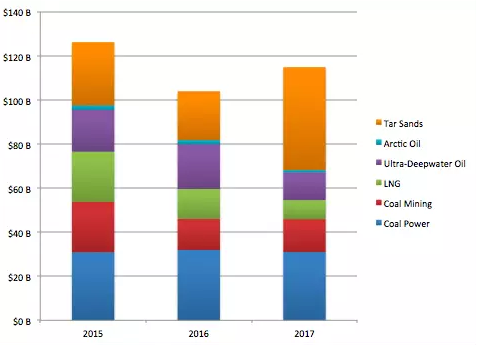 A new report titled “Banking on Climate Change”, has revealed that investments in the most harmful types of fossil fuels have increased since President Donald Trump took office. The report includes a “report card” that grades banks based on their funding to fossil fuel projects. The report looks at 36 banks across US, Canada, Europe, China, Japan, and Australia.

Financing for fossil fuel dropped from $126 billion in 2015, to $104 billion in 2016. However, it increased by 11% last year, to $115 billion. This rise came primarily from American and Canadian banks. Tar sands was the primary cause for this increase.

“The single biggest driver of the overall increase in extreme fossil fuel financing came from the tar sands sector, where financing grew by 111 percent from 2016 to 2017,” the report stated. Funds in tar sand doubled to $98 billion, primarily due to investments from Royal Bank of Canada, Toronto Dominion Bank, and JPMorgan Chase.

“At a time when some European banks like BNP Paribas and ING are adopting policies that sharply restrict their lending to some of the worst fossil fuels, US and Canadian banks like JPMorgan Chase and TD are moving backwards in lockstep with their wrongheaded political leaders,” RAN spokeswoman, Alison Kirsch said. Kirsch emphasised the need to “phase-out” these fuels. “Banks need to be accountable and implement policies guarding against extreme fossil fuel funding.”

HDFC performed the worst of all European banks, while all Chinese banks in question received “F” grades.

The report emphasises that the Paris agreement requires consolidated efforts by governmental and non-governmental players. The report notes, “No bank has yet truly aligned its business plan with the Paris Climate Agreement, whose temperature goals require banks to cease financing expansion of the fossil fuel sector.” “The lack of comprehensive policies from all banks on extreme fossil fuels means that last year’s increase in financing could continue and even accelerate in the years to come,” it warns.

Environmental responsibility has become a point of consumer concern. JPMorgan has attempted to “block a shareholder resolution calling for a bank report on financial and climate risks associated with tar sands projects,” according to the Guardian. Some have pointed out that climate change could lead to surges in insurance claims, which could in turn, damage the banks’ long-term interests.

Our assessment is that this report is indicative of a worrying trend, which may reverse the progress made by the Paris Agreement. Global corporations such as banks must be held accountable for the role they play in dealing with greenhouse gas emissions. We believe that it is essential for the world to move towards cleaner energy in order to limit the damage caused by climate change.