Eight former Catalan ministers who had been removed by the main government have been remanded in custody by a Spanish high court judge over the region's push for..

Eight former Catalan ministers who had been removed by the main government have been remanded in custody by a Spanish high court judge over the region's push for independence.

Catalonia has been settled by the Phoenicians, the Etruscans and the Greeks. In 13th century, the institutions of Catalan self-administration were formed. This was done under the banner of Generalitat de Catalunya. Even though unification process took place under the leadership of the Crown of Aragon in 1476, Argon allowed Catalonia to retain its autonomy. Between 1640 and 1659, there was a revolt within Catalonia for secession. Parts of the region that ceded are now part of France.

The political movement for a separate state of Catalonia can be traced back to early 20th century. The 122nd President of Catalonia, Francesc Macià, founded the independentist party Estat Català. He is considered one of the most crucial figures in the rising nationalist movement in Catalonia at the time. In 1931, after winning the elections, Macia declared the independent state of Catalonia. After negotiations with Spain, he accepted autonomy rather than complete independence. This autonomy was abolished during the Spanish Civil War, General Francisco Franco abolished that autonomy. It is currently designated as a nationality by its Statute of Autonomy. Today, Catalonia is one of the most prosperous regions in Spain. It’s biggest city, Barcelona, is also the hub for mainstream tourism and sports like football.

In 2014, a non-binding Catalan self-determination referendum was held. Over 80% of the people voted in favor of independence. The momentum for an independent state once again began to build in 2017. A vote for the region’s secession was held on October 1st, 2017. Out of 5.3 million registered voters in the region, more than 2.2 million people voted, according to Catalan officials. Just under 90% voted in favor of secession. Political crisis marred by violence has since erupted in the region. Spain has rejected Catalonia’s declaration of independence. The government has also removed Carles Puigdemont, the Catalan leader. In addition, it was revealed that the Spanish court was considering jailing Puigdemont and other leaders of the secessionist movement. 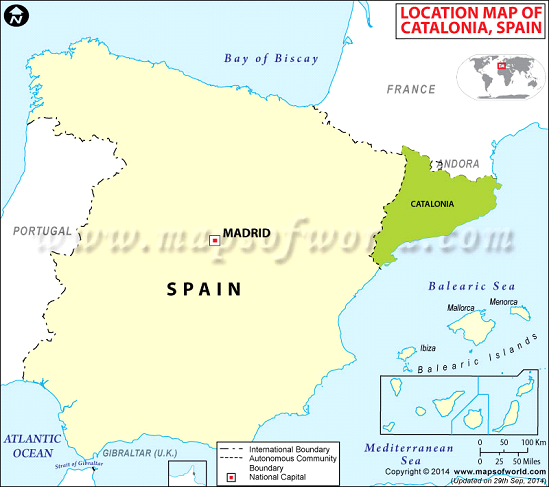 Spain has also ordered fresh elections to be held on 21st December.

Belgium’s Migration Minister, Theo Francken, had stated that the nation might offer Puigdemont asylum should he seek it.

In November the crisis escalated as eight of the Catalan ministers who had been removed by the main government were remanded in custody by a Spanish high court judge over the region's push for independence. Prosecutors are also seeking a European Arrest Warrant for ousted Catalan leader Carles Puigdemont. Among those who have been jailed is Puigdemont’s deputy, Oriol Junqueras.

Here’s the list of those who have been remanded.

Spain’s chief prosecutor, in a request to the Supreme Court for an arrest warrant to be issued for Puigdemont, said, “Repeated attempts to deliver the summons at home and repeated phone calls have been ignored. For his part, Carles Puigdemont has publicly stated his intention not to appear and has requested… to make a statement via videoconference, without giving any information about his current whereabouts.”

Judge Carmen Lamela a ninth, who resigned the day before the Catalan parliament voted to declare independence last Friday, could remain at liberty on bail of €50,000.

Puigdemont delivered a short statement from an undisclosed location in Belgium that was broadcast on Catalan TV. He said that the detention was “an act that breaks with the basic principles of democracy". He added, “I demand the release of the ministers and the vice-president."

Our assessment is that the nation and the region remain deeply conflicted and polarized. There is no clarity over who will be governing the region of Catalonia until the December elections. Critics have also suggested that by jailing former ministers, the Spanish government is undermining the region’s democracy. The repercussions of this constitutional crisis will be felt for years to come.