Indian government has lowered the economic growth forecast for the country and noted that the nation is estimated to grow at 6.5% for the period between 2017-18. This is a four year..

Indian government has lowered the economic growth forecast for the country and noted that the nation is estimated to grow at 6.5% for the period between 2017-18. This is a four year low for the nation.

The forecast was revealed ahead of the Union Budget which is expected to be revealed in February 2018.

The Union Budget of India, also referred to as the Annual financial statement in the Article 112 of the Constitution of India, is the annual budget of the Republic of India. The Government presents it on the first day of February so that it could be materialized before the commencement of new financial year in April. Till 2016 it was presented on the last working day of February by the Finance Minister of India in Parliament.

India is a developing economy. It is the world's seventh-largest economy by nominal Gross Domestic Product. It is also the third largest economy in terms of purchasing power parity (PPP). However, it ranks at 141 in per capita GDP (nominal).

The Indian economy experienced a huge spurt in its growth rate in the 1990s. This has been attributed to abolishment of the License Raj system that had been in place from 1947 to 1990. Thus, India was able to achieve a growth rate of 6-7% annually. It became one of the fastest growing major economies in the world.  In June 2017, it was revealed that India’s economic growth had slowed to 6.1% in the fourth quarter ending March 2017 as compared with 7.1% in the previous quarter. The growth rate has further slowed down during the April-June period to 5.7% -  a three-year low.

The economic slowdown has been attributed to the effects from demonetization and the roll out of GST. The Goods and Service Tax is a value added tax, which is multi-stage and destination-based taxation on each stage of good and service production as well as generation. 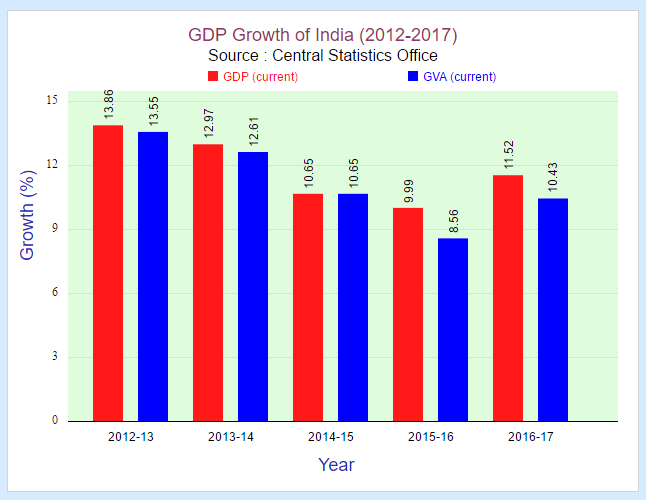 In September 2017, the Indian government announced that the retail inflation in the country rose to 3.36 per cent in August from a year earlier. Additionally, International Monetary Fund downgraded India’s economic forecast.  The body lowered India’s growth projection to 6.7% in 2017, 0.5 percentage points less than its previous two forecasts in April and July.  It also lowered the nation’s growth rate in 2018 to 7.4%, 0.3% less than previous two projections.

Indian government has lowered the economic growth forecast for the country and noted that the nation is estimated to grow at 6.5% for the period between 2017-18. This is a four year low for the nation. The forecast was revealed ahead of the Union Budget which is expected to be revealed in February 2018. Finance Minister Arun Jaitley had earlier estimated the economy would grow around 7.5 percent for the same period.

Shubhada Rao, chief economist at Yes Bank said, “The GST transition impact is clearly visible.” She added that specific industries especially those in the manufacturing sector and the hotel industry have been badly hit as a consequence.

Petrol and diesel prices in India are at a three-year high. This despite the fact crude oil prices have almost halved during the period. For India to be able to pull millions out of poverty, the GDP will have to grow at a steady rate of 7%.

Our assessment is that the Indian economy has been detrimentally hit by the roll out and the implementation of GST. The nation, in addition, is also facing an underemployment problem. There are 12 million Indians entering the workforce every year but many do not have the education and work skillset required to get salaried employment. The economic growth would have to be higher than 7% in order to ensure recovery. However, at 6.4%, this seems unlikely for the near future.