In what’s likely to a massive blow to the Trump administration, former National Security Adviser Michael Flynn has pleaded guilty to making false statements to the FBI..

In what’s likely to a massive blow to the Trump administration, former National Security Adviser Michael Flynn has pleaded guilty to making false statements to the FBI about meetings with Russia's ambassador right before Donald Trump became President.

Reports have since emerged that the President’s son-in-law and Senior White House advisor, Jared Kushner was the one who directed Flynn to establish contact with the Russian government prior to Trump Presidency.

After the elections, Flynn was appointed the National Security Advisor for President Donald Trump. He served from January 20th 2017 to February 13th, 2017. He was forced to after information surfaced that he had lied to Vice President Mike Pence about the nature and content of his communications with the Russian ambassador to the U.S., Sergey Kislyak. On April 27, 2017, the Pentagon inspector general announced an investigation into whether Flynn had accepted money from foreign governments without the required approval.

Trump has reportedly expressed his regret in letting General Flynn resign. He also reportedly requested then FBI chief James Comey to drop the investigation on Flynn as he was a “good man.” Later, Trump would fire Comey. Reports have emerged that Trump may be under investigation for obstruction of justice. 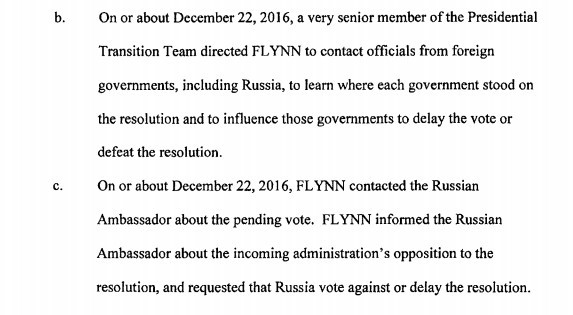 Former National Security Adviser Michael Flynn has pleaded guilty to making false statements to the FBI about meetings with Russia's ambassador right before Donald Trump became President. Reports have since emerged that the President’s son-in-law and Senior White House advisor, Jared Kushner was the one who directed Flynn to establish contact with the Russian government prior to Trump Presidency.

In November 2017, Kushner was questioned by special counsel Robert Mueller’s team of investigators about Flynn. There has been speculation that it is possible that Kushner could be the next person from the Trump administration to be indicted. Incidentally, it has been confirmed that Kushner was also present at a meeting with Russian lawyer Veselnitskaya. The person who set up that meeting stated that he had information about Hillary Clinton from Russian players. So far, Flynn is the most senior member of the administration to be indicted.

Flynn appeared in a federal court in Washington DC. It was here he plead guilty and admitted to one count of knowingly making "false, fictitious and fraudulent statements". In a statement, Flynn said he acknowledged that his actions "were wrong, and, through my faith in God, I am working to set things right. "My guilty plea and agreement to cooperate with the Special Counsel's Office reflect a decision I made in the best interests of my family and of our country. I accept full responsibility for my actions," he said. Only a year earlier, had he been leading chants against Hillary Clinton urging crowds to call for her imprisonment. At the court, prosecutor Brandon Van Grack said that a “very senior member of the transition team directed” Flynn to contact Kislyak (Russian Ambassador). He had been directed to contact Russians to lobby against an “anti-Israel” UN resolution. The prosecution has also established that Flynn falsely said he did not ask Kislyak to delay the vote on the UN Security Council resolution.

Flynn’s plea indicates that he is working and cooperating with the special counsel office. This means he might agree to wearing a wire and conducting covert conversations on behalf of the prosecution.

Our assessment is that even though this does not directly implicate Trump himself, there is now a direct line connected between Russian players and the Trump administration. It is possible that Kushner and Donald Trump Jr would be next to be indicted.