Flash floods and heavy rains have displaced over 150,000 people in Somalia. Somalia is still reeling from the devastating effects of drought and famine. Last year..

Flash floods and heavy rains have displaced over 150,000 people in Somalia. Somalia is still reeling from the devastating effects of drought and famine. Last year, floods across South Asia killed over 1,200 people and affected 40 million lives.

Somalia is the easternmost country in Africa, located on the Horn of Africa. In the 1800s, after the fall of the Sultanate to regional powers, Somalia was occupied by Egypt, France, Britain, and Italy. Italy had captured a large proportion of the country by the 1900s. In 1956, Italian Somaliland was renamed Somalia. The country gained independence from British and Italian forces in 1960.

A turbulent nation, Somalia has been plagued by anarchy since 1991 when Mohamad Siad Barre’s military regime was overthrown, and the country fell to warring clans. UN peacekeeping missions failed through the 90s. A tentative government formed in 2000 ended when the two regions of Somaliland and Puntland broke away. Through the 2000s, the country has struggled to fight against infiltrating militia loyal to the Islamist Courts, and later jihadist groups. In 2012, a formal parliament backed by the international community was finally established.

Despite internal conflict, the most disastrous incidents in Somalia are quite possibly the droughts it has suffered for the past 25 years, and the famines that result. The most recent of these was in 2016-2017, when rains failed for three successive seasons. Last January, the nation declared drought to be a national emergency, and managed to avert a famine after a coordinated effort by the local government and international aid agencies through the 2017 Humanitarian Response Plan.

Despite this, it is estimated that displacement due to conflict and drought in 2017 was higher than it has ever been, and that food security needs have nearly doubled from the five year average. Humanitarian Coordinator for Somalia, Peter de Clercq, stated “much must be done to eliminate the looming threat of famine in this country”. An estimate of 1.2 million children will be malnourished in 2018, a fifth of them life-threateningly so. 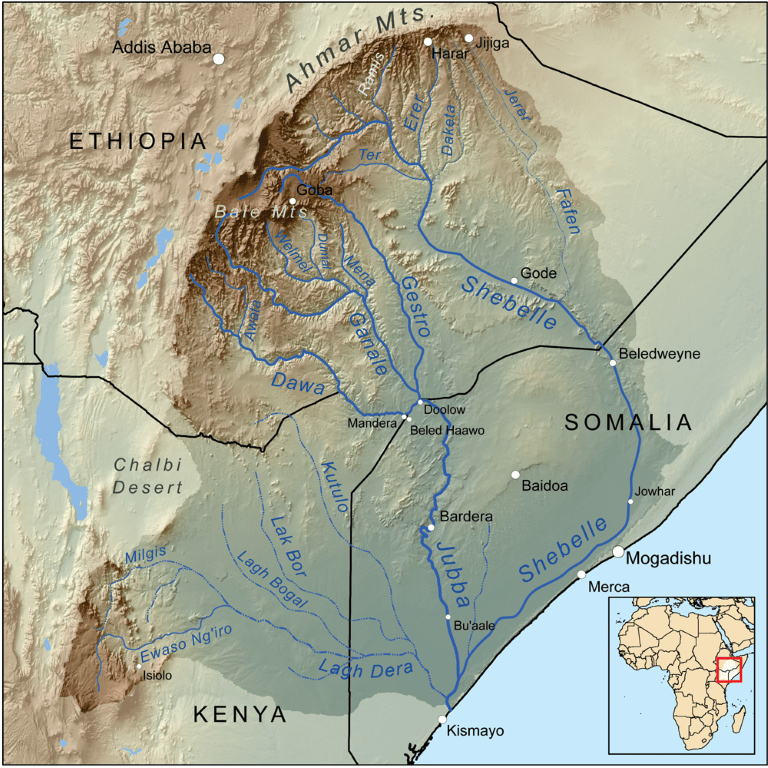 In late April, Somalia faced flash floods that displaced over 150,000 people, and affected close to 500,000, according to UN data. The floods were a result of Gu rains, which occur every year from March to June. These rains often result in flooding, however, the intensity of these floods has worsened in recent years. Rains beginning last month caused the Juba and Shabelle rivers to flood their banks. Belet Weyne, HirShabelle, Jubbaland, and South West are some of the states that are most adversely affected. The FAO has forecast more rains over the next week, and river levels are likely to continue to rise.

Stéphane Dujarric, the spokesperson for the UN Secretary-General noted that Somalia’s Internally Displaced Persons (IDPs) will be the most vulnerable to the flooding, as many camps are located in low-lying regions. Some estimates put the number of IDP at 2.1 million, a result of a prolonged civil war, competition over resources, and years of famine. Approximately 5.4 million people are estimated to be in need of assistance in Somalia already.

Floods have enormous social consequences that include loss of human life, damage to property, destruction of crops, loss of livestock, and deterioration of health conditions due to waterborne diseases including Cholera and Acute Watery Diarrhea. The WEF has estimated that natural disasters cost the world $1.5 trillion between 2003 and 2013. They caused more than 1.1 million deaths and affected the lives of over 2 billion people.

The African Union Mission in Somalia, WHO, UN, and WASH are some agencies that have provided humanitarian assistance to the region so far. “Humanitarian partners on the ground have prioritized water, sanitation, hygiene, [health,] shelter and food response in their interventions,” Dujarric said. Initiatives such as the FAO’s Somalia Water and Land Information Management (SWALIM) program help improve flood risk management in Somalia.

Funding for the 2018 Humanitarian Response Plan for Somalia currently stands at over $300 million out of an estimated $1.5 billion requirement. Agencies have warned that these funds could be insufficient to support the humanitarian operations required in the region, which include drought and flood assistance.

Our assessment is that natural disasters could further weaken the economy and formal government institutions in Somalia. Floods have the potential to adversely affect agricultural output and cause severe financial losses. We believe that international agencies can help equip Somalia’s government with early warning and risk management strategies. However, as stated previously, the root causes of such vulnerabilities must be addressed.  Reinforcing the capacity of formal institutions in the country could help minimise conflict, and build the country’s resilience to drought, floods, and famine.