A Flag-bearer in Tech?

Reinvigorating the call for a free and open Indo-Pacific, the heads of state from India, Japan, Australia, and the United States have met in Washington for their first in-person summit. The agenda mirrored the last meeting - climate change, critical technologies, and the COVID-19 pandemic. However, since it came in the wake of the Australia-U.S.-UK (AUKUS) submarine pact, it has taken on a greater significance.

At a time when AUKUS has triggered speculations about an Anglo-Saxon security partnership in the Indo-Pacific, the emphasis on ‘non-military’ aspects of cooperation by the Quad is especially noteworthy. With AUKUS in place, the latter group appears to be rebranding itself as a counterweight to China in other strategic domains. Nowhere is this more visible than in critical and emerging technologies, with the four countries enumerating for the first time their joint principles on ‘Technology Design, Development, Governance and Use’.

Informed by democratic values and respect for universal human rights, the Quad is seeking to establish a common architecture for technology. It also aims to further global cooperation by securing supply chains for hardware, software and other services. Whether this translates into an actionable roadmap on the ground remains to be seen, as member-nations are still divided over issues like data flows and indigenous technology standards.

Since its much-celebrated revival in 2017, the Quad has viewed critical technologies as an important lynchpin in advancing multilateral cooperation. This has also coincided with emergent national narratives about bolstering information security and countering the dominance of Chinese technology vendors in all four member states.

It is no surprise, therefore, that a working group on critical and emerging technologies was constituted in March 2021, identifying several broad areas for collaboration. This included the development of technology standards, deployment of telecommunications and diversification of equipment suppliers. At the time, however, there was no common understanding about the technologies that would qualify as ‘critical’ and ‘emerging’.

With the recently concluded leaders’ summit, this fog over the technological goals of Quad has somewhat dissipated, as 5G, semiconductors, outer space technology, artificial intelligence, and biotechnology have been assigned special importance. As articulated in the published press statement, the four Quad countries will join hands to devise uniform standards for technology design, development, governance and use, while placing adequate emphasis on the need to establish resilient, diverse and secure supply chains.

Although China has not been explicitly mentioned in the statement, there is little doubt that these initiatives are intended to offset its ascendancy in the technology and digital spheres. For instance, the joint principles have asserted that “technology should not be misused or abused for malicious activities such as authoritarian surveillance and oppression”. This is clearly a dig at the Asian giant, which has often been criticised for strong-arming digital vendors and using technologies like facial recognition systems to conduct illegal surveillance.

Similarly, the focus on achieving self-sufficiency in semiconductors represents an attempt to diversify supply chains away from Beijing’s sphere of influence. Meanwhile, the reference to ‘secure, open, and transparent 5G networks’ is a thinly veiled attempt to loosen the grip of Chinese telecom firms like Huawei and ZTE. 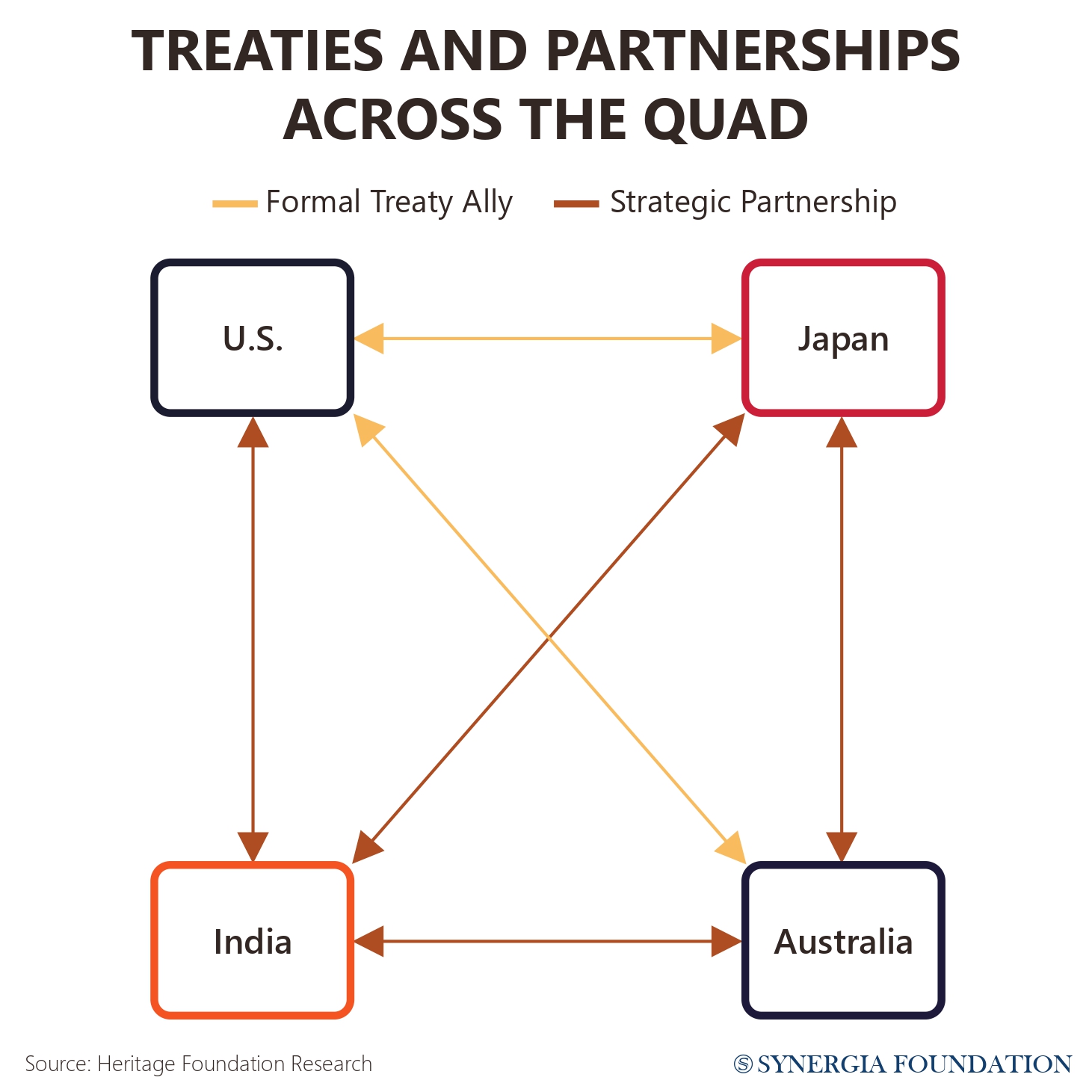 Among the many proposals for tech cooperation that have been outlined, the bid to frame uniform technical standards is particularly significant. If implemented, this would be a veritable gamechanger in the geopolitical arena, providing strategic and economic benefits to the Quad nations. Their domestic companies, in particular, would be able to assert ownership of global standards in critical technologies, thereby controlling related supply chains. Once the required scale is achieved, the remaining tech vendors would have no option but to follow suit. In other words, a state’s ability to obtain technological self-sufficiency is heavily dependent on its ability to dictate international technical standards.

Acknowledging this, the Quad has sought to assert itself as a global norm-setter in the design and governance of critical and emerging technologies. In particular, it has pressed for ‘safety’ and ‘security-by-design’ approaches in the technology development process, integrating the values of autonomy, agency and dignity of individuals. It has also pushed for interoperability between telecommunications equipment through mechanisms such as the Open Radio Access Network (O-RAN). By requiring the hardware and software from different vendors to effectively interface with each other, the initiative seeks to expand consumer choice and restrict commercial monopolies.

Similarly, the Quad has envisaged standards development in artificial intelligence and cyber security. Towards this end, it has mooted the establishment of contact groups on Artificial Intelligence as well as a Quad Senior Cyber Group. Both will be premised on a democratic model of tech governance, facilitating collaboration between the government and industry. Although the issue of norm-setting in the chip industry has not received much attention, there is a significant opportunity for the alliance to sponsor new standards in sectors like composite semiconductors, fabless design, silicon manufacturing equipment etc.

Finally, the Joint Principles on Technology can form the basis for a coordinated Quad leadership at multilateral institutions like the International Telecommunications Union. The four nations would be in a privileged position to advocate for common standards in Information and Communications Technology (ICT). For India, it would also be an opportunity to bridge the gap between its significant presence in global technology markets and its relatively less significant presence in international standard organisations.

Despite a shared ambition to formalise standards and establish democratic models of governance, the Quad nations do not necessarily see eye-to-eye on all technology-related issues. India, in particular, is an outlier when it comes to data flows and telecommunication standards.

For example, the country has declined to be a part of the “Osaka Track” initiative launched in 2019, which seeks to standardise the rules on cross-border movement of data among G20 nations. Similarly, it has been embroiled in disputes with American firms like Google, Mastercard, Visa and Amazon, over the terms of its data localisation laws. Unless there is a Quad-wide agreement on the standards for data storage and transfer, therefore, the joint principles on critical technologies may remain a paper tiger.

India’s indigenous standards on 5G technology is yet another sticking point. Known as 5Gi, this locally curated standard has been approved by the ITU, augmenting the country’s efforts to garner geopolitical heft in the international telecommunication space. However, it has raised concerns about interoperability, with major vendors alleging that 5Gi will necessitate significant hardware changes. There are also worries that India’s 5G ecosystem may become isolated from the standards that govern other telecommunications markets, hindering a common approach on 5G telecom technology. Given this reality, Quad nations will have to engage in sustained negotiations about their national technology standards before aspiring to be global norm-setters.