As countries around the world hastened their vaccine rollouts to battle the Delta variant of COVID-19, it was hoped that the pandemic would be nearing its end. However, a new variant has emerged with renewed vigour, signalling that the virus may linger on well into 2022. This should serve as a grim reminder to the global community that “none of us is safe till all of us are safe”.

The principle of ‘vaccine equity’ seeks to ensure that vaccines are distributed in a fair manner across the globe. Although the development of COVID-19 vaccines has happened in record time, their distribution has not occurred at the rate required to beat the virus. As can be recalled, the World Health Organisation (WHO) had set a target for September, whereby all countries were required to complete 10% full vaccination. However, fifty-six countries have missed this target, with most of them being concentrated in Africa.

Experts predict that even more countries will miss the 40% target that WHO has set for the end of the year and the 70% target set for mid-2022. The majority of vaccinations have been given to people in upper and upper-middle-class countries. There has been a failure to develop a global infrastructure to share vaccines. Compounding this problem, most vaccine producers are not willing to share information that would allow others to make their own vaccines. 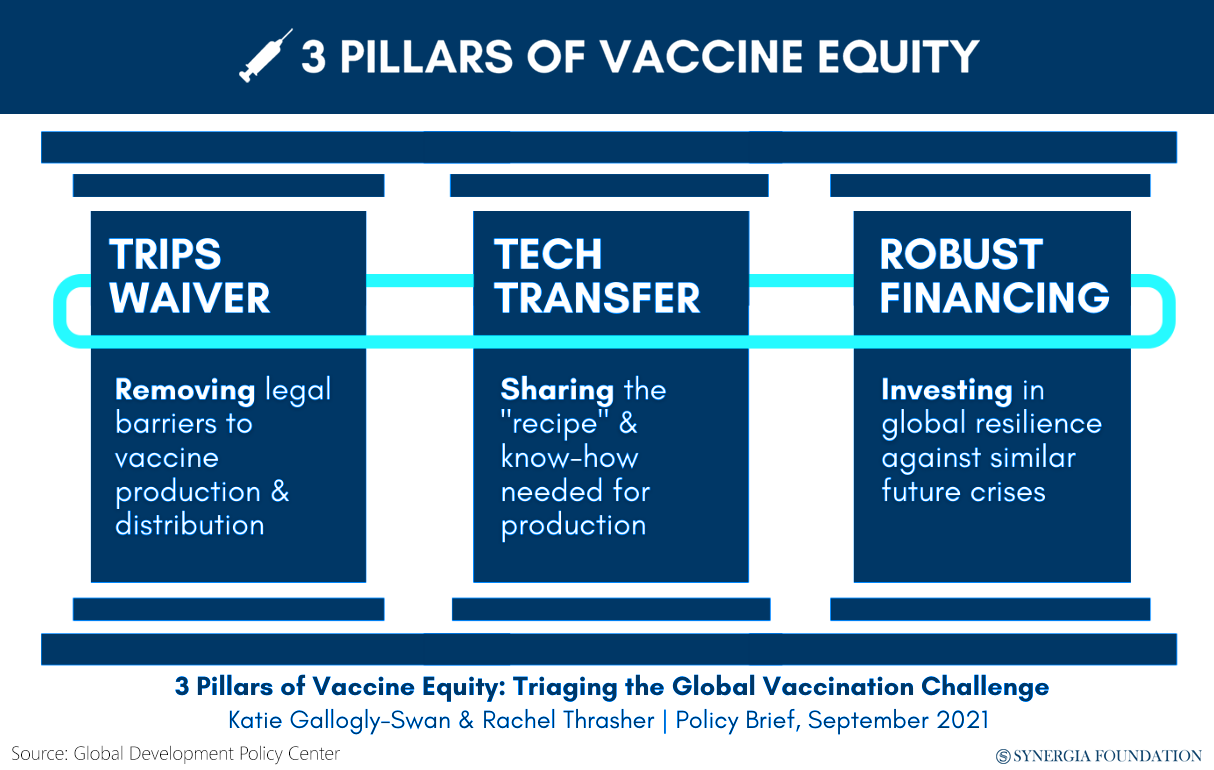 In what is a clear case of vaccine nationalism, richer nations have not only secured the required number of vaccines for their population, but have also hoarded more than necessary. Although the U.S. has millions of AstraZeneca doses, the Centers for Disease Control and Prevention (CDC) has not even approved its use in the country.

When it comes to vaccine equity, it is not just a question of morality or ethics. Equitable distribution is absolutely imperative to beat a pandemic of such scale and magnitude. After all, the COVID-19 virus respects no borders. Recently, a new strain called 'Omicron' has been discovered in South Africa, resurrecting the vaccine equity debate. At the moment, it has not been established if the variant can evade vaccines and trigger serious illnesses in inoculated people. However, the first death has already been reported in the U.K. Any exacerbation of this situation would portend dangerous consequences for the entire world. If a significant proportion of the global population continues to remain unvaccinated, the possibility of new, vaccine-resistant variants emerging cannot be ruled out.

With the new Omicron strain emerging, countries all over the world have rushed to close their borders. The WHO has chided wealthy nations who are prompt in closing their borders to African countries, but have not ensured that poorer nations have equitable access to vaccines. In fact, it has termed the border restrictions as ‘ineffective’ and ‘unfair’. The director-general of the WHO has stated that "travel bans will not prevent the spread of Covid".

Epidemiologists have also echoed these sentiments. Caroline Colijn, an epidemiologist at Simon Fraser University, observed that it is ‘wishful thinking to believe that a variant can be contained to one area. Colijn made it clear that measures should apply at the borders; however, restrictions like the ones we are seeing now will potentially do more harm than good. According to her, these types of rules will only make countries more hesitant to share data in the future.

The WHO's Regional (Africa) Director pointed out that the imposed restrictions will be ineffective and harm the livelihood of people. African nations cannot be blamed for their lack of vaccines, and they should not be punished for its consequences. In fact, medical professors and scientists have pointed out that the strain may have already been moving for quite some time.

Meanwhile, many first-world nations have announced plans to give every adult a booster dose, something which has been denounced by the WHO. According to the international body, there is insufficient data to argue that all adults require boosters and that they will be helpful against new strains. For now, our best shot at containing the pandemic is to share vaccines and boost immunisation rates across the world.

Although the COVAX initiative formed by the WHO, Gavi and the Coalition for Epidemic Preparedness Innovations (CEPI) has sought to ensure an equitable distribution of vaccines, richer countries have bypassed its infrastructure to strike bilateral deals with vaccine developers. As a result, they have secured access to vaccines before their developing and under-developed counterparts.

While vaccine inequity is a significant impediment, the problems emanating from vaccine hesitancy is also a key concern. Current studies show that vaccine hesitancy is not as high in low-income countries as it is in certain high-income countries. This can also contribute to the extension of the pandemic. Misinformation and disinformation have to be strictly regulated so that people are not dissuaded from inoculating themselves.