Sean Parker, the first President of Facebook has spoken critically about Facebook and the power of social media. He said that tech giant’s founders knew they were creating..

Sean Parker, the first President of Facebook has spoken critically about Facebook and the power of social media. He said that tech giant’s founders knew they were creating something addictive that exploited “a vulnerability in human psychology”.

In 2017, Facebook reported higher than expected revenue. Its stocks have risen significantly as well. In contrast, Snapchat has struggled. The social media company reported worse-than-expected quarterly results and its stocks fell as a result.

Facebook’s posted a strong Q2 2017 earnings report. It earned $9.32 billion and $1.32 in GAAP actual EPS, compared to estimates of $9.2 billion revenue and $1.13 EPS. Revenue growth was 44.7 percent year-over-year. Studies now estimate that now get most of their news updates either through Facebook or through other social media platforms like Twitter. It has been suggested that social media played a crucial role in the recent elections like the American Presidential elections, French elections and more. In regards to the American Presidential elections, reports have emerged of Russian players Facebook to create division in USA. In India, politicians have spoken about how unverified Facebook videos have been used to incite communal violence among millions.

Sean Parker is an American entrepreneur who cofounded the file-sharing computer service Napster. He served as the first president of Facebook. He also cofounded Plaxo, Causes, Airtime.com, and Brigade, an online platform for civic engagement. On the Forbes 2016 list of the world's billionaires, he was ranked #722 with a net worth of US$2.4 billion. 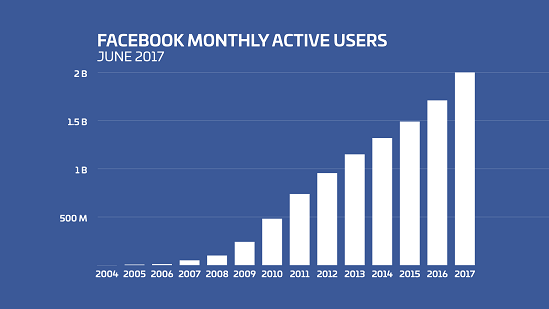 During a recent event, Sean Parker spoke critically about Facebook and the power of social media. He said that Facebook’s founders knew they were creating something addictive that exploited “a vulnerability in human psychology”.

Speaking on stage to Mike Allen from Axios, Parker said, “The thought process that went into building these applications, Facebook being the first of them, was all about: 'How do we consume as much of your time and conscious attention as possible?”

Parker went on to state that social media validation is akin to drug use adding, “That means that we need to sort of give you a little dopamine hit every once in a while, because someone liked or commented on a photo or a post or whatever. And that's going to get you to contribute more content, and that's going to get you... more likes and comments.”

Parker also spoke about the early days of social media saying, “When Facebook was getting going, I had these people who would come up to me and they would say, 'I'm not on social media.’ And I would say, 'OK. You know, you will be.’”

He then added: "I don't know if I really understood the consequences of what I was saying, because [of] the unintended consequences of a network when it grows to a billion or two billion people and, it literally changes your relationship with society, with each other. It probably interferes with productivity in weird ways. God only knows what it's doing to our children's brains.”

Our assessment is that as social media becomes more pervasive and powerful, it will also have negative consequences on society. Research has indicated that employees spend more than 32 per cent of their time on social media every day for personal work. This will affect the work output in companies as well as affect the overall economies of nations. In addition, social media can also affect other spheres such as divisive politics as social media can be used to exploit people’s emotions.