As reports emerge about China testing a nuclear-capable hypersonic glide weapon, the international community is growing jittery. According to the Financial Times, which broke the story, the country’s military had launched a rocket carrying the hypersonic glide vehicle in August 2021. Given its purported ability to circumvent U.S. missile defences, strategic analysts are scrambling to assess the implications of this new combat capability.

Highly coveted by global powers, hypersonic missiles are fast and agile, travelling in the upper atmosphere at five times the speed of sound. With the ability to deliver nuclear warheads, they can fly over great distances and manoeuvre through heavily defended airspaces to attack targets.

Although they are slower than ballistic missiles, their trajectory is less predictable, as they do not follow a fixed parabolic path. Hypersonic weapons can be manoeuvred aerodynamically, making it difficult for adversaries to track or intercept them. 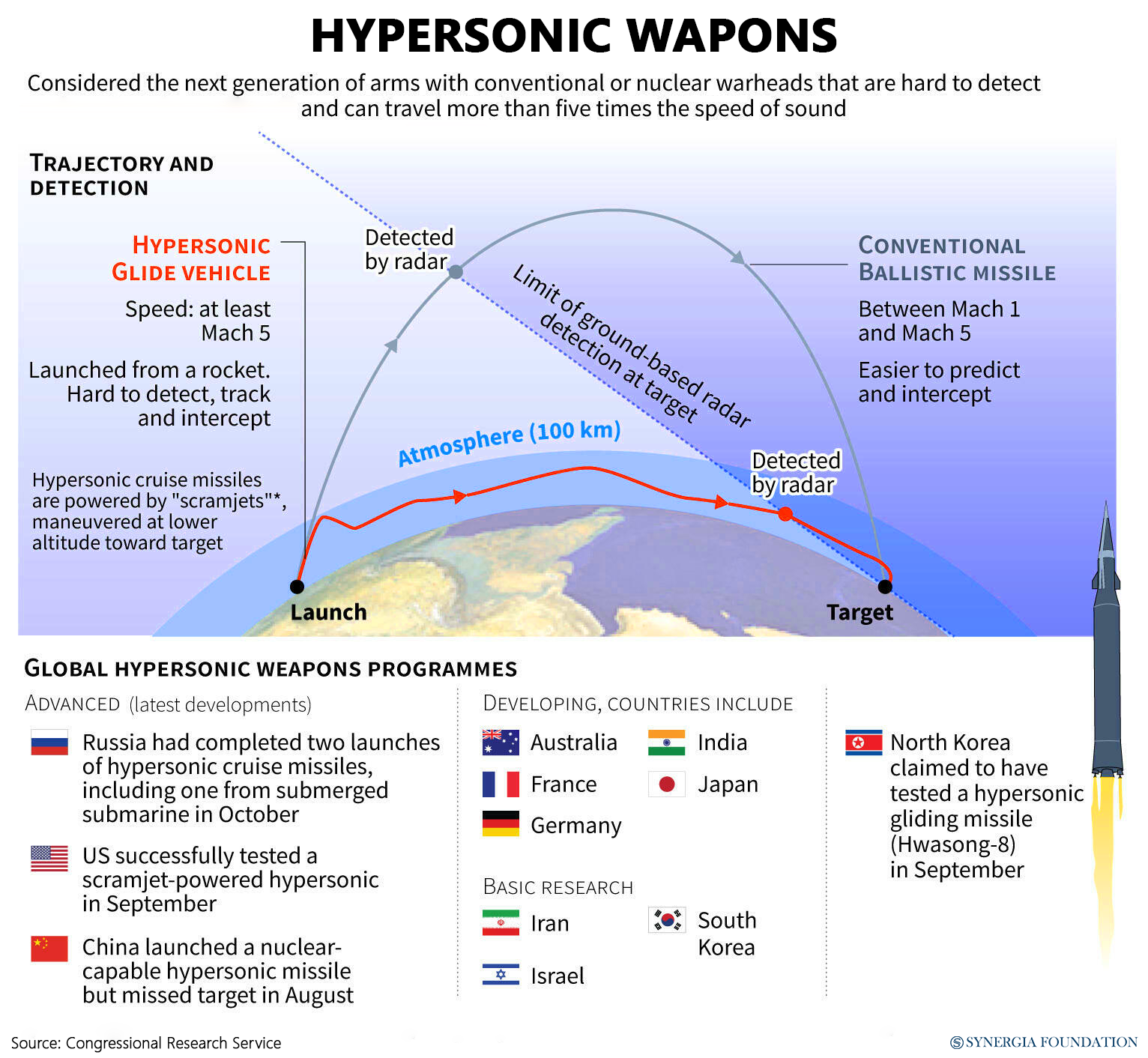 The recent test by China has captured global headlines, as it combines two different technologies in a novel way, thereby undercutting the detection and tracking capabilities of America’s missile defence systems.

Firstly, it has deployed a Fractional Orbital Bombardment System, which rather than moving in a parabolic arc, enters the Earth’s orbit. This allows the warhead to travel to the U.S. over the South Pole without encountering the radar shields and missile defences currently pointed towards the North Pole.

Secondly, the glide vehicles are designed with a high ‘lift-to-drag ratio, which means they can glide unpowered for longer distances once the weapon is de-orbited. It also provides a highly manoeuvrable platform for hypersonic missiles, which can travel at high speeds, reposition mid-flight and cruise down to their targets without being tracked.

Although the latest launch by Beijing, aboard a Long March rocket, is reported to have missed its target by 25 miles, it is still a demonstration of its impressive progress on hypersonic weapons. Moreover, in the event of an actual war, such an error would be negligible as the blast radius of thermonuclear warheads can be devastatingly broad.

Given this reality, China’s development of a hypersonic glide weapon is touted to be a ‘strategic gamechanger’. With the ability to penetrate missile defence systems, it represents a critical escalation in nuclear strike capabilities. As it is, the Asian power has been building up its stockpile of nuclear weapons, unhindered by arms-control agreements. It is expected to double its nuclear arsenal over the next decade as part of its broader modernisation agenda.

For the U.S. intelligence community, this news has been nothing short of an unpleasant surprise, as analysts had predicted that it would take many more years for China to develop this capability. President Joe Biden and Disarmament Ambassador Robert Wood have minced no words in expressing their concern. Since the ballistic missile defence system will not shield the country from hypersonic weapons, the traditional strategy of nuclear deterrence is likely to consolidate even further, prompting a veritable arms race.

Already, the Pentagon’s Defense Advanced Research Projects Agency has tested an air-breathing hypersonic weapon. Companies like Lockheed Martin and Raytheon Technologies are also believed to working on the development of hypersonic weapons capabilities. In this context, it remains to be seen how arms-control advocates make their voices heard in the ongoing Nuclear Posture Review by the Biden administration. If anything, China’s advancements in hypersonic glide weapons are likely to spur those who argue for a modernisation of the U.S. nuclear arsenal.

Beijing, meanwhile, has dismissed all reports about the testing of its nuclear-capable hypersonic missile. As per the spokesperson of the Foreign Ministry Mr. Zhao Lijian, it was merely engaging in a routine check of civilian spacecraft to test the re-usability of this vehicle. Whether or not this is true, its mouthpiece – the Global Times has hailed the test as “a new blow to the U.S. mentality of strategic superiority over China”.