Eurozone on the rise

The Eurozone grew by 0.6% in the three months to September 2017. This is above the expectations set by analysts. According to Eurostat, the growth rate in the past..

The Eurozone grew by 0.6% in the three months to September 2017. This is above the expectations set by analysts.

According to Eurostat, the growth rate in the past 12 months has been 2.5%.

The Eurozone (officially called the Euro area) denotes to the 19 of the 28 European Union (EU) member states that have adopted the Euro as their common currency. It was established in 1999 and its GDP as of 2016 stood at $11.8 trillion.

The UK was never part of the Eurozone, having retained the Pound as its currency. It had negotiated an opt-out as part of the Maastricht Treaty of 1992. In 2016, the region voted to leave the EU altogether. Britain is currently in midst of negotiations with EU officials drafting a suitable exit roadmap.

According to the data from the Eurostat, the 19 members part of the Eurozone, saw their growth accelerated by 0.6% in the three months to June 2017. The year-on-year growth has increased to 2.1% as compared of 1.9% from the same quarter last year. This is the best number the region has seen in the past five years. Forecasts have also been bullish regarding the growth of the bloc in the near future. IMF has said that the Eurozone GDP will grow by 1.7% in 2018. 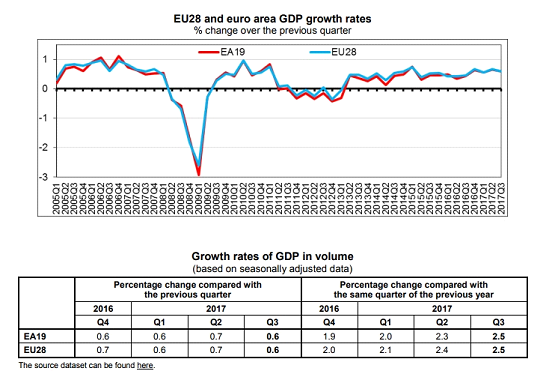 This is the highest annual growth rate since the first quarter of 2011. During this period, the Eurozone along with most world economies witnessed a temporary rebound from the deep recession caused by the global financial crisis.

Economists are still debating on why the region is seeing robust growth. In the last 17 quarters, the Eurozone economy has grown and the unemployment rate has also dropped significantly dropped to 9.1%. Some have suggested this strong growth is due to a cyclical bounceback.

Since the financial crisis of 2008, UK’s growth has consistently outperformed the Eurozone. This was until the Brexit vote which saw the UK narrowly voting to leave the EU. In 2017, the International Monetary Fund also lowered its projected growth-rate for UK. It now forecasts UK’s growth in 2017 will be 1.7%. In a reversal of trends, the Eurozone has for the first time in nine years begun outperforming UK’s economic growth. 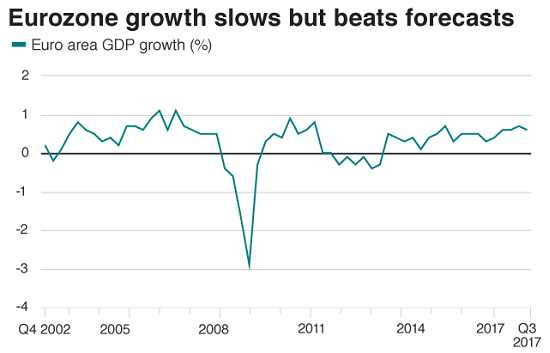 Unemployment is also on the decline in the region. The eurozone unemployment declined to 8.9 per cent in September. This is the lowest it has been since January 2009. Greece has also begun showing signs of recovery. According to the latest stats, Greek unemployment dropped to 21 % in July. The total number of those unemployed in Greece is around 1.01 million. Greece's economy returned to growth in the first three months of 2017. France’s GDP grew by 0.5 per cent in the third quarter.

Inflation in Eurozone fell to 1.4% in October, down from 1.5% in September. The European Central Bank had kept a benchmark of 2% for inflation for the year and this falls well below that. The ECB has raised its 2017 growth forecast to 2.2%. This would be the fastest growth in a decade.

Our assessment is that the latest figures prove that the Eurozone is well on its way to recovery after the 2008 financial crisis. It sends the message that Eurozone is back to gaining some strength. However, there are still some troubling signs for the region. Unemployment rate in some of the countries is still too high and the inflation is too low, at least in accordance to the European Central Bank.