The Eurozone economy is expected to grow at 2.4% this year. The estimates were released by zhe European Central Bank (ECB) which revised and raised the growth..

The Eurozone economy is expected to grow at 2.4% this year. The estimates were released by zhe European Central Bank (ECB) which revised and raised the growth rate from 2.2% due to strong better than expected growth in the region.

The Eurozone (officially called the Euro area) denotes the 19 of the 28 European Union (EU) member states that have adopted the Euro as their common currency. It was established in 1999 and its GDP as of 2016 stood at $11.8 trillion.

The UK was never part of the Eurozone, having retained the Pound as its currency. It had negotiated an opt-out as part of the Maastricht Treaty of 1992. In 2016, the region voted to leave the EU altogether. Britain is currently in the midst of negotiations with EU officials drafting a suitable exit roadmap.

According to the data from the Eurostat, the 19 members, part of the Eurozone, saw their growth accelerated by 0.6% in the three months to June 2017. The year-on-year growth has increased to 2.1% as compared to 1.9% from the same quarter last year. This is the best number the region has seen in the past five years. Forecasts have also been bullish regarding the growth of the bloc in the near future. IMF has said that the Eurozone GDP will grow by 1.7% in 2018.

In addition, the Eurozone has been dealing with the consequences of the Greek debt crisis in the past years. Unable to sustain itself having joined the Eurozone in 2011, Greece’s trade deficit increased, and its unemployment rate rocketed to 25%. 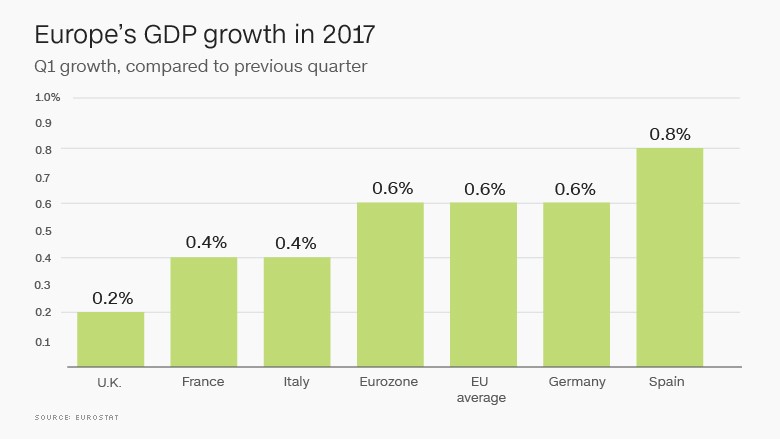 The European Central Bank (ECB) has raised the growth forecasts for the region and now expects the Eurozone economy to grow 2.4%. This is higher than the previous forecast which had expected the growth to be at 2.2%. ECB has also announced that it will be keeping its monetary policy unchanged at the present.

"The Governing Council expects the key ECB interest rates to remain at their present levels for an extended period of time, and well past the horizon of the net asset purchases," the ECB said in a statement following a meeting in Frankfurt, Germany. ECB announced a reduction in the level of its monthly purchases from 60 billion euros ($71 billion) to 30 billion euros in October.

"If the outlook becomes less favorable, or if financial conditions become inconsistent with further progress towards a sustained adjustment in the path of inflation, the Governing Council stands ready to increase the APP (asset purchase program) in terms of size and/or duration," the ECB added.

"The economic expansion in the euro area continued in the third quarter of 2017, when real GDP increased by 0.6 percent quarter-on-quarter," ECB President Mario Draghi said following the meeting.

"The latest data and survey results point to solid and broad-based growth momentum... Private consumption is underpinned by ongoing employment gains, which are also benefiting from past labor market reforms, and by rising household wealth.

ECB has struggled to increase the core inflation. The bank has projected its intended inflation to be 2%. However, Draghi has stopped short of declaring that ECB will meet its inflation goal in 2020. This signals that the Euro-area isn’t yet strong enough to warrant weaning off monetary stimulus.

Our assessment is that decrease in unemployment level and favorable growth rate indicates that Europe’s economy is in recovery. Business investment has continued to strengthen due to favorable financing conditions and housing investments have also risen.