The European Union has launched a fresh crackdown over taxes paid by tech giants Amazon and Apple. Amazon has been ordered to repay €250m (£221m..

The European Union has launched a fresh crackdown over taxes paid by tech giants Amazon and Apple. Amazon has been ordered to repay €250m (£221m; $293m) in back taxes after the European Commission said it had been given an unfair tax deal in Luxembourg.

The Commission also plans to take Ireland to court over its failure to collect €13bn of back taxes from Apple.

The tax deal between Luxembourg and Amazon was struck in 2003. The Commission said it had enabled Amazon to shift the “vast majority” of its profits from Amazon EU to Amazon Europe Holding Technologies, which was not subject to tax. The ruling was extended in 2011.

The commission’s moves against Luxembourg for its tax rulings on Amazon and Fiat are awkward as Jean-Claude Juncker, its president, was the Prime Minister of the Grand Duchy from 1995 to 2013.

Amazon has two Luxembourg-based subsidiaries: Amazon EU, which operates the company’s European retail business, and Amazon Europe Holding Technologies, which acts as an intermediary between Amazon EU and the U.S. parent — which the Commission described as an “empty shell.” 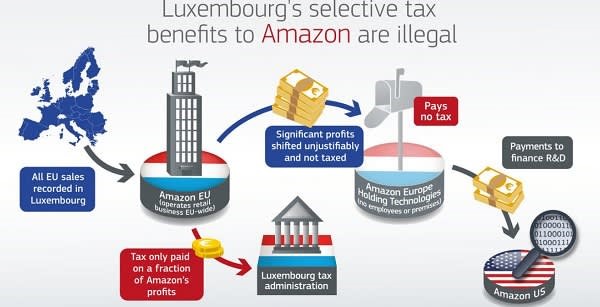 Amazon denied it owed any back tax, saying it did "not receive any special treatment from Luxembourg". "We will study the Commission's ruling and consider our legal options, including an appeal," an Amazon spokesperson said.

But European Competition Commissioner Margrethe Vestager said the Luxembourg arrangement meant that Amazon had been allowed to pay "substantially less tax than other businesses", which it said was "illegal under EU state aid rules".

She said Amazon paid four times less tax than other local companies. "Member states cannot give selective tax benefits to multinational groups that are not available to others."

Meanwhile, the Commission said it planned to refer Ireland to the European Court of Justice for failing to recover €13bn in back taxes from tech giant Apple. It concluded last year that the US firm's Irish tax benefits were illegal, enabling the firm to pay a corporate tax rate of no more than 1%.

The Commission said that more than a year on from that decision, Ireland had still not recovered the money. As a result, it was referring Ireland to the European Court of Justice.

Ireland, which has contested the decision, claiming that EU regulators were interfering with national sovereignty, said the decision was "extremely disappointing".

Emmanuel Macron, the French President, has been leading a push to create a tax on digital giants based on revenues rather than profits.

The commission wants member states to consider four options for increasing the contributions of tech companies. The first, and its clear preference is a comprehensive reform plan to establish a common corporate tax base. There are also three interim solutions: the French turnover tax, a withholding tax on digital purchases from non-resident providers and a tax on digital advertising revenues.

Our assessment is that multinational companies have come under fire since the global financial crisis for shifting profits between subsidiaries to use the differences between countries’ rules to minimise taxes. We feel that there is a strong case for the EU to press for back taxes from both Apple and Amazon as it has created unfair market arbitrage for large technology companies operating from multiple locations around the world.