Artificial intelligence (AI) is shaping up as the next industrial revolution, poised to rapidly reinvent business and the global economy. As science fiction starts to become reality, AI products are slowly infiltrating homes and workplaces.

This has raised concerns about the potential detrimental effects of AI on the job market.

The intellectual roots of AI and the concept of intelligent machines were first found in Greek mythology. Intelligent artefacts appear in literature, and since then, mechanical devices that have been created have demonstrated similar behaviour to some degree of intelligence. Greek myths of Hephaestus, the blacksmith who manufactured mechanical servants, and the bronze man Talos incorporate the idea of intelligent robots.

In 1940, the programmable digital computer was invented, a machine based on the abstract essence of mathematical reasoning. This device and the ideas behind it inspired a handful of scientists to begin seriously discussing the possibility of building an electronic brain.

The field of AI research was founded at a workshop held on the campus of Dartmouth College during the summer of 1956. Many of the participants predicted that a machine as intelligent as a human being would exist in no more than a generation and they were given millions of dollars to make this vision come true. Eventually, it became obvious that they had grossly underestimated the difficulty of the project due to computer hardware limitations.

In 1973, the U.S. and British Governments stopped funding undirected research into artificial intelligence, and the difficult years that followed would later be known as an "AI winter". Seven years later, a visionary initiative by the Japanese Government inspired governments and industry to provide AI with billions of dollars, but by the late 80s,  investors became disillusioned by the absence of the needed computer power (hardware) and withdrew funding again.

Investment and interest in AI boomed in the first decades of the 21st century, when machine learning was successfully applied to many problems in academia and industry due to the presence of powerful computer hardware. As in previous "AI summers", some observers (such as Ray Kurzweil) predicted the imminent arrival of artificial general intelligence: a machine with intellectual capabilities that exceed the abilities of human beings.

One reason why AI is being used more prevalently now than before is because the science and the advancement behind algorithm development are widely available. The abundance of data currently generated makes it a perfect time to use this model.

One of the key principles of algorithm design for AI is that there must be enough 'training' data on which to 'train' the model before it is able to make meaningful predictions. The abundance of data did not exist earlier, in the same capacity as it does now, and it did not exist in tandem with the prevalence of high-speed computing. 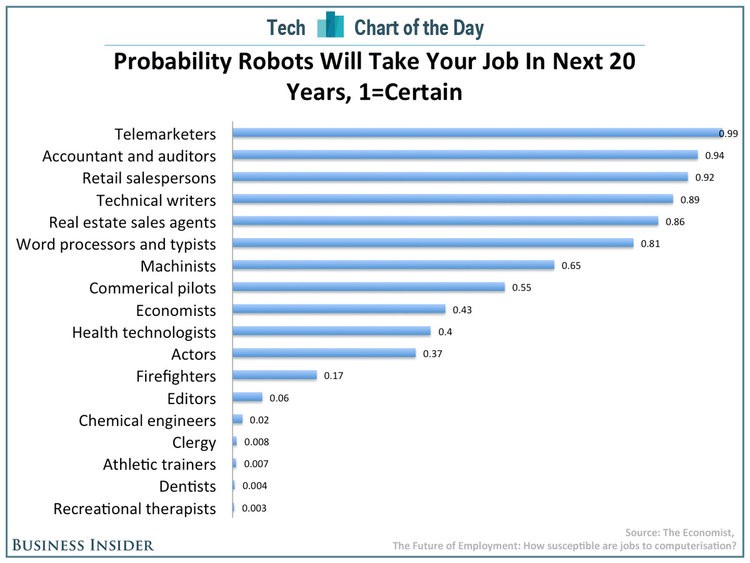 “The development of full artificial intelligence could spell the end of the human race…. It would take off on its own, and re-design itself at an ever-increasing rate. Humans, who are limited by slow biological evolution, couldn’t compete and would be superseded.” – Stephen Hawking

AI has destabilising effects on some aspects of economic and social life. “Labour markets can be heavily impacted if a significant chunk of the workforce is made redundant by new technologies while unable to profit from the new opportunities created by digital markets. Individuals worry about losing control of their personal information and feel increasingly vulnerable to online abuse.” Stated by European Political Strategy Centre (EPSC).

EPSC also stated that “estimates suggest that, already this year, 20% of all global business content will be authored by machines and that, by 2020, AI bots will power 85% of all customer service interactions. The economic impact of AI will be significant and heralds many opportunities for those countries and firms which embrace it. It is estimated that the global adoption of cognitive systems and AI across a wide area of sectors will drive worldwide business revenues from 6.4 billion euro in 2016 to more than 37.8 billion euro in 2020.”

World Bank data estimates that 69% of today’s jobs in India are threatened by automation.

“Since the 1990s Indian firms have carried out back office tasks, and IT services like data entry, running call centres and testing software for foreign companies, etc. But as machines become adept at this repetitive, rule-based work, they are the most at risk,” stated BBC.

AI has the potential to greatly improve industries like healthcare, education, poverty and security. AI machines can do some very beneficial things that humans will simply never be able to. It could also positively impact society, business, and culture on the order of magnitude of the internet itself.

Our assessment is that the purpose of artificial Intelligence should be to scale the human mind and not replace it. The human brain is the most elegant computer in existence. We process millions of sensory inputs automatically and constantly, allowing us to learn and respond to our environment. However, the human brain only contains about 300 million pattern processors that are responsible for human thought. We believe that the world needs a determined Artificial Intelligence strategy because machine learning is particularly important.