The end of NAFTA?

US President Donald Trump has raised the possibility of entirely terminating NAFTA even as Mexico, Canada and US have entered fourth round of negotiations..

US President Donald Trump has raised the possibility of entirely terminating NAFTA even as Mexico, Canada and US have entered fourth round of negotiations.

The most powerful business lobby accused the Trump administration of making “poison pill proposals” to sabotage NAFTA on Tuesday.

NAFTA, which came into force in 1994, is an agreement signed by Canada, Mexico and the US. This trilateral trade bloc eliminated nearly all tariffs on Mexico’s exports to the US and vice versa. Most of US-Canada trade was already duty-free before the agreement was signed.

Attitude towards free trade has significantly changed since the agreement 23 years ago. In 1988, Canada’s Prime Minister, Brian Mulroney, won his election by fighting for Canada-US trade deal (this was replaced by NAFTA). He had the backing of Republican presidents like Ronald Reagan and George H W Bush, who were pro-free trade.

NAFTA primarily is about liberalization of trade, especially in automobile manufacturing, textiles and agriculture. One of the primary reasons why the agreement was initially signed was also to help improve Mexican economy and generate jobs in the country. US authorities believed that development of Mexico would curtail illegal immigration from the region.

In the two decades since it has been enforced, trade in the North Atlantic region has significantly increased. Regional trade in the area has gone from $290 in 1993 to more than $1.1 trillion in 2016. Canada and Mexico are the two largest destinations for U.S. exports.

Protectionism has become a defining theme for world leaders, especially US President Donald Trump. He has already pulled US out of the Trans-Pacific Partnership. He was also a vocal critic of NAFTA while campaigning. He said, “NAFTA is the worst trade deal maybe ever signed anywhere, but certainly ever signed in this country.” He said he was in favor of terminating the agreement entirely. Ties between Mexico and the US have deteriorated with Trump promising to build a wall between the US and Mexico to curtail illegal immigration.

Those who oppose the agreement note that this deal has resulted in loss of jobs in the US. This has occurred because of low-wage competition from Mexico and companies moving their production to that nation. 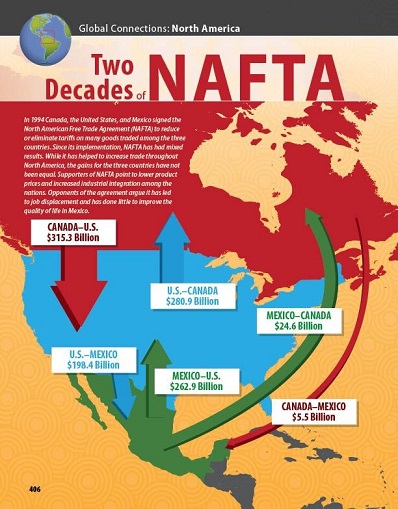 Until April 2017, US’ future in NAFTA was still unsure. Trump, after a conversation with the leaders of Mexico and Canada, promised to not withdraw from the agreement, yet. He said that US would re-negotiate the terms and conditions. If he concluded that the pact wasn’t fair after negotiations, he would end it.

The fourth round of negotiations began on October 11th between Mexico, Canada and the US. The negotiations are taking place in America. Up until now, Canadian Prime Minister Justin Trudeau has struck an optimistic note stating that a deal would be agreed upon. However, US President Donald Trump on Wednesday said that it was possible for the deal to die. He spoke to reporters while sitting next to Trudeau and noted, “It's possible we won't be able to make a deal, and it's possible that we will. I think Justin understands this, if we can't make a deal, it will be terminated, and that will be fine. They're going to do well and we're going to do well. But maybe that won't be necessary. But it has to be fair to both countries.” Trudeau had travelled to Washington to seek clarity for Trump. For the first time, he opened up the possibility that a deal may not be reached. He said, “We have to be ready for anything, and we are. We're taking this very seriously. I think Canadians are aware that the American administration, and the President, makes decisions that surprise people from time to time. And that is certainly something that we are very much aware of, and very braced for, and conscious of. We know that there is a certain level of unpredictability these days."

Trudeau also threatened the US that he would block his country’s armed forces from buying Boeing aircraft if the US presses ahead with plans to slap import tariffs of 300 percent on Bombardier planes.

During the meeting, Trump said that if NAFTA is terminated that he was open to a deal between Canada and the US, excluding Mexico in the process. Mexican foreign minister Luis Videgaray, has said that the termination of NAFTA will result in the deterioration of US-Mexico relations. This will be issues that the two countries cooperate on like countering drug-trafficking.

The fourth round is scheduled to take place over the course of one week. US is seeking to propose that a hefty percentage of cars being manufactured, which could derail the talks entirely. U.S. negotiators are also set to target Canada's supply-management system, which fixes prices for milk, eggs and poultry.

Our assessment is that this could possibly be the end of the road for the landmark agreement. US President Donald Trump has clearly signaled that if the terms and conditions are not in favor of America, then the deal would be terminated. We believe that the proposal would undermine the 1 trillion dollars in annual trilateral trade including a 'sunset' clause to force regular negotiation. We feel Trump’s singular focus on reducing trade deficit with Mexico could be detrimental as Mexico is the key partner of the United States in fighting drug trafficking. It is equally important to note the comments of Thomas Donohue, the President and CEO of US Chamber of Congress who has spoken against Trump’s stance on NAFTA twice in the last week.