The end of ISIS

Iran’s President Hassan Rouhani in an address broadcast in state media has declared the end of ISIS. The Islamic State of Iraq and the Levant also known as..

Iran’s President Hassan Rouhani in an address broadcast in state media has declared the end of ISIS.

In October 2016, the Iraqi army launched one of its most aggressive offensive against ISIS by besieging areas controlled by ISIS in regions surrounding Mosul. This offensive was called Operation We Are Coming, Nineveh. By the 1 November the forces entered the city of Mosul and began one of the biggest offenses against the militant group. By February 2017, the Iraqi army had recaptured western Mosul. Iran is an opponent of Islamic State of Iraq and the Levant (ISIL), fighting the group in Syria and Iraq. Iran's Quds Force is a "key player" in military intervention against the ISIL. ISIS no longer fully controls a major town or city after years of U.S.-led coalition and Russian airstrikes. 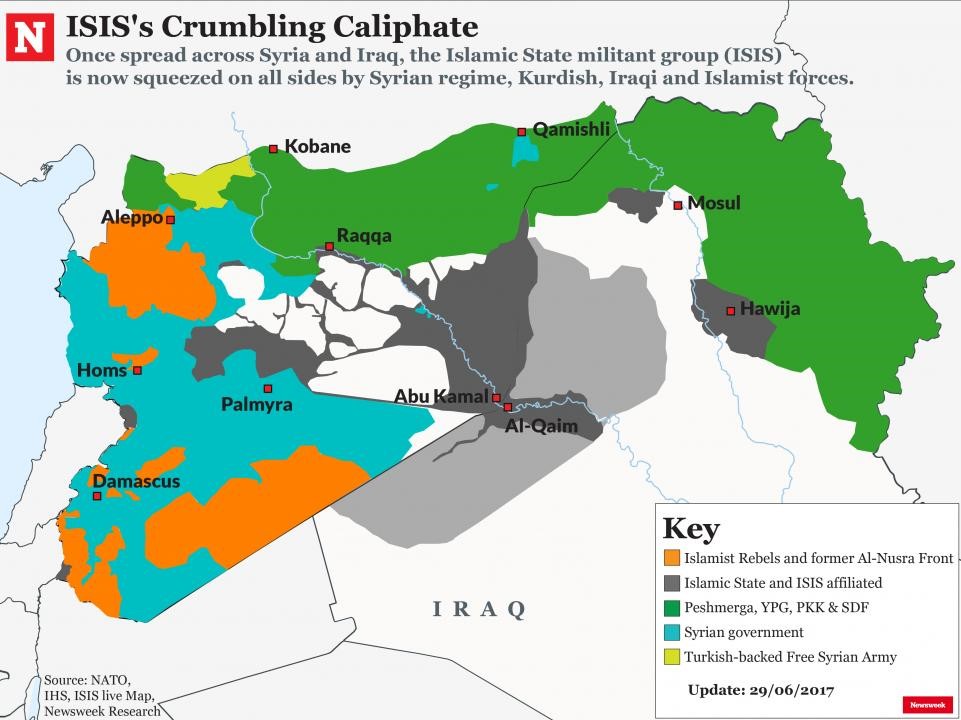 Iran’s President Hassan Rouhani in an address broadcast in state media has declared the end of ISIS.

He said, “Today with God’s guidance and the resistance of people in the region we can say that this evil has either been lifted from the head of the people or has been reduced. Of course, the remnants will continue but the foundation and roots have been destroyed.”

Speaking at the Fifth National Congress of the House of Farmers on Tuesday in Tehran, Rouhani said, "I thank all warriors of Islam, our diplomats, the government and the nation, as well as the Supreme Leader of the Islamic Revolution, armed forces and the Iraqi and Syrian nation for their efforts to put an end to a group that did not bring anything for us but evil, misery, destruction, murder and savagery. ISIS is a terrorist group that was fed and armed by major world powers and some reactionary countries of the region, outperforming historic criminals by their crimes," he continued.

Stating that the rooting out of ISIS terrorist group from Syria was very good news for the Iranian nation and the peoples of the region, he said: "The bulk of the work was done by the people and armies of Syria, Iraq and Lebanon and we helped them out of our religious and Islamic duty".

"What they plundered from Iraqi and Syrian museums were sold by the same world powers in the markets," said the President adding that they also sold the girls and women in these markets and committed crimes that surpassed the history of crime.

The senior commander of Iran’s elite Revolutionary Guards, Major General Qassem Soleimani also sent across a message to Iran’s Supreme Leader that ISIS had been defeated. More than a thousand members of the Guards, including senior commanders, have been killed in Syria and Iraq.

In 2017, ISIS has continued to lose territory and has hemorrhaged a lot of its funds. There were also rumors that Abu Bakr al-Baghdadi had been killed in a raid – the group later refuted it with a video featuring the ISIS leader.

Our assessment is that ISIS is down but not out. The jihadists may be losing their territorial bases, but their ideology has not been vanquished. The group might continue to propagate its hateful ideas through social media. They may now be additionally motivated to possibly rise the attacks on European soil. There is plenty of anecdotal evidence that battle-hardened fighters are returning to their European countries of origin. Where are they going?