An End to the Afghan Saga

Despite accusations of mismanaging the final chapter of the Afghanistan imbroglio, most Americans endorse the strategic decision to withdraw.

U.S. President Joe Biden finds himself caught in the eye of a political storm, following the messy withdrawal from Afghanistan, precipitated by the rapid advance of Taliban forces. Domestically, Accusations have been flying thick and fast from all quarters, calling for scapegoats to be held responsible, given the obvious failure in anticipating the course of events and taking timely corrective action. Large sections of the international community have also joined the chorus of criticism, expressing their diminishing confidence in the global stature of America. Equally relevant are the genuine concerns of countries like Taiwan and Ukraine, which may now be constrained to recalibrate their strategic postures.

Despite this simmering credibility crisis, however, there appears to be widespread support for the general policy of withdrawal amongst the domestic U.S. electorate. It remains to be seen how the White House factors this public opinion into its larger Middle East policy.

THROUGH A DOMESTIC PRISM

In the aftermath of the horrendous 9/11 attacks on American targets, there was overwhelming support for the military invasion of Afghanistan. As can be recalled, “smoke ‘em out their caves” was the common refrain during those times. However, this ardour rapidly cooled when it became clear that the ‘graveyard of empires’ had eminently lived up to its reputation. After Osama Bin Laden was liquidated in Pakistan, this anti-war sentiment crystallised even further, with the conflict now assuming the appearance of a never-ending grind.

Beginning with the Obama administration, popular opinion veered towards an exit from the "Afghanistan mess". This continued throughout the Trump and Biden regimes, eventually prompting the latter to expedite the withdrawal of U.S. troops by 31st August 2021.

Of course, the manner in which this drawdown was executed has been scathingly criticised by American observers. The mismanagement of evacuation procedures, along with a failure to plan for the rehabilitation of Afghan collaborators, has come under increasing scrutiny. For the Republicans, led by Mr Trump, the crisis has also come as an ideal stick to beat the current administration with.

It is no surprise, therefore, that President Biden's approval ratings on foreign policy have dropped by a few points. According to the CBS News/YouGov survey, conducted between August 18 and August 20, 44 per cent of Americans believe that the removal of U.S. troops from Afghanistan was executed 'very badly', while another 30 per cent believe that it was executed ‘somewhat badly’.

Notwithstanding this development, however, opinion polls indicate overwhelming support for the larger policy of U.S. withdrawal. For example, in an NBC News poll taken between August 14 and 17, 61 per cent of Americans opined that the war in Afghanistan was not worth fighting. As explained by analysts, a majority of them appear to have given up on the rather naïve notion that the U.S. military can mould a deeply fractious country into a stable democracy. The financial and opportunity costs of maintaining troops abroad have been deemed to be too exorbitant. Therefore, even though the chaotic nature of the exit has somewhat tempered the vociferous support for withdrawal, it continues to be the prevailing domestic sentiment.

Given this discernible exhaustion with fighting ‘forever wars’ in the Middle East and West Asia, the U.S. is unlikely to engage in massive power projections in the area. Irrespective of a backlash at the international level, it will not reverse the policy of disengaging from the region.

Indeed, the Biden administration is preparing to end its combat mission in Iraq by the end of this year, apart from disentangling itself from Riyadh’s involvement in Yemen. Of course, to prevent the spread of terrorist movements, it may continue to prioritise specific theatres within Iraq and Syria. The larger policy direction, however, is to cut its losses in the region and pivot to other strategic areas like Eurasia and the Indo-Pacific. Climate Change and the COVID-19 pandemic are other areas that will preoccupy the U.S. 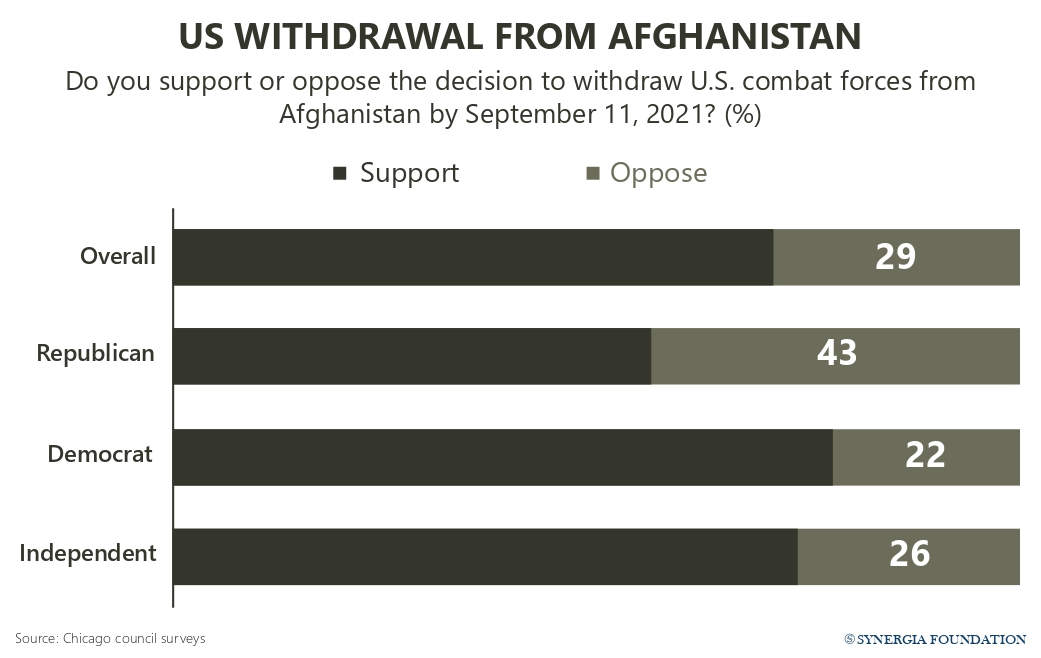 While this broader reorientation may be in line with domestic expectations, it is pertinent to note that the American population is divided on the strategy for combatting terrorism. For example, a Fox News poll in April 2021 had indicated that 50 per cent of the general public favoured the retention of some troops in Afghanistan to aid counterterrorism operations. Similarly, a Morning Consult/Politico poll in August 2021 had found that voters were less supportive of a withdrawal if the same could potentially create an opportunity for terrorist groups like Al Qaeda to establish operations in Afghanistan.

Against this backdrop, President Biden would be well-advised to take a deeper look before he withdraws post-haste from Iraq or abandons Afghanistan entirely to its fate, like it did the last time. He can ill-afford to repeat the mistakes made by previous administrations in places like Iraq, where the U.S. was forced to intervene for a second time to curb the rabid Islamic State movement.

Indeed, the recent bombings executed by the ISIS-Khorasan outside the Kabul airport should serve as a cautionary lesson for the U.S. administration. If terrorist entities do indeed make a comeback in Afghanistan under his watch, all the political capital that he has hitherto garnered will swiftly dissipate. In foreign policy matters, public memory is not just short but also highly fickle.