The Prime Minister of Papua New Guinea has declared an emergency in the Southern Highlands Province of the country, following riots last week.

The Independent State of Papua New Guinea is located in the South Pacific Ocean north off the coast of Australia and east of Indonesia. PNG makes up the eastern half of the island of New Guinea, which is the second largest island in the world at 785,753 kilometres square. It includes over 500 small islands, and has over 800 indigenous languages.

Archaeological evidence indicates that the island of New Guinea was first inhabited over 60,000 years ago during the Pleistocene period or Great Ice Age, by travellers from the Asian landmass. These were the Melanesian people. New Guinea and the Solomon Islands saw a second wave of migration 3,000 years ago. These inhabitants, the Polynesians, began trade with South America and Southeast Asia by the mid-16th century. The first recorded sighting of New Guinea by Europeans was in 1512 by Portuguese explorer Antonio d’Abreu. The Solomons and New Guinea became a centre for slave trade through the 1800s, during which time colonial powers also exploited the region’s sandalwood forests.

The island of New Guinea was divided into two in 1884 when Germany colonised the northernhalf. Britain formally annexed the southern region, which today makes up Papua New Guinea, four years later. British New Guinea was handed over to Australia in 1906 and renamed the Territory of Papua. It was impacted in both World War I, when Australian troops took over the northern half of the island, and in World War II, when Japanese troops made significant inroads into the region, controlling most of the Solomon Islands in early 1942. Papua was ruled by Australian administration until 1975.

Today, the country has a population of approximately 7 million. Tok Pisin is the most widely spoken language and Christianity is the most widely practiced religion. The current Prime Minister, Peter O’Neill, was chosen by the parliament in 2012. About 87 per cent of the population live in rural areas and are reliant on subsistence agriculture. 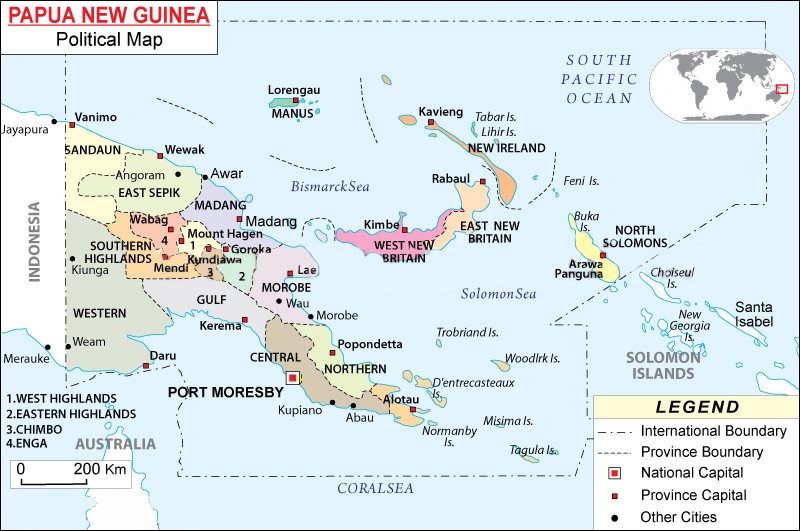 The government of Papua New Guinea has announced a nine-month state of emergency in the Southern Highlands Province of the country. The emergency will result in a suspension of the provincial government, and the deployment of police and military personnel in the Prime Minister’s home province. The state has approved approximately $ 1.8 million in funding for the emergency, and a curfew has been imposed in the provincial capital Mendi.

The announcement came hours of riots in the region, where protestors reportedly resorted to looting and arson. The outrage was the result of a decision taken by a court to dismiss a petition against the regional governor William Powi. The petition challenged the Governor’s 2017 election, which had taken place amidst allegations of vote rigging and corruption.

“The actions of reckless individuals damaging property in Mendi has disgusted the nation,” Prime Minister Peter O’Neill said in an official statement. “I have had enough of this nonsense that has been manipulated by people who would call themselves leaders. Police will investigate every agitator, and every person who was involved in the unrest we saw yesterday… The Southern Highlands Province has so much going for it, so many natural resources and agricultural potential. We will not let this potential be undermined by people who have failed in politics and want to cause disruption.”

PM O’Neill has seen his fair share of controversy. He survived a no-confidence vote in 2016 after corruption allegation and widespread dissent. He gained a second term in 2017 despite continued protests and accusations of vote-buying.

Unrest in Papua New Guinea is exacerbated by the country’s vulnerability to natural disasters. Located on the ring of fire, PNG has 16 active volcanoes of which six (Rabaul, Ulawun, Pago, Karkar, Manam, and Mount Lamington) are classified as high risk. The most recent earthquake that took place in February, had a magnitude of 7.5 on the Richter scale. The quake killed 100 people, and approximately 270,000 still require humanitarian aid. Aid has been hindered by security incidents such as the armed robbery of volunteers, according to the Red Cross. The World Bank has noted that PNG has high rates of crime and violence. The Bank stated that robbery, assaults, and homicide are “on the rise in known “hotspots” such as Lae and the National Capital District (NCD).”

Our assessment is that the recent riots were a result of pent-up anger against the government. We believe that the declaration of emergency is a major challenge for the state, which is already bearing the financial strain of humanitarian aid. As noted previously, the region is rich in natural resources including deep-sea mineral deposits. The successful exploitation of these deposits could potentially boost the country’s economy. However, such a strategy would also have to take into account ecological costs and other negative ramifications.