Economist Intelligence Unit’s (EIU) Annual Democracy Index provides a snapshot into the state of democracy around the world. This year’s dip in India's ranking has raised questions.

Started in 2006, the annual Democracy Index compiled by the prestigious EIU is studied by scholars around the world and countries use it to benchmark their progress in achieving full democratic status.

The study covers 165 countries and is based on five different criteria- electoral process and pluralism, civil liberties, government functioning, political participation, and political culture. Within these five categories, there are 60 different indicators that generate the final score based on their weighted average.  Actually, each of the indicators is a question with two or three permitted answers which are ‘ experts’ assessments.  In case public opinion polls have been conducted on any of the indicators, these are also taken into account.

India, the largest democracy in the world, has come down 10 ranks this year with the decline being in electoral process and pluralism, political participation and in civil liberties 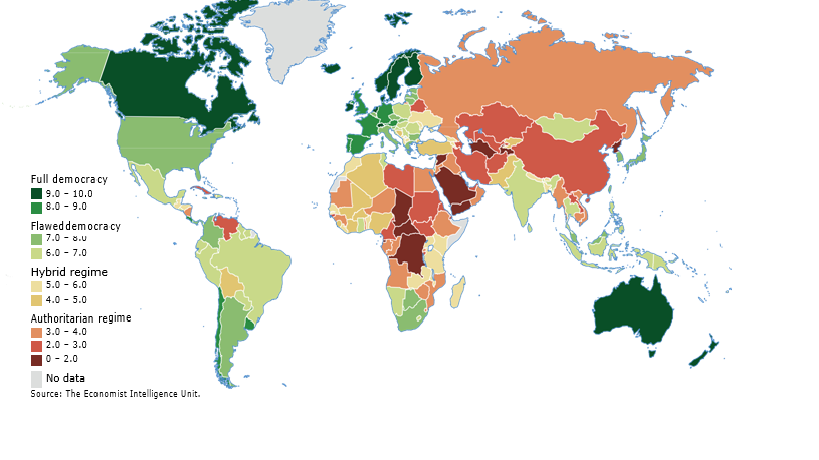 ‘Full Democracies’ are those countries where civil liberties and political freedom are maintained by thriving democratic practices, governments have a rigorous system of checks and balances, an independent legal system and independent media. Norway, Iceland, Sweden, and New Zealand top the list. Other full democracies are the UK, Germany, and France.

‘Flawed Democracies’ are countries where although the elections are free and fair and basic civil rights exist, there may be issues with media freedom, political culture, and government functioning. Both the US and India, have been included in this category.

It is clear that India’s lower rank is primarily due to the fall in civil liberties and political participation. The overall score of 6.9 is the lowest since the rankings were started in 2006.

The report has justified its score on the grounds of the CAA having “enraged the large Muslim population, stoked communal tensions and generated large protests in major cities”. It also cites the revocation of Article 370, the various security measures imposed including the information blackout and the NRC exercise of Assam.

India is the biggest and one of the most important democratic countries on earth. Indian democracy today is seventy-one years old and has survived despite many countries that have yielded to dictatorship and military rule. The success or failure of democracy means a lot for the future of democracy not only in India but in other countries as well.

While not an accepted benchmark by itself, the rankings do influence global opinion, especially that of large investors, who are checking all aspects of a countries economic viability and political stability before they risk their investments in that country. Since it is widely cited by journalists and by economic experts while preparing their predictions for a particular country, the rankings are important to that extent. Otherwise, they have no binding effects.