The European Central Bank has revealed that it has made nearly €8bn in profits from its holdings of Greek government debt. The financial crisis in Greece, called the Greek Depression..

The European Central Bank has revealed that it has made nearly €8bn in profits from its holdings of Greek government debt.

Financial crisis in Greece called the Greek depression occurred in the aftermath of the global economic collapse between 2007 and 2008. The genesis of the problem began in 2001 with the introduction of the Euro. It significantly reduced trade costs between Eurozone countries and consequentially Greece’s trade deficit increased. The country was consuming more than it was producing. By 2008-2009, its total deficit was 15%.  Major European Union countries like Germany began to withhold money lent to Greece because it was considered “high risk”. As a result, Greece couldn’t finance its debts.

Generally, when faced with such a crisis, countries allow their currency to depreciate to attract investment. Greece couldn’t do that because it remained in the Euro. The unemployment rate rocketed to 25%.

In 2010, the European Commission, European Central Bank (ECB) and International Monetary Fund (IMF) (the Troika) launched a €110 billion bailout to address the problem. However, the crisis has persisted.

Initially, Eurozone members said they would return interests of loans taken by Greece back to the Greek central bank. This was done in the spirit of EU solidarity. In 2015, the pay-back operation was halted when a second bail-out was rolled out. Germany has refused to re-initiate it since that time.

A European media platform called Euractiv has published a report noting that Germany has profited  €1.3 billion on account of interest.

What about Greek bonds?

A government bond is a debt security issued by a government to support government spending. Generally, these bonds are considered risk-free and are traded in highly liquid markets. In 2011, private bondholders of Greek bonds were hit with huge losses on Greek debt. In order to stem the crisis, European leaders announced a deal in which private investors would take a 50% writedown on the value of their holdings. However, by 2017, the market had rebounded to some extent. Greece was able to sell €3 billion ($3.5 billion) in five-year government bonds. Demand for the debt exceeded €6.5 billion and the nation had to turn away investors. This was considered a boost for the nation. However, experts state that the country is not in the clear yet. Much of most of Greece’s €300bn government debt is in the hands of international creditors.

European Central Bank is the central bank for the euro and administers monetary policy of Eurozone. It was established on 1 June 1998. 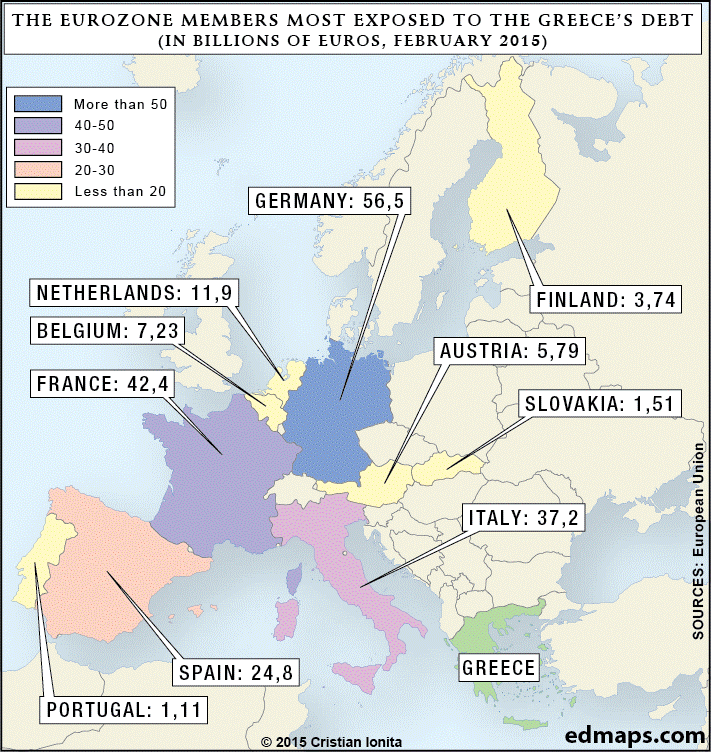 The European Central Bank has revealed that it was able to make nearly €8bn in profits from its holdings of Greek government debt. The bank provided a written response to a request from a Greek MP. The statement revealed that the bank had collected nearly €7.8 billion in interest payments between 2012-2016. These interest payments were on Greek sovereign bonds acquired under its Securities and Markets bond-buying program (SMP).

The SMP program was launched specifically to address the Eurozone crisis in 2010. It was re-worked to include Italian and Spanish government debts in 2011. The money that has been collected by ECB will be distributed amongst 19 eurozone central banks.

“This is a matter of national competence and falls outside the remit of the ECB”, said the central bank. The letter was signed by ECB President Mario Draghi and also stated, “Any future decisions on the transfer to the Greek State of amounts equivalent to the National Central Bank’s (NCB) income do not fall within the remit of the ECB or the NCBs, but rather that of the national governments of the euro area Member States.”

Our assessment is that the latest revelation will anger many within the Greek government. Last year, Finance Ministers in Eurozone had suggested returning the profits back to Greece as it is still under tremendous economic strain. Additionally, Greece is not part of ECB’s Quantitative easing (QE). ECB has maintained that Greece will only be included in the QE if the bank determines the Greek debt is more sustainable than it is today.