A massive quake & tsunami ravaged the Indonesian island of Sulawesi, leaving 384 dead and hundreds missing. Indonesia is a sovereign state in Southeast Asia, between the Indian and Pacific oceans. It is the world's largest island country, with more than thirteen thousand islands. With over 261...

A massive quake and tsunami ravaged the Indonesian island of Sulawesi, leaving 384 dead and hundreds missing.

Sulawesi is an island in Indonesia. One of the four Greater Sunda Islands, and the world's eleventh-largest island, it is situated east of Borneo, west of the Maluku Islands, and south of Mindanao and the Sulu Archipelago. Within Indonesia, only Sumatra, Borneo and Papua are larger in the territory, and only Java and Sumatra have larger populations. 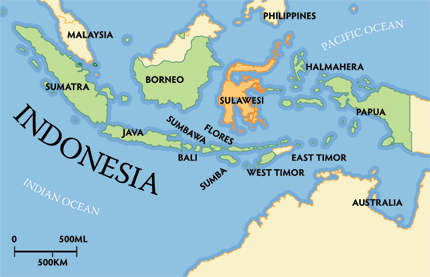 Hundreds have been killed on Indonesia’s Sulawesi island, which was struck by a 7.7-magnitude quake – triggering a tsunami that swept through two coastal towns. Scores of houses have been flattened, burying victims under rubble.

The disaster claimed the lives of some 384 people and left around 500 injured after the tsunami hit the coastline with 3-meter (10 foot) high waves, the spokesman of Indonesia’s National Disaster Mitigation Agency said on Saturday.

He added that the number of victims may further rise. The announced death toll only includes the data from Palu, but the casualties in nearby Donggala Regency are currently unknown. Harrowing images have come in showing the scale of destruction that the Sulawesi quake inflicted on the towns of Palu and Donggala, located close to the epicentre of the quake that wrought havoc on the island on Friday afternoon.

Palu airport has also been damaged, losing 500 meters of its 2,500-meter long runway. However, the authorities said the remaining length will be enough for Hercules cargo aircraft to land and bring essential supplies to the hard-hit region.

Our assessment is that Indonesia will require immediate humanitarian aid to facilitate any recovery operations in the island of Sulawesi. The Indonesian archipelago is constantly at risk of earthquakes, volcanic eruptions, floods and tsunamis, and therefore we believe that local administrations, as well as the Indonesian government, will be well prepared to tackle the challenge of rebuilding from the earthquake.