A 7.3 magnitude earthquake has struck the border region between Iraq and Iran, killing more than 330 people. So far, an estimated 2,530 injuries have been reported.

A 7.3 magnitude earthquake has struck the border region between Iraq and Iran, killing more than 330 people. So far, an estimated 2,530 injuries have been reported. The final tally is expected to rise.

Iran is one of the most seismically active countries in the world, being crossed by several major faults that cover at least 90% of the country. As a result, earthquakes in Iran occur often and are destructive. One of the largest and most destructive earthquakes that took place in Iran’s modern history was the Salmas earthquake that on May 7, 1930. It measured 7.1 on the moment magnitude scale and had a maximum Mercalli intensity of IX (Violent). A damaging foreshock occurred fifteen hours prior to the main event and served as a warning to the people that felt it strongly. Reports from seismologists and seismological organizations indicate that up to 3,000 fatalities may have occurred in western Iran and eastern Turkey.

In 1990, Iran was devastated by another powerful earthquake. The shock had a moment magnitude of 7.4 and a Mercalli Intensity of X (Extreme). There have been estimates that there was loss of life in the range of 35,000–50,000, with a further 60,000–105,000 that were injured. The National Geophysical Data Center estimated that $8 billion in damage occurred in the affected area.  In 2003, a 6.6 magnitude earthquake flattened the historic city of Bam in southeastern Iran, killing some 26,000 people.

In 2015, a domestically-built ‘strong motion accelerograph’ was unveiled at Tehran’s International Institute of Earthquake Engineering and Seismology (IIEES) on Sunday, after 5.5 years of research. Officials announced that the device can warn about seismic activity a few seconds before the tremors are felt. In the past decade, over 45 earthquakes that occurred in Iran were more than 5.5 on the Richter scale.  There are 350 fault lines in the country and each is over 20 km long. From 1900 to the first half of 2015, more than 54,000 quakes were registered in the country, with 351 quakes over 5.5 on the Richter scale. 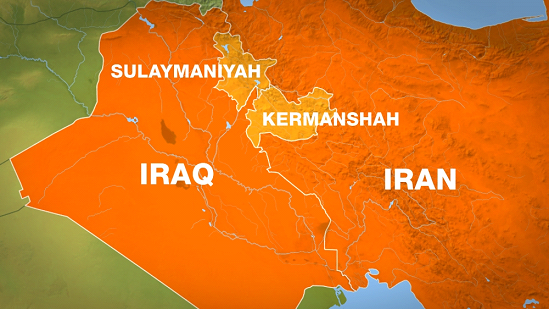 A 7.3 magnitude earthquake has struck the border region between Iraq and Iran, killing at least 328 people and injuring an estimated 2,530 more.

On its website, the USGS placed the quake's epicenter at about 18.6 miles southwest of the Iraqi city of Halabja. The USGS also issued an "orange" alert for "shaking-related fatalities and economic losses."  "Significant casualties and damage are likely and the disaster is potentially widespread," the agency said online. "Past orange alerts have required a regional or national level response.

Tremors from the earthquake were felt as far as Qatar. Much of the loss of life and damage has reportedly occurred in the Iranian city of Sarpol-e Zahab. Meanwhile, mosques in the city have been broadcasting prayers through loudspeakers. "I was sitting with my kids having dinner and suddenly the building was just dancing in the air," a Baghdad mother-of-three, Majida Ameer, told Reuters news agency. "I thought at first that it was a huge bomb. But then I heard everyone around me screaming: 'Earthquake!'"

In a further hit, the main hospital in the region has been damaged by the earthquake. Hence, the medical professionals have been struggling to treat patients. The head of Iran's Red Crescent Organisation, Morteza Salim said, “Some other villages have suffered power cuts and their telecommunications system has also been disturbed.”

At least 321 people were injured in the Iraqi side. “The situation there is very critical," said Kurdish Health Minister Rekawt Hama about Iraq.

Our assessment is that much of the damage occurs in Iran’s mountainous region occurs because many homes in the area are made of mud bricks. They are therefore, at risk of collapse in a significant earthquake. Given the large number of quakes in Iran, the importance of quake-resistant buildings can’t be overemphasized.