The drug war in Colombia

The single largest drug bust in the history of Colombia took place in November 2017. The nation’s police have reported seized more than 12 tonnes of cocaine..

The single largest drug bust in the history of Colombia took place in November 2017. The nation’s police have reported seized more than 12 tonnes of cocaine.

It has been linked to the Gulf Clan, which is one of the most powerful drug cartels in the country.

Colombia is one of the world’s leading producers of cocaine, with output of around 910 tonnes per year, according to the US Drug Enforcement Administration. Anti-drug police have confiscated 362 tonnes of cocaine this year. Colombia has had four major drug trafficking cartels and several bandas criminales, or BACRIMs which eventually created a new social class and influenced several aspects of Colombian culture and politics. The Colombian government efforts to reduce the influence of drug-related criminal organizations is one of the origins of the Colombian conflict. Since the 1960s, it was an ongoing low-intensity war among rival narcoparamilitary groups, guerrillas and drug cartels fighting each other to increase their influence and against the Colombian government that struggles to stop them.

Since 2002, the country has been making significant progress towards improving security. It is the fourth largest country in South America and one of the continent's most populous nations, Colombia has substantial oil reserves and is a major producer of gold, silver, emeralds, platinum and coal. It is also fourth largest economy in Latin America and the second largest economy in Middle America measured by gross domestic product. Colombia over the last decade has experienced a historic economic boom. 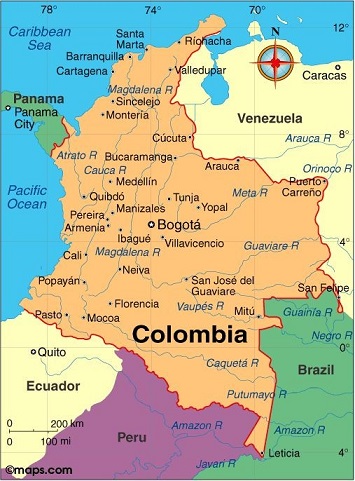 The single largest drug bust in the history of Colombia took place in November 2017. The nation’s police have reported seized more than 12 tonnes of cocaine. "Thanks to a police operation with overseas intelligence, from friendly countries, the largest seizure in history was made," said the President of Colombia, Juan Manuel Santos. He was at the police base where the cocaine was put on display.

Santos stated the drugs that were seized by the authorities would be valued at $360 million in the US market. The drugs were reportedly found under in four banana plantations in the north of the country. The location where the drugs were found is close to the routes often used to smuggle cocaine to the United States. The drugs have been linked back to the Gulf Clan. They reportedly belong to Dairo Úsuga, who is also called as Otoniel. He is considered the leader of the Gulf Clan – the most powerful drug cartel in the nation. However, there have been indications that the power wielded by the Gulf Clan and other cartels is reducing in the recent years. They were once considered untouchable. In September 2017, leaders of the Gulf Clan notified that they were ready to submit to justice. President Juan Manuel Santos said that he had authorised justice officials to look at the request. Santos said, “I have told them they are criminals who, if they hand themselves over, the law will give them some privileges depending on what they deliver and the value to society of what they deliver.”

According to authorities a few months ago, the second in command of the Gulf Clan was killed and many members of the organization have been arrested. The President will end his term next year and has made tackling the nation’s illegal drug trade one of his main agendas.

Our assessment is that one of the most powerful drug cartel in Latin America is losing its grips to power. The government had initiated intense operations for the past two years entirely focused on the Gulf Clan. More than 1,500 members working for the cartel have already been arrested. The latest development will further weaken one of the main organizations that has been involved in illegal trafficking in the country and beyond (especially to the US).