Centuries of evolution have changed much of human life except for certain traits like socialising. Humans are ingrained to be social animals. History has taught us that when humans are denied access to socialising with each other, revolts eventually emerge, toppling those in power. The ongoing COVID-containment measures taken in China are an excellent example of what happens when you prevent people from socialising.

In a country like China, where compliance is mandatory, and dissent is unheard of, one might assume that there is little to no scope for protests and revolutions; and they’d be right. However, recent demonstrations in major cities have signalled a change in the public’s mentality toward the state. Multiple anti-government and anti-lockdown protests have emerged, showcasing the pent-up frustration of the public. The anti-government protests have targeted the government’s censorship policies and the authoritarian rule of President Xi Jinping. On the other hand, the anti-lockdown protests have been focused on forcing the government to retract its zero-COVID policy.

China was mired in controversy during the COVID-19 outbreak in 2020. The Middle Kingdom was unanimously cited as the epicentre of the virus by the West. Cases in China were skyrocketing after an outbreak in the Wuhan province. To prevent bad press, the Chinese government enforced draconian lockdown measures through its zero-COVID policy to curb the spread of the virus. The policy worked. Cases in the country started to witness a steep decline, and recovery rates started increasing with mandatory vaccination drives. However, the policy was too restrictive that when it was implemented, around 11 million residents in Wuhan were cut off from the rest of the country and forced to stay indoors indefinitely.

The zero-COVID policy was later implemented in other parts of the country. The government relaxed certain restrictions in 2021 and allowed factories to work at full capacity. The travel and lockdown restrictions continued to remain, though. Though public dissent towards the policy was minimal initially, things started to change with the rest of the world relaxing their COVID restrictions. When the government continued carrying mass tests, using contract tracing applications, and quarantining infected individuals in packed quarantine facilities, public perception of the policy changed. Protests emerged in Shanghai in March after food shortages and tiresome Covid restrictions pushed residents to oppose lockdown measures.

Similarly, in October, ahead of the government’s annual meeting, protests were held in Beijing against the zero-COVID policy. Though these incidents had sizeable support, they were still sporadic, limited only to their particular localities. The recent protests, however, are different.

The ongoing protests emerged after a fire broke out in an apartment in Xinjiang's capital Urumqi in late November. The incident killed ten people. The public was furious at the response from local firefighters and law enforcement agencies, citing that COVID protocols affected their response time. As a result, protests emerged in the city against the government’s inability to save lives while using most of its resources to implement lockdowns. Protests eventually grew to other parts of the country, manifesting into anti-Xi, anti-lockdown, and anti-government demonstrations. 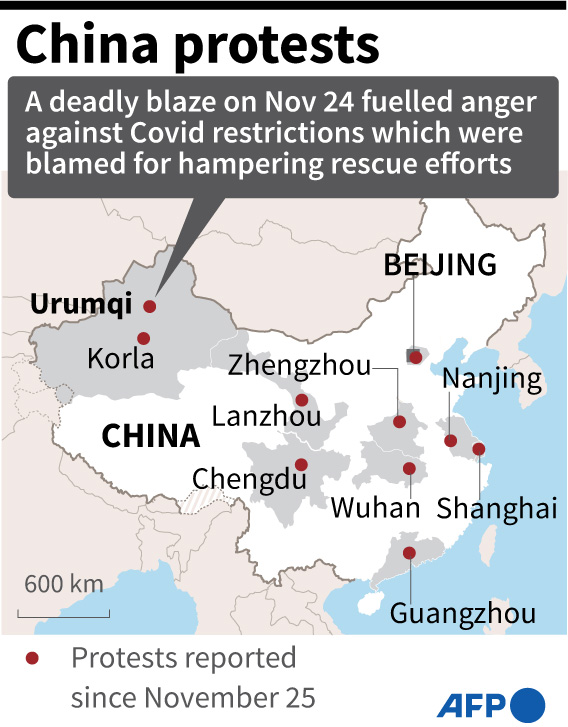 Though all the recent protests have manifested into anti-COVID and anti-government protests, they started with localised issues. For example, regular power cuts forced the students at Wuhan University to protest on the 19th of September. The protests eventually turned into anti-lockdown protests. Similarly, the detention and mistreatment of COVID-positive citizens raised concerns in Shanghai and Guizhou, leading to protests. In a truly authoritarian fashion, the government quelled these protests with an iron fist. Since their needs were not met and their demands were not heard, protestors were more than ready to partake in a larger movement against the government and its policies.

The ongoing protests have also exacerbated the supply chain issues that have plagued the country since the advent of the pandemic. Initially, China faced trade from external actors like the US, forcing it to cut down on production. But now, the country faces internal socio-economic unrest, pushing it to concentrate more on domestic issues. The Foxconn plant incident perfectly summarises issues with supply chains and policy implementation. When hundreds of workers were locked in the Foxconn plant in Zhengzhou after an outbreak in October, it halted the manufacturing of Apple products from the plant. The halt is expected to affect iPhone production by cutting down 6-8 million units. Workers in the plant eventually broke out and ran for their freedom due to the unrealistic demands of the zero-COVID policy that fails to be humanitarian on many counts.

Finally, the ongoing nationwide protests showcase the power of information. A state like China censors its media and the internet for two main reasons. One is to control the population, and the other is to prevent any external interference in their domestic politics. The government does not want its citizens to gain knowledge from the outside world since it could potentially point out the flaws in its system. However, the government can't censor every bit of information entering the country. The ongoing FIFA matches are a good example of this. Chinese citizens were furious after watching people from other countries enjoy matches in Qatar without mask mandates and social distancing norms. The Chinese government tried censoring the matches by cutting the parts that showed the audience, but the damage had already been done. The public understood that the rest of the world had moved on to normalcy. No matter how much more suppression takes place, the urge to socialise and return to normalcy will be embedded in the minds of the public.