Dow on the rise?

For the first time in its 121-year history, Dow Jones Industrial Average broke the 22,000 barrier. The milestone was hit partly ..

For the first time in its 121-year history, Dow Jones Industrial Average broke the 22,000 barrier.

The milestone was hit partly due to the better-than-expected third quarter results posted by Apple.

Dow is a stock market index. It, along with other stock market indexes, goes through periods of general increase or general decline. A period when there is an increase is referred to as the bull market and when there is decline, it is called a bear market. There are also phases of stagnation. The first period of bull market experienced by Dow was between 1885 and 1890. It reached its peak of 78.38 on June 4, 1890. Almost immediately, the index experienced a bear market and Dow plunged up to 63% in a period of six years. 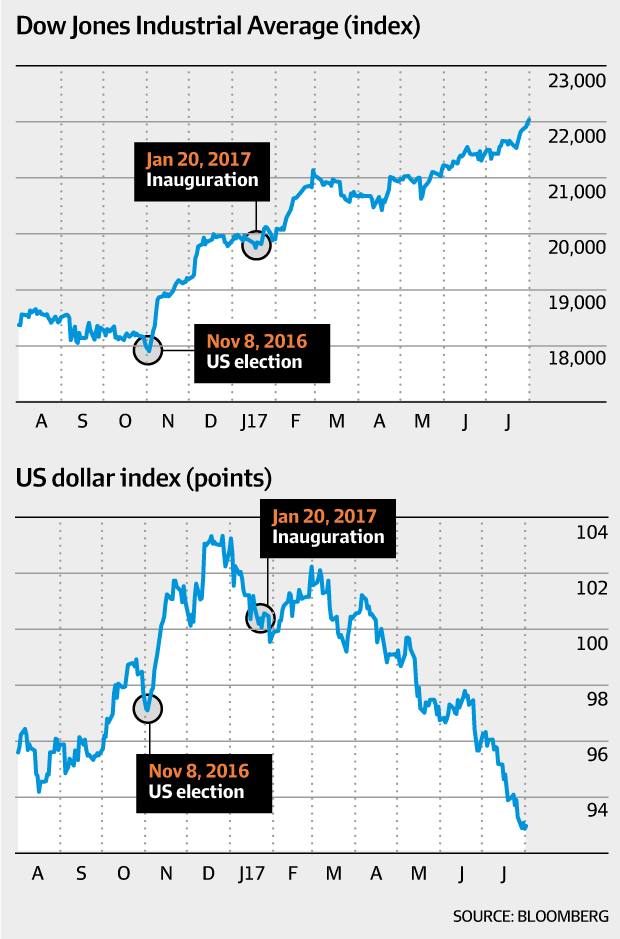 The stock market on August 2, 2017, was buoyed by Apple’s robust third quarter results. Tim Cook, Apple’s CEO in a statement said, “With revenue up 7 percent year-over-year, we’re happy to report our third consecutive quarter of accelerating growth and an all-time quarterly record for Services revenue.” The results were better than what experts had forecast for the company.  Apple stocks rose as a result of this and this was reflected when the market closed.

In 2017, the market gains have occurred even though economically US is forecast to have less than expected growth. Traders have reportedly shrugged off the data and focused on strong earnings growth. Low inflation and rising global growth could also be attributed to the longevity of this bull market.

US President Donald Trump has often bragged about the robust performance of the stock market since he assumed office. However, this is breaking with precedent. Stock markets follow a cyclical 10-year pattern. According to experts, nearly every American president in the past 70 years has eventually encountered a stock market storm.

Our assessment is that despite this unprecedented growth, fears are starting to emerge about valuations of the companies being stretched. It is quite possible that there might be a stock market “bubble” that will burst soon. We believe that financial markets have followed a 10-year cycle and the world has seen significant meltdowns in 1997 and 2007. So, 2017 is a year to de-risk as there are many geopolitical risks.