Just hours before US President Donald Trump was set to delivery his first State of the Union speech, the Dow Jones suffered a dramatic drop as it lost nearly 400 points..

Just hours before US President Donald Trump was set to delivery his first State of the Union speech, the Dow Jones suffered a dramatic drop as it lost nearly 400 points. The Dow has lost 540 points in two days.

This was the worst performance since September 2016.

In 2017, the stock market both in the US and globally performed robustly. Technology companies have also played a crucial role in sustaining the bull market as stocks for companies like Apple, Amazon and Google have consistently risen in 2017. Apple stocks specifically rose by 1.4% to a record high amid good reviews for its new iPhone product (iPhone X). S&P also noted that more than half of the index's gains were driven by just five stocks — the tech giants Facebook, Amazon, Apple, Google and Microsoft.

In December 2017, the Dow Jones index rose above 25,000 points, which at that point was a historic high for the stock market. The trend has continued in 2018 as well. Within the span of just 12 days, the US stock market has astronomically risen and topped at 26,000. 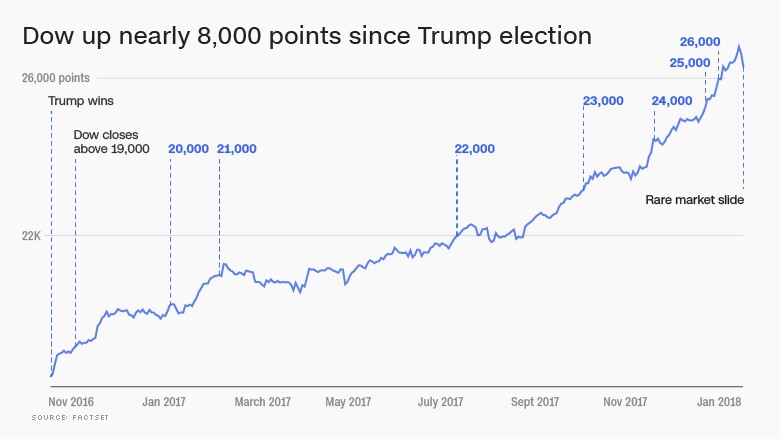 The US stock market rose by an unprecedented 1,000 points in just 12 days. This immediately led to investor fears of a bubble and an imminent crash. At the time, Ed Yardeni, president of investment advisory Yardeni Research told his clients that the market was in a “melt up”. "I'm not a big fan of melt-ups," Yardeni wrote. "They tend to be followed by meltdowns."

Just hours before US President Donald Trump was set to delivery his first State of the Union speech, the Dow Jones suffered a dramatic drop as it lost nearly 400 points. This is the steepest fall the stock market index had witnessed since September 2016. This was the second day of the stock market losing points. The fall is due to health-related stocks tumbling after Amazon, Chase, and Berkshire Hathaway announced a joint health care initiative. Investors now believe that this initiative will be a blow to the pharmaceutical industry. The DJIA closed down 362.59 points or around 1.37 percent. UnitedHealth Group and Pfizer were the two biggest losers. The S&P 500 index closed down 31 points, or around 1.09 percent.

"We've had a unilateral move higher [in stocks] to start things off and people are realizing this is not sustainable," said Art Hogan, chief market strategist at B. Riley FBR. "You're also seeing some cracks in the global story with interest rates rising."

Another reason why the Dow is performing badly is also due to Wall Street fears that the Bond market has been selling off lately. That's raising fears that the era of extremely low bond rates -- which has been very good to the stock market -- could soon be over.

Robert Pavlik, chief investment strategist at SlateStone Wealth, said he does not think this is the start of a major pullback. "I think people are looking for an excuse to sell," he said. "This is the first wave of selling we've seen in a while." Pavlik added this selling pressure could present a buying opportunity for investors who have cash on the sidelines.

Our assessment is that this is a long overdue serious correction of the stock market which has been rising to unprecedented highs in 2017 and early 2018. There is another reason why investors have exercised caution – they are waiting to see what the US Federal Reserve will announce at the end of its two day meeting taking place in Washington. It might signal that the interest rates might rise again.