DOES INDIA NEED THE NSG MEMBERSHIP?

The recent statement made by India's External Affairs Minister S. Jaishankar that hinted at some progress on India’s long-standing desire to join the Nuclear Suppliers Group (NSG) was greeted with much fanfare. The minister indicated that after overcoming some "political impediments" India could be admitted into the NSG.

The reality is that the supply chain for its nuclear power plants was more or less secured in 2008 when through a much-acclaimed diplomatic move, India was able to secure from the U.S. a one-time waiver for civil nuclear trade. This has given it access not only to nuclear fuel but also technology, albeit only for peaceful purposes.

The recently formulated draft proposal for giving credence to the new members of the Nuclear Suppliers Group increases India’s chances of entry into NSG. Such a move will be a great development for a growing power like India, as NSG membership would definitely magnify the economic and strategic development in the future. But there is one obstacle; China has been opposing India's membership in the NSG since 2016, because of which its application remains in cold storage.

India’s vigorous bid for the NSG membership during the NSG plenary in Seoul in 2016 came out a damp squib. Despite a campaign that spread over four capitals- Beijing, Tashkent, Seoul and New Delhi and a face-to-face meeting between Mr Modi and President Xi Jinping, nothing much came out due to Chinese intransigence.

However, India continues to hope that with U.S. support to make China relent, India could break into the NSG.

The non-Proliferation Treaty (NPT) is an international treaty which came into force in 1970 with the specific objective of preventing the spread of nuclear weapons and weapon technology. Signatories to the Non-Proliferation Treaty (NPT) felt a need to apply further safeguards on exports of nuclear and specialised nuclear equipment to non-nuclear-weapon states. This feeling was further heightened by India’s 1974 "peaceful" nuclear test, which arguably demonstrated that certain non-weapons specific technology could be turned into weapons development.

As a result, NSG was created in 1974 primarily with the U.S. as the main force behind it. NSG is a non-legally binding association of 48 major countries dealing with fissile material and possessing nuclear technology. The bloc combines to prevent nuclear exports for commercial and peaceful purposes from being used to make nuclear weapons. 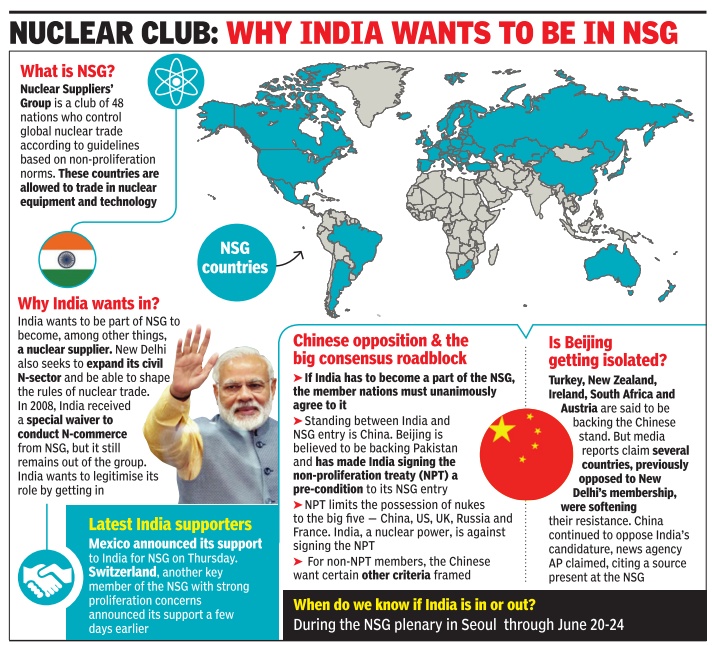 The current guidelines of NSG state that a non-NPT state cannot become a member of NSG, which keeps India out of the group. India repudiated the NPT because the NPT defines nuclear weapons states as those that tested devices before 1967, and as per the definition, India cannot be designated as a nuclear-weapon state.

India anticipates joining the Nuclear Suppliers Group by overcoming political impediments. A potential member is gauged on its proliferation record for national export controls and adherence to international nonproliferation treaties and agreements. India has credentials of a responsible actor as, over the years, it has shown adherence to International Atomic Energy Agency (IAEA) safeguards. It has taken discretionary measures to abide by NPT and NSG guidelines. Following the Indo-US nuclear deal of 2008, the U.S. lobbied hard for an exception for India, citing the country's impeccable record.

India's membership in MTCR (Missile Technology Control Regime (MTCR), Australia Group and Wassenaar Arrangement are significant evidence for India to be a part of NSG. Since encouraging international sanctions and limits on exports by conducting nuclear tests in 1998, India has been eager to obtain legitimacy as a nuclear power. Joining the NSG will give India better access to low-cost, clean energy-important for its economic growth. It will let India cut its emissions and bring down air pollution from coal-fired power plants. In fact, last year, India's Sherpa Mr Piyush Goel for the G20 had stated publicly that if the world wanted India to achieve climate targets, granting NSG membership was critical. "If India's technology is replaced from coal, to perhaps nuclear, then membership of NSG will open the doors for an adequate availability of raw material for nuclear supply to India’s nuclear power plants,” Mr Goel has emphasised.

NSG membership would put India on an unyielding footing to propose the idea of plutonium trade for its thorium programme that has been holding back in the wings. China is stridently combatant of India's NSG bid primarily on the grounds that New Delhi is not a signatory to the NPT. While a majority of the 48-member group backed India's membership, China, along with a few other countries (Turkey, South Africa, Ireland, and New Zealand), have opposed India's inclusion in the NSG. China's resistance is to ease the entry of Pakistan into the NSG.

China has even contended that if India can be let in without signing NPT, then Pakistan should be granted membership as well. However, the track record of Pakistan is not good. The U.S. in 2018, sanctioned seven Pakistan-led nuclear firms for nuclear proliferation. Since NSG works on the basis of consensus, China’s opposition is making it difficult for India to gain entry.

Yet another contrary view is that India should not humble itself by time and again canvassing with China and other countries for the membership. The 2008 waiver is good enough to continue with an uninterrupted supply of fuel for our operational reactors. The Indian Atomic Energy Commission has repeatedly assured that Indian nuclear technology can live without the NSG; in any case, even with the membership, no country is going to share its cutting-edge nuclear technology with India. Furthermore, in the new geopolitical alignments being created after the Ukrainian war, U.S. support to India on the NSG issue may not be as forthcoming as it was in 2008.