The Chinese navy commenced a three-day drill near its main submarine base as another exercise finished nearby. This was seen to be a message to the United..

The Chinese navy commenced a three-day drill near its main submarine base as another exercise finished nearby. This was seen to be a message to the United States that China is capable of defending its core interests.

The South China Sea is at the heart of a land and water dispute between China, the United States, and many Southeast Asian nations. China’s claim to the region is historic going back to the Xia and Han dynasties. The US has maintained that region as part of the international waters. Other countries that are involved in the South China Sea dispute include Malaysia, Indonesia, the Philippines, and Vietnam. Vietnam has become the most vocal critic of China’s claims to the sea.

One of the reasons why the South China Sea is so vital to these countries is due to the strategic advantage it provides. If China had complete control of the region, then it would be able to control a major trade route. It would be able to disrupt trade shipments that pass through this region to East and Southeast Asia. Currently, US$5.3 trillion worth of trade passes through the South China Sea.

The Chinese navy’s drill near its main submarine base triggered dispute with United States. China’s goal was to emphasize on its core interests in the region. The issue arose when an American strike group led by the aircraft carrier USS Theodore Roosevelt began its own exercises in the disputed waters of the South China Sea.

The most recent Chinese drill began in the waters off Sanya, which is Asia’s largest submarine base, on the south coast of Hainan province. The drilling overlapped with an unparalleled series of live-fire drills, over the period of a week, involving the aircraft carrier Liaoning to the east of the island, near the venue for the Boao Forum for Asia.

The region has various underwater channels and straits allowing China’s submarine fleet to break through the United States’ island-chain barriers. These barriers were primarily built to confine China’s maritime forces. 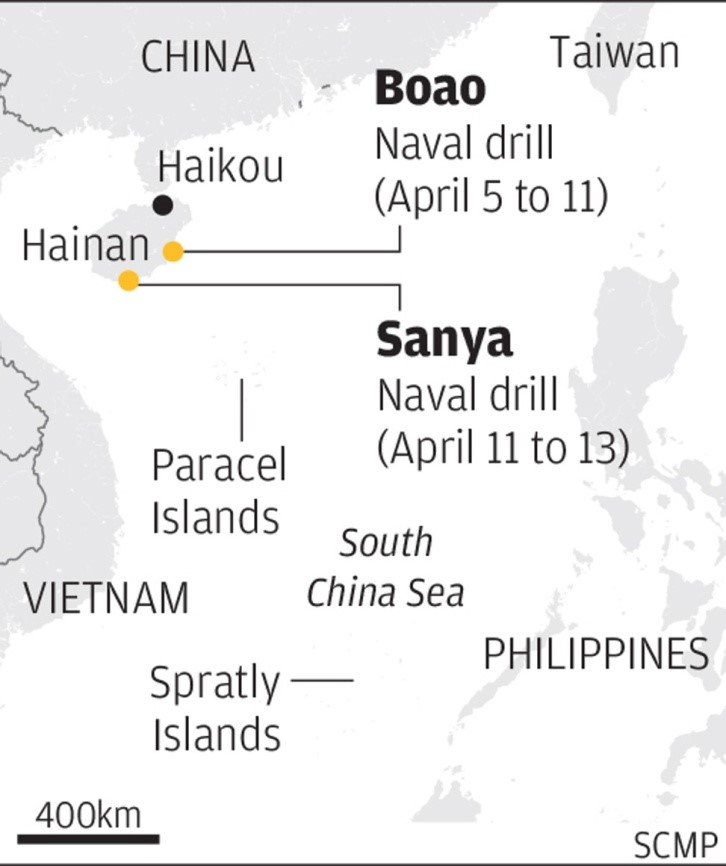 Chinese naval expert Li Jie stated that this drill was a sign that China was sending a message to the United States that its armed forces were ready to challenge any security challenges. He stated, “Hainan is the starting point for China’s ‘Belt and Road Initiative,’ while the South China Sea has the most important strategic sea waters for China to project its maritime presence and influence. Beijing wants to tell Washington that the Chinese navy is capable of defending the waters relating to its core national interests.”

The USS Theodore Roosevelt staged a routine training exercise on the way to the Philippines. Additionally, a small group of reporters were invited to watch 20 F-18 Super Hornet Fighter jets performing a take-off and landing exercise.

Strike group commander Rear Admiral Steve Koehler said that “We have seen Chinese ships around us. They are one of the navies that operate in the South China Sea, but I would tell you that we have seen nothing but professional work out of the ships we have encountered.”

A former member of China’s Second Artillery Corps, Song Zhongping, said the drills were conducted in a less sensitive area than the South China Sea, where China had several territorial disputes with its neighbors including the Philippines.

Last year, two deadly collisions took place in the region involving US warships and navies of China and other Southeast Asian countries. After this incident, they have been working on a code for unexpected encounters at sea.

Our assessment is that the ongoing South China Sea dispute is unlikely to be resolved in the near-term. The most recent drilling concerns all Asian countries about Chinese and US military displays in the area although it is believed that China’s drilling is in accordance with international law. Nevertheless, we believe that other countries should regard China’s drills as regular training for defensive purposes. Additionally, we feel that due to the strategic importance of the region, the drills represent China’s ambition in attaining complete control over the South China Sea by exhibiting its military muscle to others involved in the territorial disputes.