Technology has disrupted the traditional model of news production by empowering the audience to amplify it or create new content altogether.

Traditional news media has always operated on the three-tier model – production, distribution & discovery, and audience. This model of distribution has now changed; the citizen can now boost content by making it go viral. Meanwhile, distribution is free since we don't pay as much to spread information. Instead the cost of discovery has gotten higher. Content goes viral because citizens amplify it, and discovery mechanisms then push it further. Citizens can not only influence action in the world, but can produce it, which creates this new dimension. 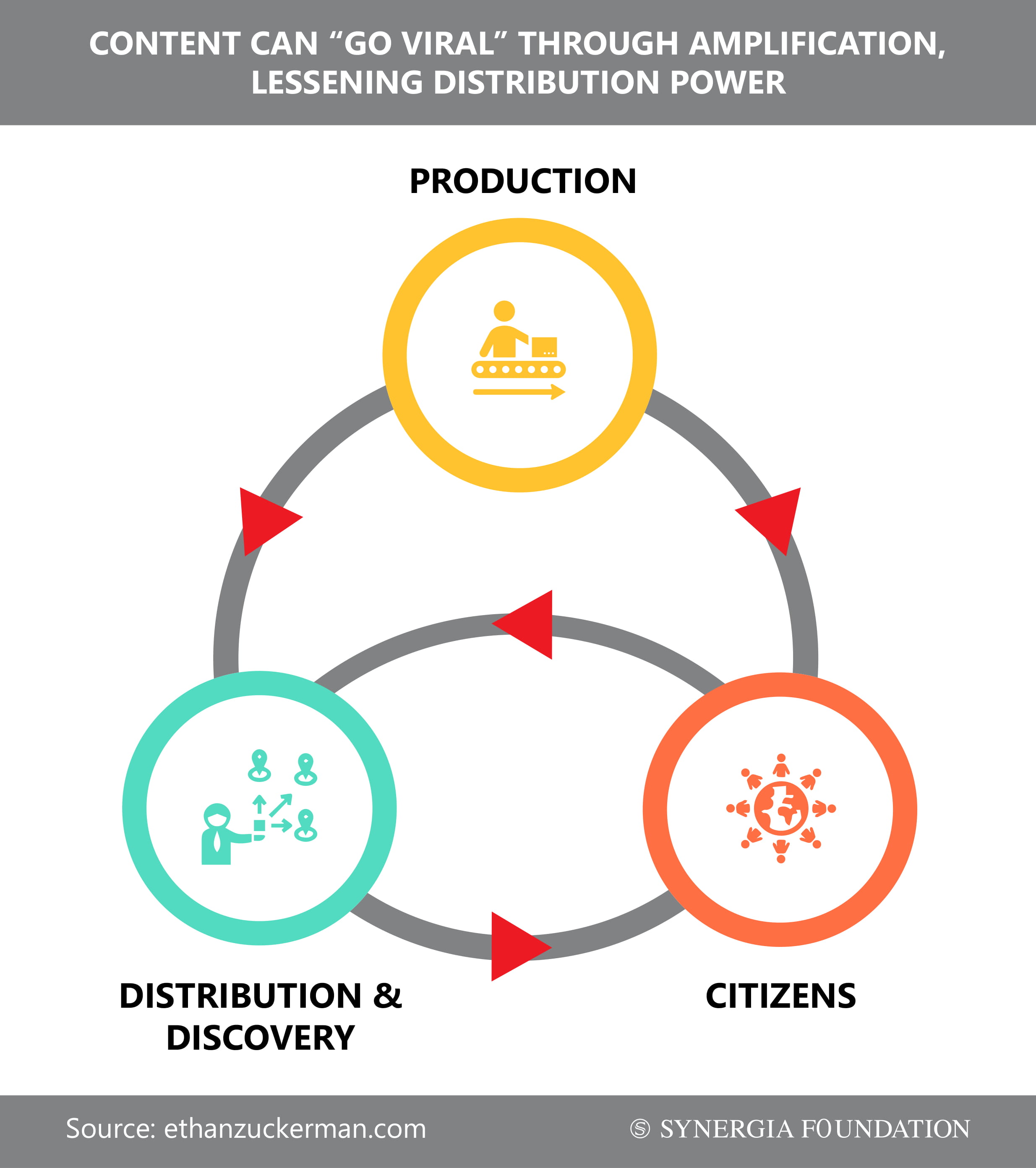 Tristan Harris, a Silicon Valley entrepreneur in the U.S., has argued that this new model is not a healthy trend and wastes people’s valuable time. Rather, it focuses on making more money the more time one spends on these platforms, making it addictive for all those involved. When a user accesses certain kinds of data and likes it (thereby boosting it), more of such data is made available to them, thereby trapping them in this cycle of viewership and interaction. 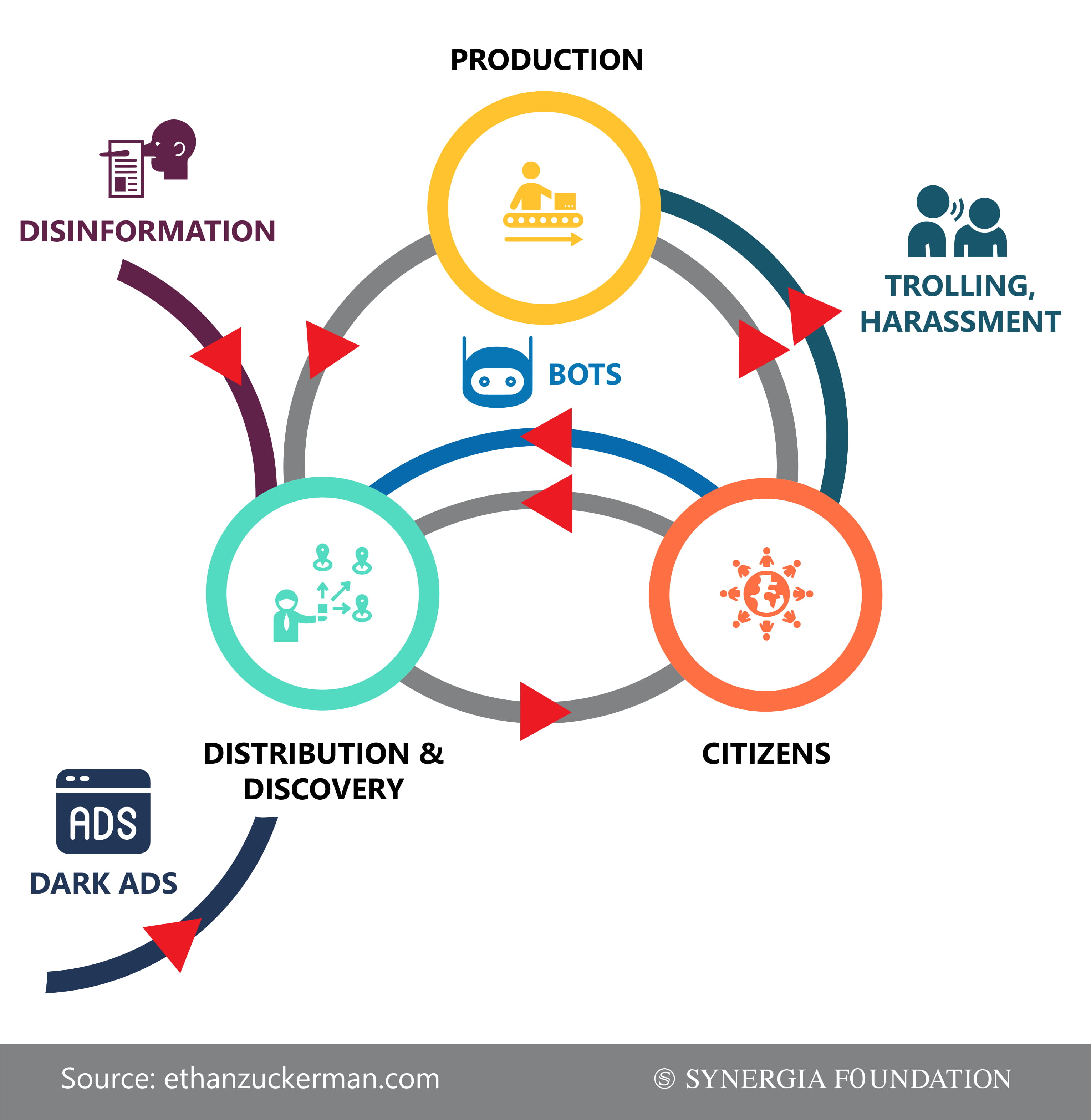 When ones detaches the costly production model from the model of distribution (where one makes money through advertising) the model does not fare well. In the U.S., newspapers drive substantial reporting. However, their revenues have gone down and the incomes of companies that help disseminate information, like Google, have gone up. There has been a shift away from producing reports into digital AdSense – a programme that helps users earn money from their online content. In an ideal situation, one cost would not replace the other.

The price of advertising in the current system of digital media is prone to abuse. It can be seized by people to spread disinformation, indulge in trolling, and use bots to artificially amplify content. The current system has given rise to echo chambers. To offset this, money must be spent on moderation and control measures so that a mob mentality does not predominate these spaces.

Around 60 years ago, under similar circumstances, the U.S. television sphere was failing, where low-quality content dominated. People then began investing in a public media system (the public broadcast system) to complement the private media industry.

Now once again, the U.S. is at a point where there is a need to build public social media which tries to address the relationship between news and social media. It would entail thousands of small networks with an explicit public spirit, and the people who use it would be responsible for it. The idea is to have a single tool that allows someone to use all media platforms. An American economist, Paul Romer, said that if we, as a society, are worried about surveillant advertising on social media, we should impose a levy on such ads. The levy can then be invested to build and maintain a better information ecosystem.

Mr Zuckerman’s work revolves around a Digital Public Infrastructure. The aim is to create a new pro-social social media to re-work the relationship between social media platforms and news organisations.

The process of combating disinformation needs to be backed by technical expertise and information. While companies like Facebook shouldn't be able to access WhatsApp (since it is an encrypted platform), the disinformation could be offset by journalists who are present in these systems. Media platforms themselves should get more aggressive about fact-checking. People are now learning to exploit the new environment of digital public infrastructure, to the extent that it is no longer an information problem, at least in the U.S. A major political party in the U.S. sought to detach itself from reality, since it was more advantageous, by claiming the need to overturn an election. This has now turned into a political problem which is hard to fix solely through an information approach.

There is a sense of wanting to throw away the old infrastructure due to lack of faith in it, resulting in a particular brand of political propaganda. Yet it is hard to answer which creates what – does the propaganda create the algorithm, or vice versa? A lot of this can be seen in the U.S. and Europe, but less so in Asia – Taiwan is currently seeing an uptick in trust. It’s hard to blame this mistrust on social media; it's more of a social shift where when institutions fail the people, the people get better at talking about it. Perhaps the conversations should now be not focused on how we survive as the press, but how we are failing the audiences, and what they are saying about the things we need to change.

Ethan Zuckerman is Director of the Centre for Civic Media at MIT and an Associate Professor of the Practice at the MIT Media Lab in the United States. He co-founded the international blogging community ‘Global Voices’. This article takes off from his thoughts shared at a Synergia Forum titled ‘Searching for news in a social media algorithm’ held on 26 February 2021.