The West African state of Mali faces problems of insurgency and terrorism, and the northern region of the country is highly turbulent. In addition to this, Amnesty International has reported findings that may suggest extrajudicial killing by the military.

The Mali Empire (1250-1650) was a power that controlled a large proportion of regional gold trade and greatly influenced culture in the region. Mali was colonised by France in 1898 (then called French Sudan). The country gained independence in 1960.

Today, Mali is a land-locked nation in West Africa bordered by seven countries: Algeria, Niger, Burkina Faso, Ivory Coast, Guinea, Senegal, and Mauritania. Mali is among the 25 poorest countries in the world, dependant on gold mining and agricultural exports. The eighth-largest country in Africa by landmass, it has a population of approximately 17.8 million. 80% of the population is engaged in agriculture and related industries. Mali has numerous ethnic groups and languages. Bambara is the most populous ethnic group (34.1%), while French is the official language. 94.8% of the country is Muslim.

Post-independence, Mali struggled with rebellions and droughts. The first democratic elections were held in 1992, after the end of a 23-year military dictatorship. Ibrahim Boubacar Keita, the country’s current President, was elected in 2013.

Northern Mali is currently a conflict zone. The Tuareg Rebellion of 2012 sparked violence in the region. After the end of the Libyan civil war, fighters who had participated in the war, returned to Mali. Rebels whose aim was to secede from the Malian state were armed by the outflow of weapons from Libya. By 2012, northern Mali had been completely captured by rebels. Various militant Islamic groups took advantage of the turmoil and established a presence in the region.

In 2012, then-President Amadou Toumani Toure was overthrown in a military coup, however, power was returned to a civilian government after an intervention by the Economic Community of West African States (ECOWAS). France and other African states intervened in northern Mali in 2017 and helped the state take back some of the region. 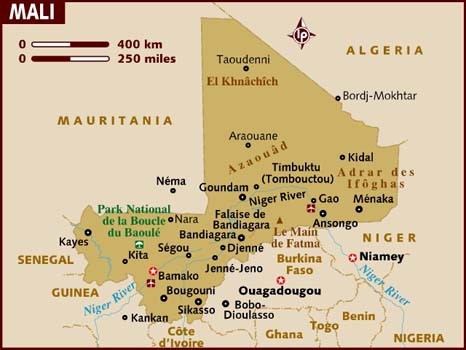 Mali still faces high levels of insurgency and terrorism. The al- Mulathamun Battalion and the Ansar al-Dine (AAD) have headquarters in northern Mali. Regional terrorist groups including al-Qa’ida and its affiliates have carried out attacks in the country.  Additionally, as a result of the Tuareg rebellion, the country is home to over 47,000 internally displaced persons. Mali is also a hub for regional migration flows, and thus struggles to combat trafficking.

On Tuesday, Amnesty International released a report claiming that a mass grave uncovered in the Mopti region of central Mali included the bodies of six people arrested by the military days earlier. The agency called this a “grim confirmation that the security situation in the region has reached a crisis point.” This has raised concerns of possible human rights abuses by Mali’s military. “Military forces fighting armed groups have also committed crimes under international law including extrajudicial killings, enforced disappearances and arbitrary arrests,” the organisation said.

Mali’s military has denied allegations that it violates human rights. “I see in these allegations that the international community is trying to justify its presence in Mali,” army spokesperson Colonel Diarran Kone said. “The facts in question took place in an area of great community tension and it may be civilians who killed each other.”

The agency added that Jihadists have grown increasingly bold in their attacks on civilians, killing 65 people in explosions this year. Attacks on schools and teachers have increased, causing hundreds of educational institutes to shut down. Amnesty estimates that 214,000 children have been deprived of education as a result, and that citizens are “living in fear.” ““We are urging the Malian authorities to investigate reports of enforced disappearances and extrajudicial killings of civilians in the central region,” said Amnesty International’s West Africa researcher Gaetan Mootoo.

Mali is part of a new military force called the G5 Sahel, which includes 5 West African nations: Chad, Burkina Faso, Mali, Mauritania, and Niger. France has deployed 4,000 troops to counter militant activity in the region in coalition with the G5, and the UN maintains a presence in the region.

Our assessment is that security in Mali is deteriorating steadily. It is evident that the country is still facing the fallout of events sparked by the Libyan civil war. We believe that any human rights abuses must be addressed, and the safety and security of Malian citizens must be ensured. Additionally, the international community could provide support to counter growing Jihadist activity in the region.