The air pollution in the capital city of Delhi has continued to hover in dangerous levels disrupting life in the region. Delhi High Court has issued emergency directions to curb the..

The air pollution in the capital city of Delhi has continued to hover in dangerous levels disrupting life in the region.

Pollution is described as the introduction of contaminants into the natural environment. Pollutions often leads to adverse changes in the environment. It can be chemical substances or energy, such as noise, heat or light. Pollutants, the components of pollution, can be either foreign substances/energies or naturally occurring contaminants. Air pollution has existed dating back to prehistoric times when man created fire. However, the onset of urban pollution began with the burning of coal and wood. It was Industrial Revolution that began in the 18th century that gave birth to environmental pollution as we know it in modern times.

On 06 November 2016, it was reported that Delhi’s pollution touched a new high; tiny particulate matter, known as PM 2.5 crossed the 900 mark (15-times the permissible level), in several monitoring stations, in the city. Classes were suspended for 3 days, in 1800 schools, of the three municipal corporations. The immediate cause of the crisis, is being attributed to Diwali firecrackers, burning of paddy straw, in neighboring states and peculiar no-wind conditions, over the city. 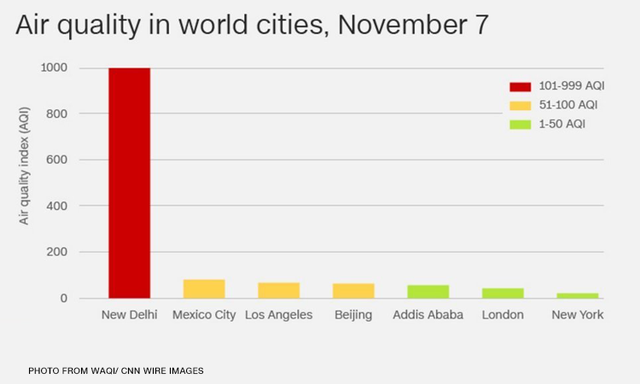 On November 7th, 2017, Delhi was covered in smog. The air quality in the capital city of India and the world's most polluted capital has reached hazardous levels. The US embassy website said levels of the fine pollutants known as PM 2.5 that are most harmful to health reached 703 -- well over double the threshold of 300 which authorities class as hazardous.

In the days that have followed, the pollution levels in Delhi have continued to rise and the smog has not dissipated. The Delhi high court then issued emergency directions to curb killer fog in Delhi. The bench said, “What we are facing today has already been faced by London. They call it a pea soup fog. It is a killer. Stubble burning is the visible villain in it, but there are other elephants in the room”. It said the fog was a "deadly mixture of vehicular pollution, construction and road dust and stubble burning."

In the past, the Delhi government has initiated the “odd-even” rule in a bid to curb pollution. According to this rule, vehicles that end with even numbers on the number plate will be allowed on the streets on one day and on the alternate day, vehicles with odd numbers on the plate will be allowed on the street. A report has stated that the Delhi government will again instating the plan in order to check the pollution levels. It will reportedly be implemented from November 13 to November 17.

Most recently, the Central Pollution Control Board (CPCB) had a score of 487 out of 500 in terms of Delhi’s air quality index. If the score touches 500, there may be further plans to stop construction work entirely across the city to rein in the pollution levels. Meanwhile, schools have been shut down and runways also had to be shut down thus affecting operations of the Delhi airport.

Madhavan Rajeevan, secretary, ministry of earth sciences, tweeted: “Delhi smog is not localised as seen in satellite image. Stable atmospheric and wind conditions favour severe pollution. Stable conditions are likely to continue next 2-3 days, which can trap smog close to surface. Weather only a modulator, source however man made. Take care.”

The bench has also ordered the government (Union Environment Secretary) to hold a meeting in the next three days. They want the chief secretaries in Delhi, Haryana, Punjab and Uttar Pradesh to come up with a comprehensive plan to battle air pollution.

Our assessment is that air pollution in Delhi is a threat to the millions of people living in the city. It will be particularly devastating to the homeless population who will not be able to escape the toxic pollutants. India has recorded the maximum number of deaths due to pollution. In 2015, 2.5 million Indians died for reasons that can be connected to pollution. It is imperative that the government implements tried and tested programs that will curb air pollution not only in Delhi but across the country.