Over the past few weeks, reports have indicated that the Indian government may be preparing to ban all private cryptocurrencies. The ban is believed to be a part of the 'Cryptocurrency and Regulation of Official Digital Currency’ bill, which will be introduced in the Winter session of Parliament.

In 2018, the RBI had released a circular which instructed banks to make sure that any customers dealing in crypto were not allowed to access banking services. This circular was meant to discourage Indians from participating in the crypto market. The RBI had adopted this position because it was concerned about the risk posed by unregulated private currencies on the financial system. It had also flagged concerns like money laundering and consumer protection.

However, this circular was overturned by the Supreme Court of India. The Internet and Mobile Association of India (IAMAI), which had filed a case before the Apex Court, pointed out that the RBI does not have the authority to prohibit economic activity. IAMAI had also stated that the ban would amount to an infringement of fundamental rights. Despite the favourable ruling by the Supreme Court, however, experts noted that it would only be a temporary reprieve for cryptocurrencies. The Parliament could always enact a law that reversed this decision. 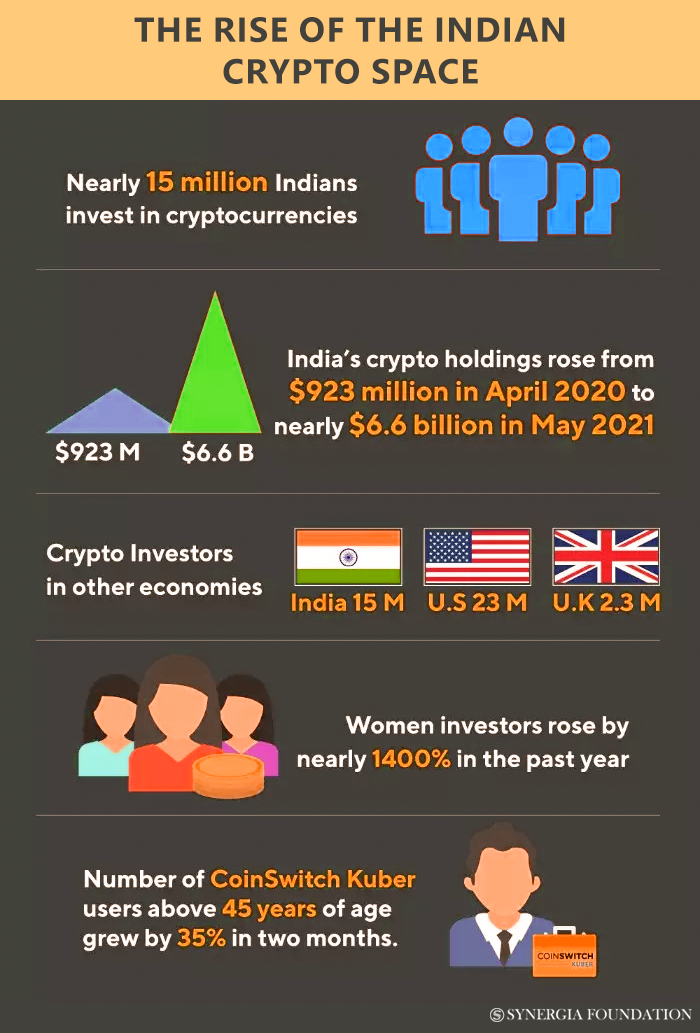 Typically, cryptocurrencies are decentralized digital money, free from the control of intermediaries like commercial banks. They are also not controlled by any central authority like the RBI. All cryptocurrencies run on their own blockchains; blockchains can be compared to bank ledgers. It keeps a record of every transaction. However, unlike a bank, the blockchain is distributed across all participants in the network.

Thus, Crypto is the first real alternative to the traditional banking system. The main features that genuinely set it apart are transferability, portability, privacy, security, and transparency. However, skeptics point out that the lack of a central regulation is a major concern, as crypto can be used to finance illegal activity.

Currently, we are witnessing extremely rapid growth within the crypto sector in India. In August, 2021, the country had ranked second in the world in terms of cryptocurrency adoption rate. In this context, the government’s attempts to ban crypto have raised eyebrows, especially when there is so much activity in the Indian market.

However, an Inter-Ministerial Committee tasked with researching on crypto, has raised a few legitimate concerns. According to it, crypto may impact a country’s monetary policy since there are no central regulators. This, in turn, may negatively affect macroeconomic stability. The committee has also cited fears of fraud and hacking. As per a study by Ernst and Young, around 400 million dollars out of the 3.7 billion dollars raised in crypto offerings have been stolen. Consumer protection has also been cited as a concern because of how volatile the crypto market is. Many see the market as a giant bubble, which could lead to massive loss of public money.

Meanwhile, a mere announcement of the crypto prohibition bill has affected the market, with prices of currencies falling beween 10-20%. However, the markets have also recovered quickly. According to Glen Goodman, a crypto expert, the impact has been relatively small. Even the Chinese prohibition has not been able to significantly hurt the market.

As can be recalled, China had claimed that its primary reason for banning crypto was illegal activity. It had also cited risks to national security and social stability. However, critics point out that the decentralisation of currency is perceived as a threat to China's central power, which has prompted it to issue a prohibition. Meanwhile, it has sought to promote its own Digital Yuan. It remains to be seen if India adopts a similar strategy.

For now, the proposed bill has explicitly stated that India is looking to ban private crypto to “facilitate a framework for creating the official digital currency”. Like China, India also appears to favour the roll out a digital rupee, which could be subject to the Central Bank’s monetary policy.

Many believe that the Indian government should regulate crypto, instead of outrightly banning it. Although the bill indicates that the underlying technology will be promoted, it remains to be seen how this plays out. Meanwhile, crypto proponents have pointed out that physical cash can have equally adverse consequences. Although it has scalability issues, it remains the most anonymous method of transaction and will continue to be used to fund a majority of criminal activity.