A recent airstrike in central Syria has wrecked the hospital considered to the safest hospital in the country. Meanwhile, the main hospital in the city of Afrin has been struggling to provide medical support to the injured amid dwindling supplies.

Over the span of several centuries, Syria, which was at the forefront of the Islamic Caliphate witnessed multiple invasions and occupations. The Romans to the Crusaders and the Turks have tried to gain control of the region.

In 1946, the modern state of Syria was born when it got its independence from France. A country of fertile plains, high mountains and deserts, it is home to diverse ethnic and religious groups, including Kurds, Armenians, Assyrians, Christians, Druze, Alawite Shia and Arab Sunnis. The majority of Muslim population in Syria is made up of Arab Sunnis.

The Syrian Civil War has been going on since 2011. It began during the Arab Spring protests and due to resentment towards the government of President Bashar al-Assad. The war is being fought by several factions: the Syrian government and its allies, a loose alliance of Sunni Arab rebel groups (including the Free Syrian Army), the majority-Kurdish Syrian Democratic Forces (SDF), Salafi jihadist groups (including al-Nusra Front) and the Islamic State of Iraq and the Levant (ISIL), with a number of countries in the region beyond being either directly involved, or rendering support to one or another faction.

The United Nations Special Envoy for Syria, Staffan de Mistura, has been at the center of all efforts to bring the parties to the negotiating table and put an end to the war. Previous rounds were held between 23rd February to 3rd March 2017; 23rd March to 31 March 2017; 15th May to 19th May 2017 and 10th July to 14th July, 2017. The eighth round of negotiations concluded on December 14th, 2017 ended in a stalemate with lack of progress. 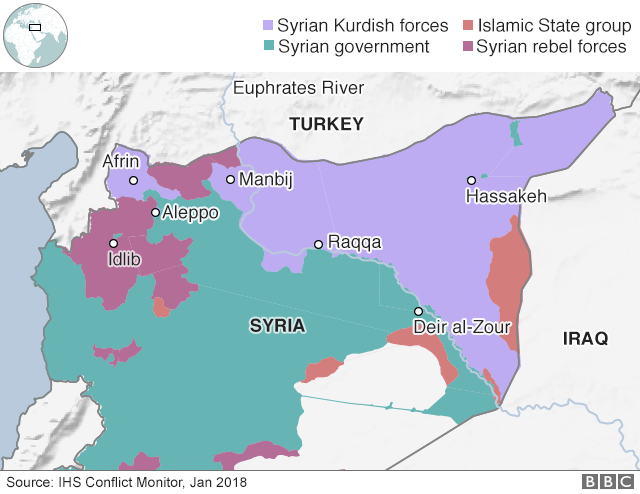 Violence has continued to affect the lives of millions in Syria. Airstrikes are common in the region and so is the loss of life. In November 2017, airstrikes and shelling in two separate cities in the country resulted in the deaths of 57 people. Those fighting in the region have argued that the airstrikes are only conducted in areas that are controlled by ISIS.

In 2018, the violence has further escalated. In January 2018, Turkish forces entered northwestern Syria as they continue to attack a Kurdish militia called the YPG. The Turkish government has repeatedly noted that this group is a "terror army" that presents a danger to Turkish security. The various factions fighting within the region have further complicated matters. Even though Turkish forces are fighting YPG, the group is considered a key ally by the US in the fight against ISIS.

Recently, it was confirmed that a hospital in a rebel-held part of Syria was hit in an airstrike and has been wrecked as a result. The hospital was located in central Syria in the Hama province. It is unclear who conducted the airstrike presently. Russian and Syrian governments have repeatedly denied targeting civilian regions in the past.

"It's widely believed to be the most secure hospital in Syria," UOSSM spokesman Avi D'Souza told the BBC. This is because the hospital was built 20metre under rock. No deaths have been reported as a result of this strike and the staff was evacuated.

Meanwhile, the main hospital in the city of Afrin (Syria) is also struggling. It had taken in 48 people killed and 86 wounded in recent Turkish attacks. Dwindling medical supplies have made it difficult for professionals to treat the wounded. In addition, the UN has noted that has been unable to supply aid to key regions in dire need. Also, on Thursday, the United Nations' Humanitarian Co-ordinator for Syria warned that diplomatic efforts to get aid into the country had become "totally impotent". "The last convoy to a besieged area was at the end of November," said Jan Egeland. "We need an end to the fighting and we need to have Russia, Turkey and Iran again get de-escalation."

Our assessment is that the multiple conflicts playing out in Syria has resulted in a humanitarian crisis in the region. The dearth of medical supplies can result in a catastrophe leading to the deaths of civilians as well. Agencies have struggled to provide aid to the embattled region.