According to data from the World Health Organization, India has 14 out of world’s 20 most air polluted cities in the world. Delhi and Varanasi are among the most polluted regions in terms of PM2.5 levels. The data released is for pollution levels that were studied from 2016.

The WHO says nine out of 10 people on the planet breathe polluted air, and it kills 7 million people each year.

Pollution is described as the introduction of contaminants into the natural environment. Pollution often leads to adverse changes in the environment. It can be chemical substances or energy, such as noise, heat or light. Pollutants, the components of pollution, can be either foreign substances/energies or naturally occurring contaminants. The onset of urban pollution began with the burning of coal and wood. It was the Industrial Revolution that began in the 18th century that gave birth to environmental pollution as we know it in modern times.

According to a World Health Organization report, 92% of the world’s population lives in places where air pollution exceeds safe limits. Many nations have established tax cuts and subsidies to promote electric vehicles. In the European Union, as of 2011, 15 member-states provided economic subsidies in varying degrees. Today, environmental pollution is the single largest cause of disease and death in low and middle-income countries.

The Lancet Commission published a report in the Lancet that revealed that pollution results in the deaths of millions of people annually. The report also notes that it also incurred economic damage amounting to $4.6 trillion. The study found that India in particular recorded the highest number of deaths across the world due to pollution. In 2015, 2.5 million Indians died due to non-communicable diseases, including strokes and lung cancer, caused by pollution. China came second in the list having recorded 1.8 million such deaths. According to the Chinese Ministry of Health, industrial pollution has made cancer China’s leading cause of death. Every year, ambient air pollution alone killed hundreds of thousands of citizens. 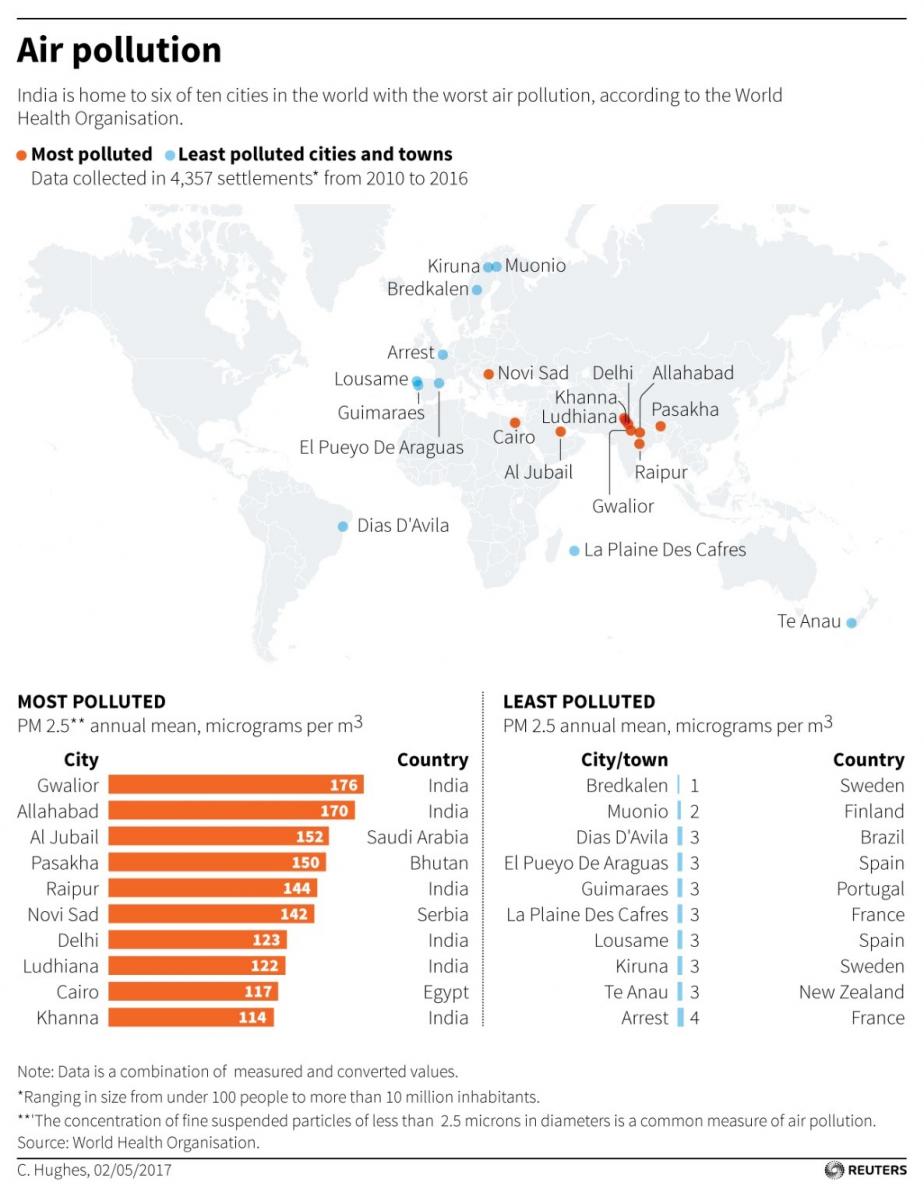 Kanpur, Faridabad, Gaya, Patna, Lucknow, Agra, Muzaffarpur, Srinagar, Gurgaon, Jaipur, Patiala and Jodhpur are also among the most polluted cities with high levels of air pollution.  The ranking that has been published is based on studies of 4,300 cities from around the world.

Chinese cities such as Xingtai and Shijiazhuang and the Saudi refining hub at Jubail have also been ranked as highly polluted in terms of their air quality.

In 2013, China came up with a five-year plan to clean up the country’s killer air. The nation set aside $277 billion for the initiative and set key targets to reduce air pollution particularly for Beijing. The government planned to reduce air emissions by 25% by 2017 compared with 2012 levels in those areas. After a crackdown on polluters and a sustained period of favorable weather, the country has reportedly met its target for Beijing for 2017.

Neira added, “We would be very happy if we would see a similar movement now in India which is one of the countries for which we are particularly concerned, although there are good initiatives which can be put in place quickly, still the levels are very high and we would like to see a similar decision and leadership.”

WHO chief Tedros Adhanom Ghebreyesus has noted that while air pollution affects everyone in the world, it disproportionately affects the marginalized. “Air pollution threatens us all, but the poorest and most marginalized people bear the brunt of the burden,” he noted.

On November 7th, 2017, Delhi was covered in smog. The US embassy website said that the levels of the fine pollutants known as PM 2.5 that are most harmful to health reached 703 – well over double the threshold of 300 which authorities class as hazardous. It had negatively affected those working outdoors as well as the homeless population in the city.

Our assessment is that the Indian government has to address air pollution as a clear and present danger to Indian society. The nation should commit to transitioning to clean fuels and technology in various facets of life including Indian homes. There are lessons to be learnt from the aggressive approach adopted by China to counter air pollution in the region.