With President Jacob Zuma forced out of the leadership of his own ruling party, it falls to the new leader Cyril Ramaphosa to lead the uphill battle of restoring the public trust in the party and..

With President Jacob Zuma forced out of the leadership of his own ruling party, it falls to the new leader Cyril Ramaphosa to lead the uphill battle of restoring the public trust in the party and the office of the President which over the last decade has become embroiled in a number of corruption scandals. 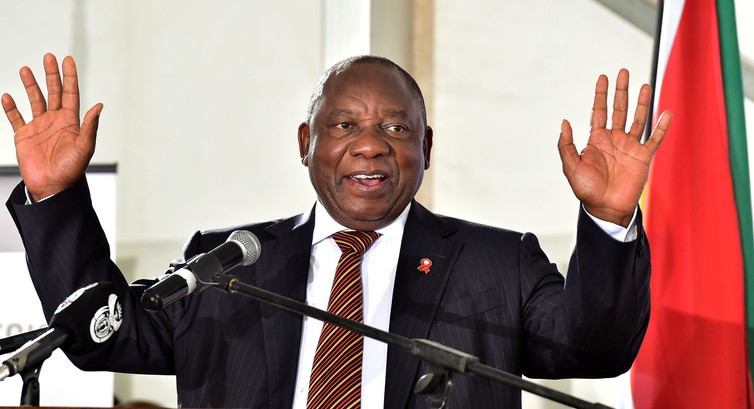 Yesterday, Cyril Ramaphosa, a venerable and well respected statesman both within the Africa National Congress (ANC) and South Africa in general was elevated to the role of president within the party leadership. Mr Ramaphosa, 65, has served as deputy president of under Jacob Zuma since 2014. He is well respected within the business community and has taken an outspoken stance against corruption.

He is a notable anti-apartheid activist who worked with Nelson Mandela throughout the 1980s & 1990s and also led the formation of South Africa’s new, post-apartheid constitution.  When Nelson Mandela stepped down it was expected that a popular trade unionist like Ramaphosa would be an ideal choice to be his successor. However, due to pressure from other anti-apartheid leaders, the leadership of the ANC was passed to Thabo Mbeki instead.

Now a businessman, industrialist and one of South Africa’s richest men; two decades later, Ramaphosa’s time for a chance to lead the nation appears to have arrived. In a vote of 2,449 to 2,261 Ramaphosa was able to edge out the other front-runner for the party presidency, Nkosazana Dlamini-Zuma, a former cabinet minister, President Jacob Zuma’s ex-wife and, surprisingly to some, his choice for successor.

Despite his victory, it remains to be seen whether Ramaphosa will be able to carry through with his promises to fight corruption in South Africa. There are calls from some quarters to have the new ANC president call for a special inquiry into allegations that Jacob Zuma misused the power of his office and profited illegally from business dealings he is said to have had with the Gupta family, who are a prominent family of businessmen and industrialists in South Africa.

The small margin of victory that Ramaphosa had over Jacob Zuma’s pick for his own successor shows clearly that, despite the allegations of wrong-doing, Zuma remains a relatively popular, if divisive, leader. Party opinion is split right down the middle and for the time being, Ramaphosa will be somewhat limited in just how much he can change within the party.

Outside his party however, things currently look good for Ramaphosa, with general elections for the presidency of South Africa set to take place in 2019, he has plenty of time build up a strong campaign to secure another term in office for the ANC and his first term as President of the country.

While there were rumors that Ramaphosa could use his new mandate to remove president Zuma from office, given that some of the other senior ANC leadership remain loyal Zuma supporters, it is unlikely that Ramaphosa could make any move against Zuma or his alleged collaborators without facing intense resistance within the party.

Internationally, China has a great deal of interest with working with South Africa, which it has invested in significantly as part of its effort to expand its influence in the region. Ramaphosa, being a savvy businessman, should prove to be an acceptable to China, though his trade unionist background may influence their relationship when it comes to certain issues, such as the fact that many major infrastructure projects being built throughout Africa are constructed with Chinese labor rather than by the indigenous workforce.

Our assessment is that if Mr. Ramaphosa, who is likely to be running on a reform platform, is able to secure another term in power for himself and the ANC, he will be able to consolidate his power within the party and start pursuing his agenda. Despite the recent diminishing of its popularity, the ANC is still the dominant force in South African politics and now that the ANC has chosen its new leader, Ramaphosa remains the favorite come 2019.