A cure to HIV Aids?

According to doctors in France, a drug used to particularly treat cancer could help eradicate HIV-infected cells in people with the Aids virus. The drug called as nivolumab is..

According to doctors in France, a drug used to particularly treat cancer could help eradicate HIV-infected cells in people with the Aids virus.

The drug called as nivolumab is generally used to treat lung, kidney or skin cancer.

HIV is a virus that attacks the immune system. If untreated, a person’s immune system will eventually be completely destroyed. The virus destroys a type of white blood cell in the immune system called a T-helper cell, and makes copies of itself inside these cells. T-helper cells are also referred to as CD4 cells. If too many CD4+ cells are destroyed, the body can no longer defend itself against infection. The last stage of HIV infection is AIDS (acquired immunodeficiency syndrome). People with AIDS have a low number of CD4+ cells and get infections or cancers that rarely occur in healthy people. These can be deadly. The drugs used to treat HIV are called antiretrovirals (ARV). These drugs are always given in combination with other ARVs. This combination therapy is called antiretroviral therapy (ART).

There are three main stages of HIV infection: acute infection, clinical latency and AIDS. HIV is transmitted by three main routes: sexual contact, significant exposure to infected body fluids or tissues, and from mother to child during pregnancy, delivery, or breastfeeding (known as vertical transmission). According to UNAIDS, there were approximately 36.7 million people worldwide living with HIV/AIDS at the end of 2016. Currently only 60% of people with HIV know their status. The remaining 40% (over 14 million people) still need to access HIV testing services. Most of the people who have been living with HIV Aids come from poor income nations. Large portion of the population come from sub-Saharan African nations.

World AIDS Day, designated on 1 December every year since 1988, is dedicated to raising awareness of the AIDS pandemic caused by the spread of HIV infection, and mourning those who have died of the disease. 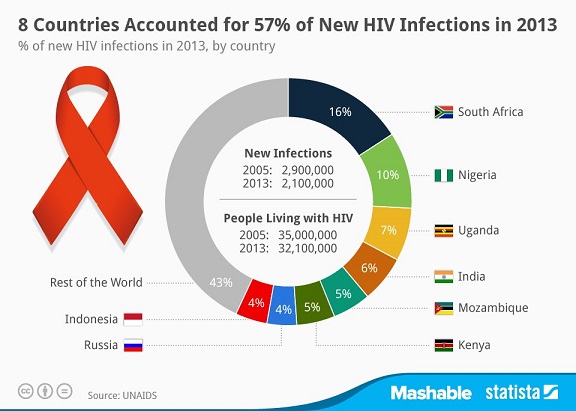 In 2016, 1 million people died of AIDS-related illnesses. However, scientists have revealed that a specific kind of cancer drug could effectively treat the HIV virus. Research found that it reduces the reservoir of dormant HIV cells in the body and boosts the immune response of a patient.

“This is the first demonstration of this mechanism working in humans. It could have implications for HIV patients, both with and without cancer, as it can work on HIV reservoirs and tumour cells independently,” said Prof Jean-Philippe Spano, head of the medical oncology department at Pitié-Salpêtrière Hospital AP-HP in Paris, who led the research. “The absence of side effects in this patient is also good news, and suggests this could be an optimum treatment for HIV-infected patients with cancer.”

The drug is normally used to treat lung, kidney or skin cancer. “Increasingly, researchers have been looking into the use of certain drugs that appear to re-activate the latent HIV-infected cells,” said Spano. “This could have the effect of making them visible to the immune system, which could then attack them.” The researchers have published their findings in the journal Annals of Oncology. The study was based on findings from a 51-year-old man who has had HIV since 1995. He was also being treated for lung cancer. After relapsing less than six months after surgery and first-line chemotherapy, he was given the drug nivolumab. However, the research about this drug is still at a nascent stage. The team has noted that another patient with HIV who was administered nivolumab did not witness a similar drop in the reservoir of dormant cells.

Our assessment is that it is possible that immunotherapy drugs could reinvigorate an immune system that has become tired of fighting HIV.  The challenge is to wake up the virus, any virus that wakes up gets killed. However it’s too early to conclude that a treatment that works for cancer could work for HIV too.