Considered by many as the future of finance, crypto also has a dark side. Its apparent anonymity, combined with ease of transactions, makes it ideal for cybercrime, fraud, money laundering and the dark web marketplace. Even worse, and an aspect that states fear the most, it can be a source of terror financing.

Towards the end of 2020, the value of bitcoin had started to increase at an exponential rate. Cryptocurrencies were gaining immense popularity; valuations were hitting record highs, and so were transactions. Although legitimate transactions had been growing rapidly, so were illegal ones. In 2020 alone, nearly 8 billion dollars worth of illicit transactions happened through cryptocurrencies. In 2021, crypto and digital assets, in general, became significantly more mainstream.

The total value of cryptocurrency transactions grew by nearly 600 per cent, which meant that the total amount of illicit transactions also increased. In 2021, about 14 billion dollars worth of illegal transactions happened through crypto. This rise in criminal activity through crypto was bad news for law enforcement, as blockchain technology had changed how investigations need to be carried out.

In fact, law enforcement officials have been investing more and more resources towards investigating criminal crypto activity in recent years. Policymakers will need to understand the motivation behind using crypto and the consequences of deploying this technology. 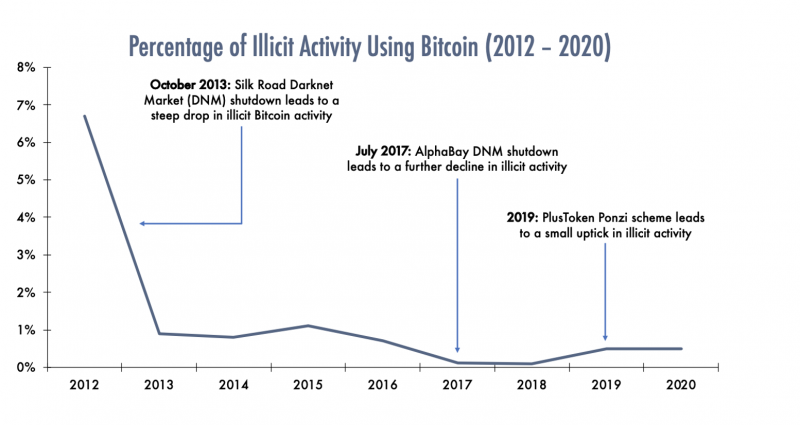 According to Chainalysis, as of early 2022, 10 billion dollars worth of crypto are being held in 'illicit addresses'. These are wallets that are linked to criminal activity. As more criminal activity occurs through crypto, it will harm mainstream adoption and change regulator attitudes, leading to heavier restrictions.

The rise of DeFi (decentralised finance) has allowed people to access funds (lending and borrowing) without going through traditional banks. This, in turn, has resulted in the proliferation of new criminal activities. In fact, DeFi has been riddled with stolen funds and other scams. In 2020, a total of 162 million dollars worth of crypto had been stolen from DeFi, and in 2021, this number jumped to 2.3 billion. This represented over 70 per cent of all money stolen from crypto in 2021.

Between 2020 and 2021, laundering money through DeFi nearly increased by 2000 per cent. Cryptocurrencies were more vulnerable to criminal activity, especially money laundering. Once criminals had opened crypto wallets online, they could move fiat currency into this system. The fiat money that was initially moved was "dirty money". This was then cleansed within the cryptosystem using mixers, tumblers, and chain hopping (services, tools, and methods used to split up crypto). Money was moved from one currency to another across exchanges; the idea was to create a trail that was virtually impossible to track. Once the trail went dead, the crypto could be converted back to fiat money at offshore banks.

There are a few reasons why crypto is so attractive to criminals. Anonymity is a critical factor. Although all transactions are stored on the blockchain (public ledger), the identities of the people making the transactions remain unknown. Secondly, there is no need for a third party. If there is no mediator to validate the transactions, there are usually no delays, and criminals do not have to worry about interacting with these mediators. Since crypto is entirely digital, this means that storage is highly convenient. Typically, criminal activity is carried out in cash, which is extremely difficult to store in large quantities. Finally, crypto is completely borderless.

Although terrorist financing makes up a small number of illegal crypto transactions, it is not something we should overlook. According to an analysis carried out by Coinbase, the militant organisation Hamas has raised a significant amount of money through crypto. As of September 2021, Hamas has collected nearly a million dollars through bitcoin donations (using one single donation address). From the beginning of August 2020, we have also seen that terrorist groups are collecting more through altcoins (any coin that is not bitcoin). Although centralised exchanges can block crypto addresses associated with terrorism, it remains unclear how this can be done in completely decentralised exchanges.

Last year, at the UN Security Council, India had raised concerns about how cryptocurrencies and other new technologies are helping terrorists to raise funds. Rajesh Parihar, First Secretary, India's Permanent Mission to UN, had asserted that there needs to be a PPP (public, private partnership) approach to identify and stop terrorism financing. He also stated that resources have to be allocated to watchdogs such as the Financial Action Task Force (Force). Moreover, the United Nations needs to specifically call out nations that help in providing such finances to terror groups.

Many Asian States are already falling behind the FATF's guidelines to ensure that money laundering and terrorist financing are curbed effectively. Countries such as the Philippines and Indonesia are not meeting the FATF's targets. Although they recognise the risk presented by crypto, they are not doing anything about it.

As mentioned before, crypto is both anonymous and global, making it extremely attractive for terrorists, particularly at the grassroots level. It allows local terror hubs to secure money through donations. In fact, it is the perfect tool for terrorist organisations, which are always looking for a strategic advantage. For instance, the Islamic State group was able to transfer crypto towards the Mindanao region (a conflict area) without the knowledge of the Filipino government. As terrorist organisations experiment more with crypto, governments worldwide will have to upgrade their anti-terrorist financing infrastructure.

Despite the anonymity, it is also argued that crypto gives law enforcement significantly more data when compared to cash. The date, time, amount, and wallet address are stored in the blockchain (although there are ways to scramble transactions). In comparison, cash transactions are almost impossible to trace.