CPEC and the Gwadar Port

The Gwadar Port, located in the Balochistan province of Pakistan, is a critical aspect of the China-Pakistan Economic Corridor, and an important part of China’s reach..

The Gwadar Port, located in the Balochistan province of Pakistan, is a critical aspect of the China-Pakistan Economic Corridor, and an important part of China’s reach into South Asia. China and Pakistan have signed $60 billion worth of infrastructure project deals, approximately 20% of the country’s GDP.

China’s One Belt One Road (OBOR) Initiative was announced in 2013. Hailed as a “21st Century Silk Road”, the initiative seeks to revive trade routes across Eurasia. OBOR has been publicised as a development strategy that involves huge amounts of physical infrastructure, including railroads, highways, ports, and pipelines. China claims that it will enhance financial linkages and increase cooperation across the landmass. According to the World Bank, OBOR has the potential to include “65 countries, 4.4 billion people, and about 40% of the global GDP”.

The proposed economic corridor is divided into the land-based Silk Road Economic Belt (SREB) and the 21st Century Maritime Silk Road (MSR). The land route is intended to stretch from central China through Central Asia and Russia, into Western Europe. The oceanic “road” includes ports and littoral infrastructure across South and South East Asia, the Gulf, and ends in East Africa and the Mediterranean.

The Belt and Road initiative has become a central feature of Chinese foreign policy. It underlines China’s goal to assume a larger role in international affairs, with Beijing as the centre of a global trade network.

The CPEC is one of the primary reasons India opposes the BRI. CPEC not only gives China access to the Gwadar port on the Arabian Sea, but also runs partly through disputed territory in Kashmir. 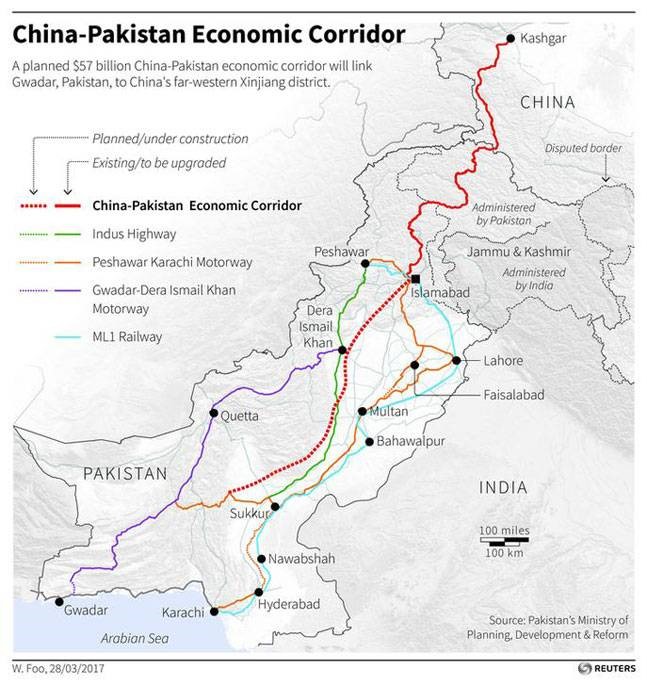 The CPEC has been hailed as a project that will reboot Pakistan’s stagnant economy and provide it with the tools to become a regional and international hub. The Gwadar Port, located near the Strait of Hormuz, is the most critical aspect of the CPEC. According to some estimates, one fifth of the world’s oil passes through the Hormuz strait that joins the Arabian Sea and the Gulf of Oman.

Leaders have claimed that the port could make Gwadar the “next Dubai,” and lead to the development of the region of Balochistan. China has been granted a 40-year lease of the port. Over the next four decades, 91% of the revenues from the port will go to Chinese Overseas Port Holding Company. The remaining 9% will go to Islamabad.

There has been increasing criticism of both OBOR and the CPEC. Balochistan is the largest province in the country, bordered by Iran to the west and Afghanistan to the north. The least populated region of Pakistan, Balochistan is also home to the Free Balochistan Movement, a separatist movement formed out of long-standing grievances of the local Baloch people. The people of this region have claimed discrimination by the Pakistani government.

Baloch citizens are among those within Pakistan who have protested joint ventures between Beijing and Islamabad, particularly the sale of Baloch lands in Gwadar for Chinese investment. Critics state that despite being the most underdeveloped region in the country, it has seen little Chinese investment. Only 2 of the 21 Chinese-sponsored energy projects are based in Balochistan, “despite the fact that the province suffers a shortfall of over 1,000 megawatts of electricity,” as noted by FT. Balochistan is the only province without a demarcated SEZ.

Experts have noted that the separatist movement in Balochistan may pose a security risk. Two Chinese nationals were killed in the region last year. “The main challenges… are posed by the security risks of sustaining a large Chinese presence in Balochistan,” said Joshua White, former director for South Asian affairs at the U.S. National Security Council. “China has demonstrated that it is highly sensitive to threats against Chinese citizens abroad, and even a small number of attacks or kidnappings could constrain the ambitions of China’s state owned enterprises operating in the area.”

However, Pakistani officials have maintained that the threat is contained. “The security situation has significantly improved” in Balochistan, Pakistani Prime Minister Shahid Khaqan Abbasi said in an interview earlier this year. Pakistani authorities have said that Chinese firms will start working on a $1.2 billion port expansion this June.

Some experts have also criticised what one analyst called China’s “creditor imperialism.” Reports have criticised BRI for its potential to create debt-sustainability problems, particularly in developing African and Asian nations. A recent analysis by Bloomberg News revealed that out of 68 nations that China has listed as part of the project, 27 have sovereign debt rated as junk. The debt level of at least 8 countries that are part of the project, including Pakistan, may exponentially increase, according to projections.

The IMF has repeatedly warned that Pakistan’s debt is unsustainable; its external debt is almost $90 billion. Last year, the government in Islamabad turned down Beijing’s offer of $14 billion in funding for the Diamer-Basha dam, in return for allowing the yuan to be used in the Gwadar Port free zone.

Pakistani officials have said that the CPEC will lead to “greater geo-economic cooperation and development by stronger regional connectivity.” It has maintained that the development of the Gwadar port will benefit Balochistan and its people.

China has argued in favour of this initiative, noting that it could potentially revive and boost the economies of multiple countries across the world, including Pakistan. Official Chinese mouthpiece Xinhua recently reported that the CPEC has provided 60,000 jobs to Pakistanis since 2015 and that it would create over 800,000 new jobs in different sectors up to 2030. “The 21 energy projects planned under CPEC will double Pakistan's current capacity of electricity production by producing 16,400-megawatt electricity after their completion,” it said.

Our assessment is that Balochistan is a strategically located region that could provide China and Pakistan with better access to the Hormuz strait, and increase Chinese presence in the Arabian Sea. The fact that China has secured a hold in Pakistan’s Gwadar port for 43 years and Sri Lanka’s Hambantota Port for 99, could be a cause for concern in New Delhi. As stated previously, we believe that the Belt and Road initiative will be a debt burden to countries who cannot repay the cost of loans, as was the case with Sri Lanka. Large-scale infrastructure projects must therefore take into account the developmental needs of a region.