Carlos Alvarado Quesada has decisively won the general elections in Costa Rica. He is slated to become the next President of the politically stable and prosperous region..

Carlos Alvarado Quesada has decisively won the general elections in Costa Rica. He is slated to become the next President of the politically stable and prosperous region.

The country of Costa Rica has coastlines on the Pacific Ocean and Caribbean Sea. It shares borders with  Nicaragua to the north and Panama to the south. It is considered to be one of the most stable countries in the region – both politically and economically. It is the only Central American state without a permanent standing army, after it was abolished in 1948

The economy of Costa Rica has been very stable for some years now, with continuing growth in the GDP and moderate inflation. Although the nation has grappled with high unemployment rate: 8.2% in 2016. The economy emerged from recession in 1997 and has shown strong aggregate growth since then. The estimated GDP for 2017 is US$61.5 billion, up significantly from the US$52.6 billion in 2015 while the estimated 2017 per capita (purchasing power parity) is US$12,382.

The region is best known as a widely beloved tourist destination. The tiny country is filled with beaches, mountain ranges, volcanoes and varied wildlife and is rich in biodiversity. 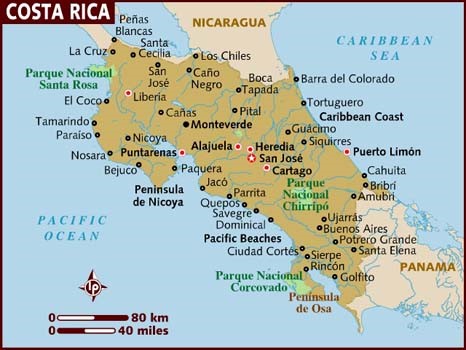 Carlos Alvarado Quesada is a Costa Rican writer, journalist, political scientist and politician and the President-elect of Costa Rica. He previously served as Minister of Labor and Social Security. In a decisive election, Quesada has decisively won the country’s presidential elections. He ran a progressive campaign in favor of gay rights among other policies.

With results from 95% of the polling stations, he is projected to have gotten more than 60% of all votes counted so far. He defeated conservative Protestant, Fabricio Alvarado Muñoz. Munoz, a former TV journalist, who is best known for religious dance numbers.

“My commitment is to a government for everybody, in equality and liberty for a more prosperous future,” he told thousands of cheering supporters blowing horns and waving Costa Rica’s red, white and blue flag. “There is much more that unites us than divides us.”

In contrast, Muñoz had vowed to restore what he called traditional values. He was anti-gay marriage and also vowed to restrict women’s access to abortions.  BBC reported, “In the end, Carlos Alvarado's experience as a minister for labour and social security minister under President Guillermo Solís appears to have stood him in good stead with voters concerned about rising unemployment.”

Fabricio Alvarado Muñoz has already conceded once information began pouring out of the polling stations.

Our assessment is that Carlos Alvarado Quesada’s once again solidifies Costa Rica’s reputation as a progressive nation that is known for its tolerant values. It could also indicate the rising support for gay rights in Latin America.