Venezuela, the nation with the world’s largest crude oil reserves, enjoyed political stability and sustained economic growth until a few years ago. In addition, the revenue generated from the export of its resources was invested directly in welfare programs, raising the standard of living in the country. However, in recent years, the country has suffered due to declining oil prices, global economic slowdown, international sanctions, and political instability.

In an attempt to end its political deadlock, Venezuela successfully signed an agreement promising to utilise UN-managed funds for humanitarian assistance and social programs. In return, the US Treasury Department eased sanctions on Chevron, the sole US oil corporation still operating in Venezuela. Chevron is a joint venture partner with a Venezuelan state oil business, but the US sanctions rendered the joint venture inoperable in recent years.

Venezuela’s current socio-economic crisis started a decade ago and worsened with a series of events. In 2013, Hugo Chavez, the country's former president, passed away from cancer. Nicolas Maduro, Chavez's handpicked successor, subsequently defeated Henrique Capriles, the candidate of the opposition coalition, the Democratic Unity Roundtable (MUD), to win the presidency.

Venezuela’s economic deterioration, inflation, and pervasive public insecurity started in January 2014 due to falling oil prices globally. Under the Maduro administration, the crisis worsened, and the country’s oil production slumped due to a lack of maintenance and investments. The National Assembly, governed by the opposition, proclaimed a "health humanitarian crisis" in January 2016. Despite declining oil prices, the government did not reduce expenditure; instead, it denied any claims of a humanitarian crisis and ruthlessly suppressed resistance. According to United Nations (UN) reports, the Special Action Forces were responsible for nearly 5,287 deaths in 2017 and at least 1,569 deaths in the first half of 2019. Extrajudicial executions by the Venezuelan government became prominent, and dissidents were not spared either.

If there's anything to be blamed, then it's Maduro's poor economic policies that led to a social and humanitarian collapse—eventually resulting in food insecurity, the second-worst migration crisis in history. As expected, the international community responded by mounting pressure on the dictatorship and supporting various opposition groups. However, the government decided not to be influenced by external pressure.

Under President Donald Trump, the US tightened its economic sanctions against Venezuela and handed Juan Guaido the power to seize control over the government. Guaido declared himself the interim leader of Venezuela in January 2019, claiming that he had the authority to establish a transitional administration since Maduro had returned in a fraudulent election in late 2018. The military has stayed faithful to President Maduro, whose socialist party also maintains a tight hold on the electoral board and the Supreme Court, despite efforts by Mr Guaidó to persuade them to support him. 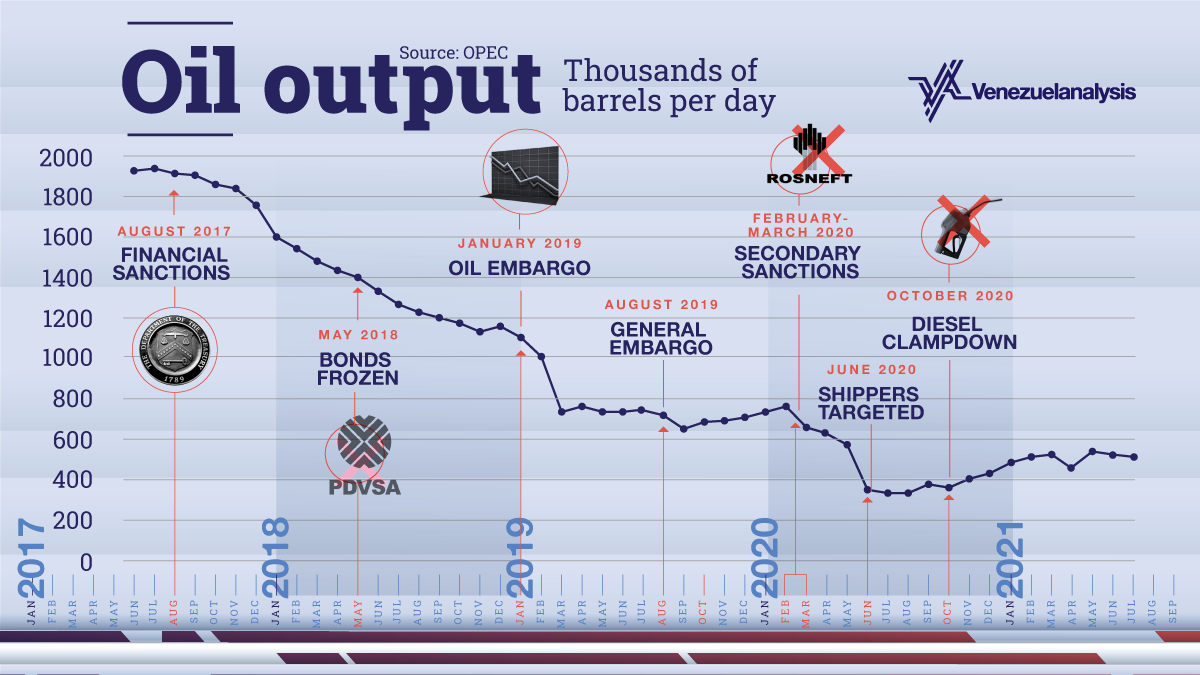 The Biden administration initially adhered to Trump’s position, but in March, just a few weeks after Russia invaded Ukraine, it initiated discussions with its Venezuelan counterparts. Although the official story from the US is that the decision to waive sanctions was a part of a more extensive effort to bring about political reconciliation in Venezuela, the energy crisis in Europe appears to have ignited the spark. Oil prices have skyrocketed due to the Russian invasion of Ukraine. Moreover, OPEC’s decision to lower oil production has exacerbated the oil crisis, forcing Western powers to search for alternate markets to procure oil. Therefore, allowing Venezuela to export more oil was one of the ways the US could ease its increasing fuel demand.

Undoubtedly, there are conditions attached to the relaxation of sanctions. Chevron can produce oil from its resources in Venezuela, but it should only be exported to the United States. Additionally, the license may be revoked at any time. Moreover, the profits made from the sale of oil should be used to settle the $4.2 billion debt owed by Petroleos de Venezuela SA (the government-owned oil corporation of Venezuela) to Chevron. The U.S.'s apparent U-turn is nevertheless a success for Mr Maduro. Although he has offered to start negotiations with the opposition, he has yet to make any significant accommodations. The American move might also lead European nations to review their stance on Venezuela. Foreign businesses coming home would enable Venezuela to increase its oil production and resume its developmental programs.

Although Mr Maduro appears to have resisted attempts by the West to isolate him, his bigger task is navigating through the domestic storm. His chance to win public support is tied to his re-engagement with other countries. In addition, Maduro will likely bring in more foreign investors to fix the significant economic issues in Venezuela that are partially a result of his actions.