Up until now, the climate crisis has been largely examined through the lens of economic development. However, it has also been linked to conflict and security in recent times. Climate experts are drawing parallels between high conflict zones and those that face climate change the most. The two issues are no longer being looked at as independent of one another.

Last December, Ireland and Niger had proposed a joint draft resolution before the United Nations Security Council (UNSC), which required the Council to treat climate crisis as a security issue. However, the resolution failed with Russia vetoing the proposal, China abstaining, and India voting against it.

One of India’s biggest reasons for voting against it was that the UNSC was an undemocratic forum. Therefore, inducting an issue as important as climate within the Council’s fold could prove to be a disadvantage for developing and underdeveloped nations. 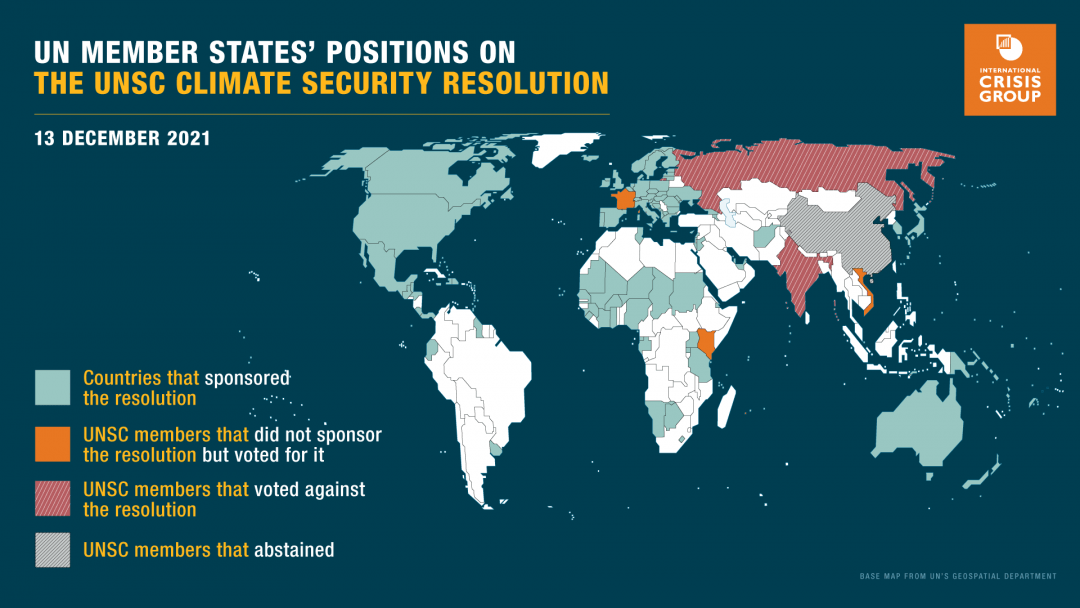 In the words of UN Secretary-General Antonio Guterres, "no one is safe from the destructive effects of climate disruption." Year after year, floods, landslides, deforestation, war, famines, forest fires etc., are forcing people to migrate to different places. This leads to an increasing number of migrants/asylum seekers and displaced persons. Climate also directly affects the world's geopolitical structure and influences foreign policy, and it can destabilise and irreparably alter the development of countries.

History has taught us that all wars are fought for resources. Climate is a factor that affects resource scarcity, causing unfathomable food, water and energy crises. This ultimately results in migration, trapping us in a vicious cycle of food and water scarcity. Countries need to realise that whatever their specific interests may be, climate action is the need of the hour and all short term and long-term interests must align with climate protection.

Resource scarcity not only leads to migration but also gives rise to terrorism. The lack of resources can plunge countries into poverty and causes political instability. This, in turn, can lead to the rise of militant groups exploiting this situation for their gains. Mr. Guterres has spoken about terrorist groups such as the Da’esh (Iraq) and Boko Haram (Nigeria) taking advantage of water shortage and weak governments to rise to power in their respective regions. This phenomenon has now been termed climate terrorism.

The UNSC represents the high table of the UN, from whose portals the P5 rule the roost. Its primary function is peacekeeping, security, and conflict resolution, it has often been criticised for not being a more democratic forum. Countries that contribute the most to global warming are the P5. Therefore, resolutions adopted in the Security Council could go against the interests of most Asian and African countries. While these nation-states are already more vulnerable to climate change, they could also face more economic and even political losses. While recognising the need for urgent steps on climate, India wants the issue to be discussed on a platform where all countries are viewed as equal stakeholders in climate action.

The Indian representative at the UNSC, Mr T S Tirumurti, has raised the issue of increasing terrorist organisations in African countries due to a lack of economic growth and resources. He, however, has called for climate change to be viewed as a separate issue altogether. According to him, clubbing climate and terrorism together and addressing it as a security issue would be ‘an oversimplification of the causes of conflict’, not leading to any concrete solutions.

The lack of empirical evidence is often cited to counter arguments that call for treating climate as a security issue. The unwillingness to address the climate-terrorism conundrum is because the climate is much more well-defined through economic factors. It is easier to financially quantify climate goals while curbing our economic activities, than defining national security through the lens of climate.

Moreover, the defence sector is a large contributor to climate change. A 2019 report by Durham and Lancaster University found that the U.S. Military as one of the largest climate polluters in history. If the UNSC regards climate as a security issue, the P5 countries should be the first to reduce defence expenditure. However, for each country, their national and geopolitical interests will take precedence as it has in the past, and climate goals will automatically take a back seat. No country, especially those in conflict areas, will risk slashing their military budgets in the name of climate.

This ultimately causes a cycle of climate destruction, increased security threats and more defence spending to counter the aforementioned threats. Therefore, when the climate is recognised as a security issue, the onus is on nuclear powers and countries with massive defence budgets to make the first move.